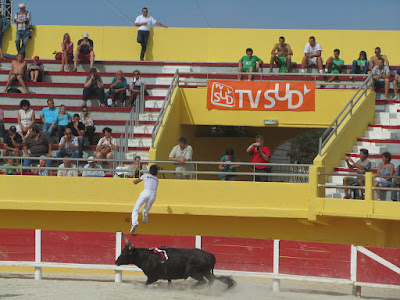 We found a table..when the gored man was taken past us on the street on a stretcher…
“Toro, toro!”, someone in the cafe yelled drunkenly and the man sat up. Everyone cheered, and then a young boy ran over with a glass of whiskey, which the man drank and then threw back empty to the boy….
“It’s a hell of a way to live, isn’t it?” Duff said.
“I can think of worse,” Ernest said.
…. The waiter brought gazpacho and good hard bread and some nice fish poached in lime, and though I didn’t think I would be able to eat after the sight of the goring, I found that I was hungry and that it all tasted very good to me.

from The Paris Wife by Paula McLain (2011)
#AmuseBouche amuse bouche