See also post on the actual walk and lunch afterwards in Jacques here.

Today, we start with this little statue of the Onion Seller. It was made in 1937 by Seamus Murphy to commemorate the traders here in Cornmarket Street but you’ll also have seen her twin over in Bishop Lucey Park.

The four bay double height Cornstore behind us has seen service as a cornstore and also as a potato and coal store. And, if you look up, you’ll see signs of it being a market and bazaar.

The Bodega stands on the site of St Peter’s Market. The main entrance was on North Main Street. It was completed in 1843 and became known as the Irish Market, its customers regarded as inferior to those of the English Market.

After years of decline, the Irish Market closed in 1916 and then saw service as a shell factory for British military. Later, after the various wars, it was revived as a market and stuttered along until its final closure in 1955.

Across the road, you’ll the Musgrave name, long associated with food and general trading in the city. More recently, the Rising Sons brewery opened here, one of a handful of brew pubs across the city.

Now we have the Saturday Market on the Coal Quay, which was indeed a quay. But water is never far away here, just below the floors of the premises, always a worry. Here you’ll see some lovely stalls including Kilbrack Farm from where Jacques get their organic vegetables.

Over the footbridge now and, off to your right, you have Iyer and his famous South Indian food. On the left, there is a newish Nepalese restaurant called Thali (meaning plate!).

On the corner of Shandon Street, for a few months this year and up to a few weeks ago, the corner building had been painted with butter wraps including names such as Lee Valley, Silver Churn, Freemount and Drinagh. Not anymore, for some reason. 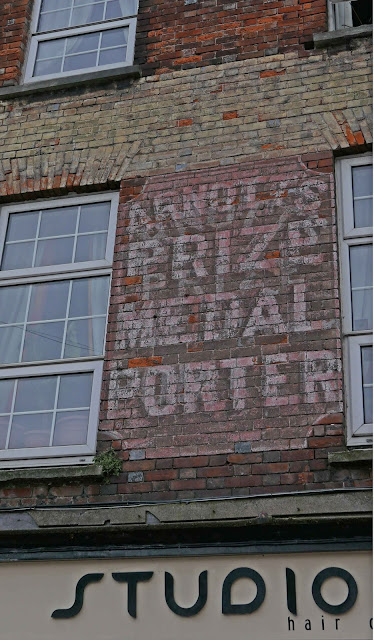 But a nearby advert has lasted much longer. Look up, above the hairdressers, and you’ll see the Arnott’s Gold Medal Porter sign. John Arnott was mayor of Cork for the first of three terms in 1859 and once owned the St Finbarre’s Brewery in the city.

He also operated a large bakery on the site for a few years and, according to the Beamish and Crawford history (by the O’Drisceoil brothers) he was also involved in the Cork Racecourse, linen manufacture, drapery and department stores and the Irish Times.

The brewery, bought from Abbott’s in the early 1860s, became best known as Arnotts. And provided strong competition for both Murphy’s and Beamish’s. In the end, Murphy’s prevailed and in 1901 took over and closed down the Arnott’s breweries.

Shandon Street was the spine of the city's commercial life in the 18th century. Such was the scale of the beef trade here that it was known as the slaughterhouse of Ireland.

And it wasn’t just Ireland. In 1756, France and Britain were at each other’s throats in the Seven Years War and “the Great Ox-slaying city of Cork” emerged as the Royal Navy’s preferred supplier for beef, pork and butter. 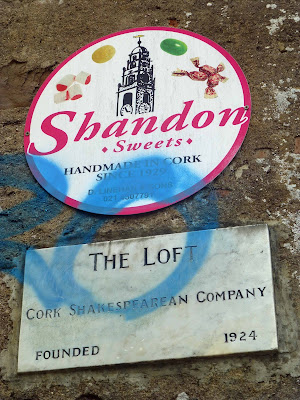 Let us head up now on the right hand of the street and, as we do, take a note of all the different cuisines available here. You’ll also find an info panel about some of famous people associated with the street. Turn right into Dominic Street and then go left by the Four Liars restaurant.

The Firkin Crane here was built on the site of Shandon Castle and is named after the small barrels in which butter was transported. Here the empty firkins were weighed, washed and repaired. They were used to export the butter to many areas of the world, especially where there was a British presence.

The Butter Exchange here was remarkable for its longevity, from 1770 to 1924. This Portico, a grand name for a porch, was built in 1849. By 1861, the Cork Butter Exchange became the largest butter exchange in the world. Exports peaked in the 1870s. After that it was in slow decline. Rigid in its ways, in ways that had previously served it well, it failed to react to foreign imports of butter into England and also to new developments in packaging.

The system itself, that included quality control and that had been remarkably successful for the best part of a century, now inhibited innovation and the end was nigh. You can find out all about the butter trade and the famous butter roads in the museum here.

And if you want some good old sweets, you may call here to the  Exchange Toffee Works, now known as Shandon Sweets. The Linehan family have been making the sweets here since the 1920s and nowadays the business is carried by Dan and Tony, a father and son pairing. Signs here too for the Loft Shakespearian Company (founded by Father Christy O’Flynn, a man that I knew) and the Butter Exchange Brass Band, and also Mother Jones.

Down now to the quay, via Mulgrave Road. Whitaker’s were established here on Mulgrave Road in 1905, to pack butter and eggs; they later started breeding and hatching their own stock, a natural progression. They are still going strong today in Carrigaline, rearing one million point of lay pullets annually.

But they started their breeding here in the heart of city, on Camden Quay by the Kiln River (covered in 1992). I have to admit I remember them and the excitement at home when the box of day old chicks arrived, having journeyed out of the city by train or bus. And they were dispatched to many parts of the country as I was reminded when I recently saw an advert in the Gaelic Week of January 11th 1969, the swinging sixties in Ireland.

Walk up now towards the brewery and after while you’ll see glimpses of the Kiln River. Cross by the traffic lights into Leitrim Street. In the run-down triangle of buildings (including O’Keeffe’s Bar), there once was a café called An Stad where I and many other secondary school students would stop (on our way from a match in the Athletic Grounds) for a doughnut and a glass of milk! Times have changed since the early 60s.

Walk now to the four-way junction of McCurtain Street, Bridge Street, Coburg Street and Patrick’s. Again back to the 60s (and further) when drovers guided herds of cattle through these streets on their way to the Innishfallen on Penrose Quay, cattle below, humans above, all on the way to the UK. When the cattle had passed, the streets didn’t smell well, didn’t look well. Lots of these drives were in the morning so, to cater for the drovers and the dockers, some pubs in the area, were able to get an early opening licence.

Down now over Patrick’s Bridge and stop at the top of Patrick’s Street, more or less opposite the entrance to Merchant’s Quay shopping centre. Take a look at another Seamus Murphy sculpture, one of his smaller works. You’ll have to lean down to see it at the base of the building, 124 Patrick St.

In the 1950s, there was a restaurant here called the Milk Bar (how times have changed!). The owner commissioned the sculptor to make a trough so the dogs could have a drink while their owners dined inside! 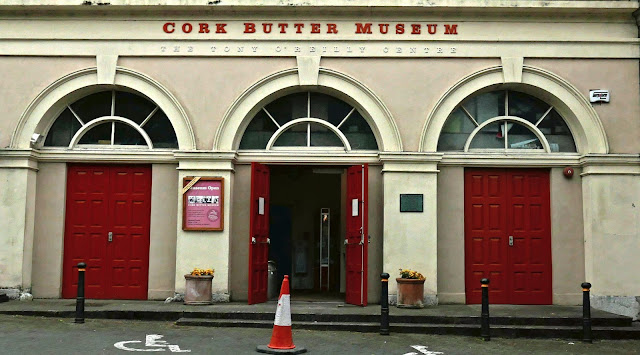