FEAST. On the Street. The Main Event


From the outset of the rebranded FEAST, Saturday had been billed as The Main Event. And the crowds of people up and down Midleton’s Main Street and side streets and in the Farmer’s Market, demonstrated just that. And, once again, the weather played its part, the odd shower no deterrent at all to those strolling and snacking, and those eating a tad more seriously at the long outdoor table opposite the Restaurant Tent where some eleven restaurants were selling delicious small plates at a fiver each.

But is wasn't just the restaurants. Lots of other food (Green Saffron were busy, as always) available as well under the mainly blue sky. Great too to see the local butchers, including Jim Crowley and Frank Murphy, on the street, bakers too and coffee makers. No shortage of sweet stuff as you made your way between the various hot-spots. 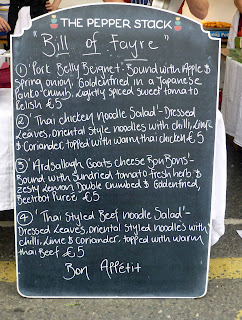 The Demo Marquee was a magnet as Bertha’s Revenge Gin, Patrick Ryan’s sourdough, and various chefs, including Ciaran Scully, Lilly Higgins, Kevin Aherne and Martin Shanahan kept the punters entertained. Down in the Distillery, you could enjoy a premium whiskey tasting and Carol Quinn’s talk on the  history of whiskey here for a tenner.

Opposite the restaurant area was where the long table was situated and just beyond there was a packed children's zone with music shows, puppet shows, and amusements. The siting of the table and the amusement space close together was great for parents and I saw more than a few taking turns at the table and then relieving the partner on child duty!

The regular Farmer’s Market was also buzzing. Maybe one day, all will be accommodated on Main Street but on Saturday the traders were doing well. Had a friendly word with the Lobsterman who I’d met in Rostellan the evening before. Baker Declan Ryan was, as ever, on duty at Arbutus stall while Noreen Conroy was as busy and as friendly as ever at Woodside Farm. Nearby, at the Courthouse, the friendly GIY folk were dishing out advice on what to grown, how to grow it and when.

Back on Main Street, it was hard to make choices. Would have been a gargantuan feat to sample something from all eleven restaurants! And that would leave out all the others. Tough. I had heard on the Twitter that Farmgate’s Chowder was a thing of splendour but by then I had had my fill.

One of the highlights was the Monkfish and chorizo flatbread served by head chef Kevin at the Samphire (Garryvoe Hotel) stand. The crab beignet by Pier 26 went down well. Jack and his team at the Granary Cafe stand were busy and their massive baked Rooster (with Ballinrostig nettle and  cream cheese and Gubbeen chorizo) was quite a treat and I also got a few pastries here to bring home.

Indeed, that bag for home filled rapidly. Included were the Mango, Peach and habanero chutney a new product from the Rebel Chilli lads, some garlic (including Avram, Lautrec, and Pink Marble) from West Cork Garlic, a bag of Honduran coffee beans from  Badger & Dodo and 30-day aged beef from Woodside. Happy out, as we headed west from F-EAST! Here’s to next year.
See other posts from FEAST 2017
Rostellan Chocolate Hosts FEAST
Ferrit & Lee. The Perfect Serve.
Sage Al Fresco