Night of the Long Table. Four Hundred Dine Out on Cork’s South Mall


Four Hundred Dine Out on Cork’s South Mall
A night out to remember for the over four hundred diners who gathered on Cork’s South Mall for an outdoor dinner, the second running of Cork’s Long Table. And the sun came too, making it a glorious occasion for the organisers and their partners including Bord Bia, Failte Ireland, Cork City Council and Cork Midsummer Festival.

There was a choice of drink on the way in, anything from Prosecco to cider to beer to a cordial. The first suppliers we met were Colm McCan (what a hat) and Pascal Rossignol of Le Caveau, helping out on the night.

A tasty oyster signalled the start of the serving and then came the Producers Boards with Smoked mussels and mackerel, crab with lemon mayo (perhaps my favourite), black and white pudding, spiced beef, crubeens and ham hock terrine, chutney, breads, mozzarella. That got us talking and sharing and there was something for everyone!

The mains meanwhile were being prepared in the kitchens of the nearby Imperial Hotel and distributed to the various staging posts on the pavement. It was worth waiting for, not that we were waiting at all. The rack of lamb with pea purée, salsa verde, mixed leaf salad and loads of superb British Queens, not forgetting Glenilen butter, was totally satisfying though a few of us volunteered for seconds when the opportunity arose.

And the dessert, a very generous one indeed, was Strawberries with crushed meringue, cream and rose petal, another delight. And to finish we had cheese: Milleens to remember the late Veronica Steele and Hegarty’s Cheddar.

All the while, the wine, the beer, the cider, whatever you fancied was being served and the brass band played. There was even a birthday surprise for Veronica, served up by fiancé Phil; all go for this couple who get married today. We wish them well!

Once announced, the Long Table Dinner sold out within hours, such was the feeling that this was going to be a good one. And once you saw the list of quality suppliers, you knew the basis was there for a terrific meal. 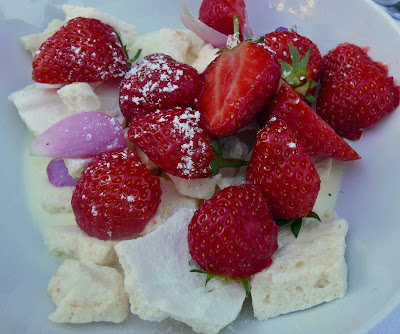 I've often heard chefs say they are nothing without the producers but the restaurants and chefs have a major role to play in getting the best from the produce and that certainly happened last night with Ali’s Kitchen, Electric Fishbar, The Farmgate, Fenn’s Quay, The Imperial Hotel, Isaac’s Restaurant, Jacob’s on the Mall, Jacque’s Restaurant, L’Atitude 51, Nash 19 and the Rocketman all playing important roles. Cheers to the hard-working owners and staff.

* I’m glad too that Rebel Chilli were also involved as it was in their competition that I, having been caught out by the early booking rush, won the tickets that got me to the Mall. Thanks, folks! 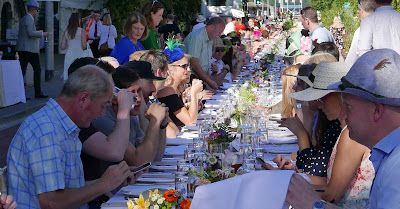