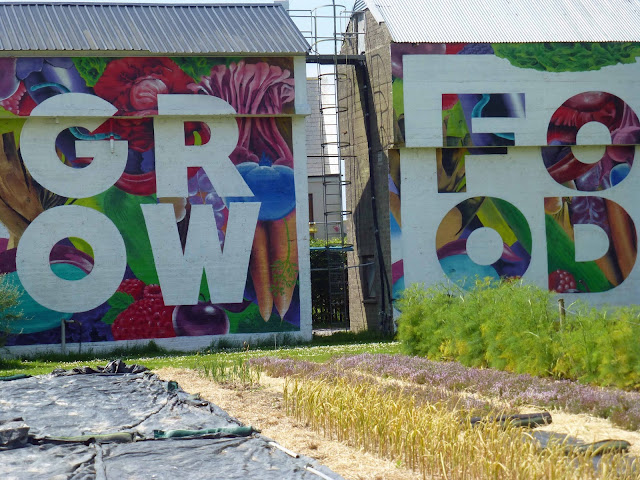 The cock crows. He always does when I arrive at Ballymaloe Cookery School. Good to be back!

The Food Truck Café in front of the Ballymaloe Cookery School in Shanagarry has just reopened for the season. So when a friend suggested a mid morning cup of coffee, there was no hesitation. Plan was to be there for just a short interlude but that stretched to a walk in the gardens and part of the farm, and, much later, a return to the Food Truck for a delicious lunch.

You may have coffee and cafe here from 10.30am until 5.00pm and they serve a light lunch between 12 noon and 3.30pm. First question? What to have with the morning coffee? There is a short list of temptation and the Tunisian Orange Cake was my pick and a good one it was. But it seems the winner on the day was the Gooseberry Compote served with their Jersey Cream Yogurt. Absolutely delicious.


Time on our hands then, time enough for a walk through the garden. There are some 70 varieties of herbs in the herb garden, laid out in a formal parterre edged with box hedges. Plenty of fresh herbs for Ballymaloe House and Cafe and the school.

The Herbaceous Border, planted in 1996, has thrived here, though not without a great deal of care and attention. Deep borders of fabulous perennials and grasses make it one of the very best of its type.
At the end of the border is the Shell House, with shell decoration by artist Blott Kerr-Wilson. We had been in these areas before - read more here. 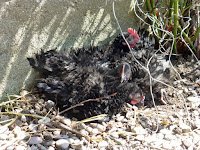 There is something new, always something new in Ballymaloe where their creatives just do what comes naturally. One striking feature, near the border, is the Garden Amphitheatre, a mini one. But it is capable of holding up to sixty people and is good for a cookery school lecture, even better for a wine tasting and lesson!


And not too far away, an Urban Garden was being constructed. The “entrance” sees you going out the back door of your home to see how your plants are coming along. Lots of good ideas packed into the small place, that includes a composting bin, a frame and a little greenhouse. Well worth a look for city-dwellers, even country dwellers whose gardens are on the small side.
I mentioned the Jersey cream earlier and soon we were passing those very ladies, at rest in the lush grass. Nearby were the free range pigs, at least the younger ones, a mix of Gloucester Old Spot, Tamworth and Saddleback. They were busy pushing one another near the water trough, looking to cool down on what was a very warm day. One even had his head buried in the wet mud nearby. Not too far away, some young hens gathered in the shade.

I hadn't seen the kitchen garden before so that was next on the walk. All neat and tidy, all organic, lots of vegetables and flowers too for dishes and drinks. And a scarecrow hiding in the high fox gloves! 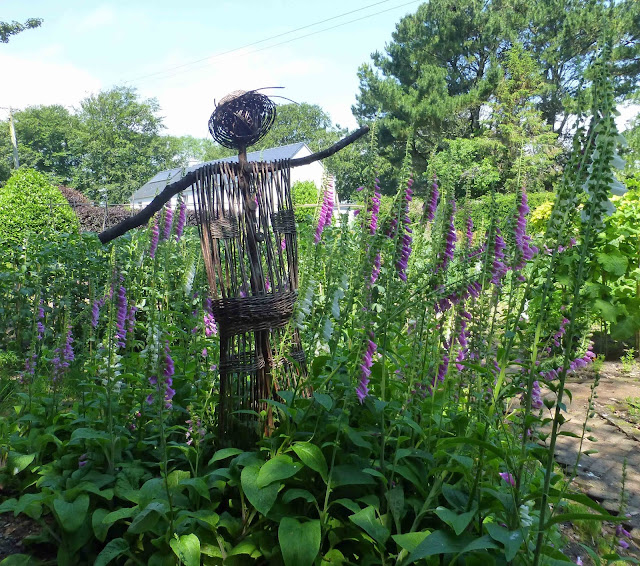 Oh I almost forgot. We also had a tour though the glasshouse. It was baking! It is a fertile place, again supplying the restaurant, the cafes (both here and at the house), and the school itself of course. Always something being harvested, something being set, everything here is grown from seed and a no-dig policy is implemented.

You may buy a selection of the produce at the shop. I was looking for some honey but none available, not until August. All those stories you hear about bees being weakened by pesticides and other -ides are not fiction. Far from it. But I did get a few things including a white yeast loaf, one of the very best I've ever tasted.

We were just about to go back to the nearby carpark when we realised it was lunchtime. So why travel further? We sat under the canopy opposite the Food Truck for the second time and studied the  light lunch menu. It included a Tart of the Day, a Taco and a Salad.

The Taco came with lamb, avocado, rocket, chipotle & horseradish mayo and crunchy veg, all for €7.50. Every single ingredient played a part here and the result was a slightly spicy and full of flavour meal.