Italian Wines from the Alps. From the west to the east

June 07, 2017
Italian Wines from the Alps
From the west to the east 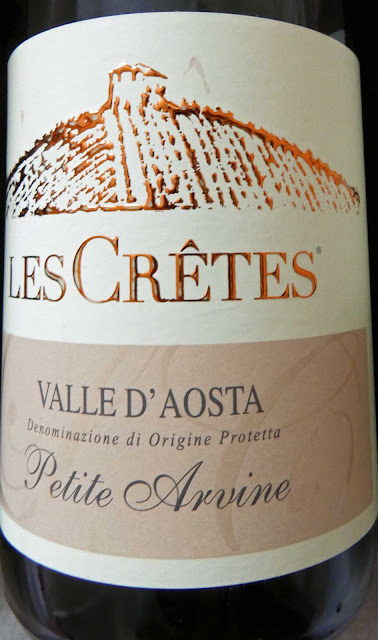 Petite Arvine, better known over the mountains in Switzerland (in the Valais), is “an indigenous variety” in the Valle D’Aosta, with “soaring aromatics and rich sweet fruit” according to Robert Parker, Wine Advocate.

Proprietor Constantino Charrère is the driving force in the region, “seeking out native grape varieties” for the wonderful wines of Les Crêtes, according to Le Caveau.

His work in this mountain area is the subject of an appreciation piece in The Modern History of Italian Wines and they list him as an influential figure right from the 1990s when Les Crêtes was founded.

As you may guess from the languages in the wine description, Valle D’Aosta grows a mix of of Italian, French and Swiss varieties. Surprisingly, the wine that brought Les Crêtes to international notice was their Cuvée Bois, a Chardonnay!

While wine has been produced here from at least Roman times, not much ever got out of Italy and Val D’Aosta has been designated “the forgotten corner” in Vino Italiano.

From the vineyard, one can see the high peaks of Mont Blanc, the Matterhorn, and Gran Paradiso. Well known ski resorts, including Courmayeur and Cervinia, dot the landscape. Here, in the valley, Petite Arvine makes “a light, flinty wine with hints of grapefruit and mandarin orange”.

Colour is a rather rich straw. The aromas are an intense melange of white fruit, honey and floral elements. It is very pleasing on the palate, rich white fruit flavours, citrus too, and a long drying, almost flinty finish. A gem from the ancient valley and Very Highly Recommended. 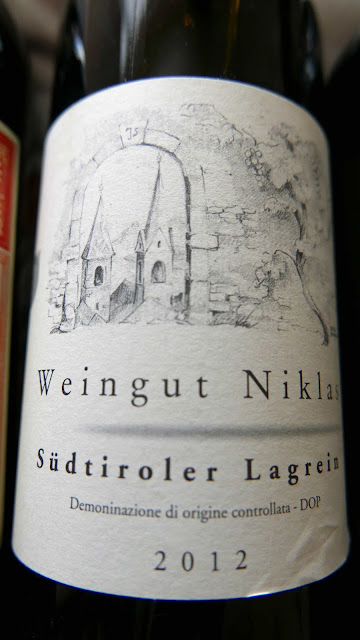 Grapes and Wine describes the Lagrein grape as an interesting mouth-filling variety and it is grown here in the north-east of Italy and over the border in Austria in the Tyrol. If you’re on a tourist coach crossing from Austria to Italy, the guide will take some pleasure in pointing out how neat and tidy the Austrian part of the Tyrol is by comparison with the Italian bit.

That bit, also known as the Alto Adige, became Italian in 1918 as part of the settlement after World War 1 and, as you can see by the wine bottle, it is still a mix of cultures and languages.

It is entirely located within the Alps and the craggy peaks of the Dolomites dominate in the east. Nowadays, thanks to the efforts north and south of the border, with no little help from the EU, this area is very prosperous.

This particular wine from Niklas Erhof is 100% Lagrein and has spent 10 months ageing in big oak barrels. It is perfect with game, beef and similar. We had it with new season lamb from Eoin O’Mahony butchers in the English Market and it was perfect.

It has a deep dark colour and you’ll more than likely note cherry and plum in the aromas. Dark fruit too on the velvety palate, a hint of spice also, not very tannic at all and indeed it is a surprisingly easy-drinking wine. Highly Recommended.

Fontanafredda. Important Player in Italian Wine
Two Amazing Whites from Italy.
Wines of Italy's Marche
In the Heart of Chianti
From the Islands

Puglia: Cool Wines From The Hot Heel Of Italy.