These Ladies Like to be Out and About. Bluebell Falls Goats Cheese 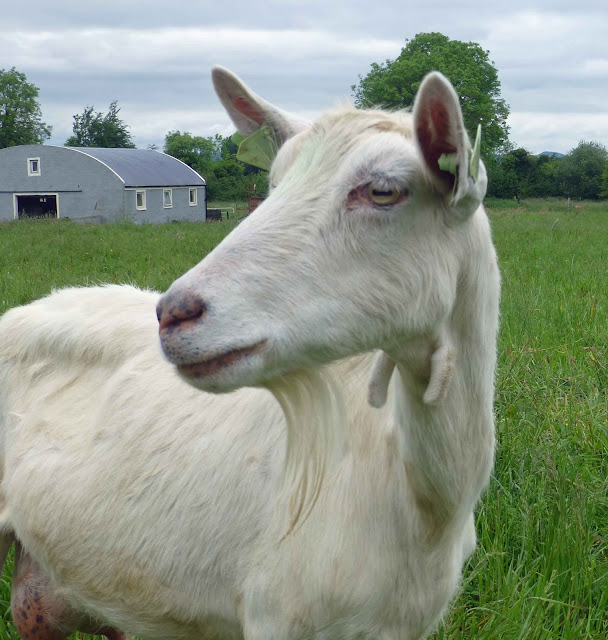 “Our goats are outside all the time. They have the use of the shed but seem to prefer the outdoors, even when it’s wet,” said Victor O’Sullivan to me when I visited his Bluebell Falls goats, all four hundred of them, last week. “It makes a definite difference to the cheese.”

Victor and his cheesemaker wife Breda have a mix of three breeds on the farm, just outside Newtownshandrum in North Cork “Why the mix?”, I asked. “They each have different characteristics and, with the three, we get a more balanced type of milk.”
Two of the breeds here are originally Swiss. The Saanen goats are a white or cream-coloured goat breed, named for the Saanen valley in Switzerland. The Toggenburg goat, is a breed of milk goat, named after the region in Switzerland where the breed originated, the Toggenburg valley in the Canton of St. Gallen. The British Alpine is a high-producer of quality goats' milk, and the breed can be found in many goat dairies.

They’ve had goats here since the middle of the last decade and the herd was up to the 400 mark by 2007, the milk being sold on to dairies. They took the big step in 2013 when they bought out Bluebell Falls (then in County Clare). Breda and Victor did cheesemaking courses under Eddie O'Neill at Moorepark (near Fermoy) and, very importantly, Paul Keane of the original Bluebell gave them a solid grounding in the business over a three month period. 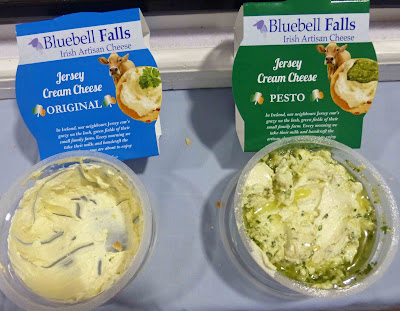 By 2014, they were retailing their own cheese. And, continuing “the same system as Bluebell”, have expanded each year since and are proud of their BRC accreditation, the global standard for food safety.

Their long oval packages have becoming well known to cheese lovers at markets, festivals and in the aisles of supermarket such as Dunnes and Tesco. Varieties such as the Original, the Honey and Garlic, the Cranberry, the Pepper, Mixed herbs and Garlic, and the Caramelised Onion and Caraway seeds, will be familiar to many of you. 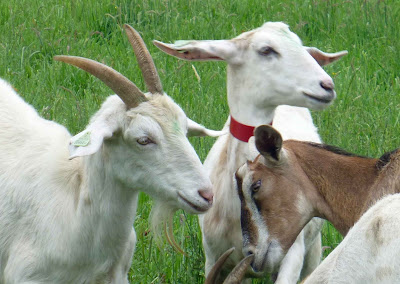 I met Victor at the recent Mallow Garden festival and he showed me the original and the cranberry in a newer different “tub” packaging. As tasty as ever but looking well.

And right along them were the new products, not made from goats milk but from cows. Not any cows either. He uses gorgeous creamy milk from a herd of pedigree Jersey cows on a farm in nearby Dromcollogher. And the two new products, the Jersey Cream Cheese Original and the Jersey Cream Pesto  are absolutely superb, well worth seeking out. 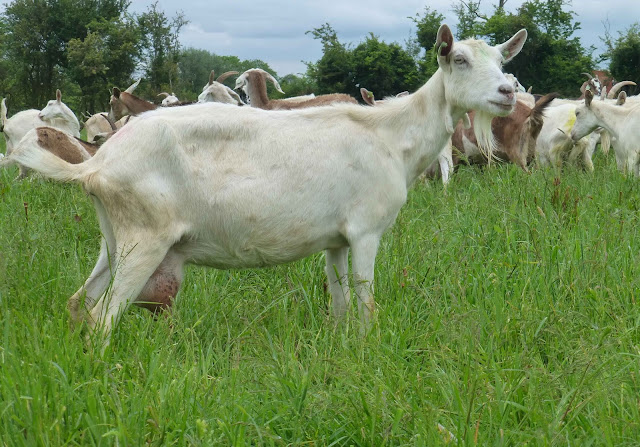 After that chat, it was time to get out and do a bit of farm work. Victor took us through the long grass where a big group from the herd were grazing and soon, with the promise of food, we were surrounded.

“How about giving a hand with the milking?” was the surprise question. Both of us put the hand up. Soon, he had a hold of one of the goats and CL was taking instructions, trying to concentrate and avoid the odd stray leg flying out. A second goat was more steady and the milk flowed, well flow may not be an exact description but she was getting the hang of it as I did later.
Luckily, Victor doesn't have to rely on city visitors to do the milking of the large herd. He has a mechanical set-up that milks them twice daily. Then of course the cheese making starts.

And when it is made, you must sell it. And that too takes time. Last weekend, Victor was at both the Mallow Festival and at The Sheridan's Irish Food Festival in Co. Meath. This week, it is five days at Bloom in Dublin, not counting the coming and the going. Tough going really but he gets great satisfaction from making a top class product and getting it out to the public. He is rightly proud of Bluebell Falls cheese and we consumers are lucky to have him on our Irish doorstep. Bluebell Falls is another reason why I'm happy to buy local!
The multi-award winning soft cheese is supplied to top end  hotels, restaurants and food service. It is distributed by, among others, Pallas Foods, La Rousse Foods, and Plassey Foods. Also available in all major retailers and good health stores.
Bluebell Falls cheese Cork Dunnes Stores goats jersey cows Newtownshandrum Old Butter Road Food Trail Tesco