I must say I really enjoyed the variety around the room at the 14th Cork Wine Fair, mounted by O'Donovan Off Licences, in the Clarion last weekend. There were more than a few excellent wines, as you might expect. No shortage of good craft beer and some delightful Irish spirits. Not to mention the local food stalls.

Traffic problems delayed some exhibitors and pundits but Mary Pawle, all the way from Kenmare, was one of the first to set up and my first visit. And her first offering was the biodynamic Dominio e Punctum Viognier 2015. Well balanced, great acidity and she suggests trying it with Asian Cuisine. Should have had toddled over to the Green Saffron stall!

Grüner Veltliner is a favourite of mine and Mary has a good one in the Diwald Grossriedenthaler 2015, dry and rich, with great length.

Time then to touch base with Padraig from Carrigaline Cheese, one of the Cork cheesemakers featured in the Oxford University Press Companion to Cheese, due to be published this Thursday.

Avril of Rosscarberry Recipes had her problems with the traffic but she arrived with lots of samples, including a new one by son Maurice who has been working on an unsmoked Angus Biltong, a delicious product with lovely texture and flavour. Early days yet but this could be another winner from the Rosscarberry farm.

Then I got side-tracked by some spirits, including Kalak the Celtic queen of winter. If people tell you that Vodka has no character, then give them a drop of Kalak. “We are very proud of this,” said Damien on the Tindal stand. “Enjoy it in a whiskey glass with a lump of ice. It is made from a single ingredient (malted barley) in a single distillery (West Cork) and only one of six vodkas in the world to be so made and recognised.” It is being sold in all the best places - the Germans love it and is going down well in the US.

Tindal’s were also tasting the Blackwater No 5 Gin. But my eyes were on their Juniper Cask Gin. I remember seeing those small juniper casks before they were filled but had never tasted the result. Damien fixed that. As many of you know by now it is a delight, amazing aromas and flavours.

There were some very enthusiastic people behind the stands. Jamie Winters of Irish Distiller was one and he treated me to a Jameson masterclass that included Blender’s Dog, Cooper’s Croze ad Distiller’s Safe. Each is made by a senior person in Midleton and each has the fingerprint on the bottles. Indeed, I’m told there’s quite keen competition between the three.

My first sip came from the Distiller’s Safe by Head Distiller Brian Nation. His aim was to show the character of the distillate. Despite the wood that follows, the pot still has the first say and it certainly does here in a light and zesty, gentle sophisticated whiskey.

Head Cooper Ger Buckley was on the darker side, revealing the flavour of the wood so skilfully crafted. Not just the flavour. There is more colour here too and a great mix of fruit, spice and oak with a long and pleasant finish.

That left it up to Head Blender Billy Leighton to bring it all together, the spirit, the oak and time. And he surely got the balance spot-on. Superbly balanced, sweetness and spice. Time and patience pays off for Billy. It is rich and round, the gorgeous fruit slow to fade in the final.

Major enthusiasm too at the Vineyard stand where we got stuck into the Malbecs! It was Argentina all the way and first up was the Pascual Toso 2014, a “sincere” and satisfactory example. But that was soon eclipsed by the Reserva 2014, super ripe with lots of complexity, very very good indeed.

Next thing we knew, our man vanished and returned quickly with another Malbec, this the Luigi Bosca Signature Malbec Reserva 2012. Like all the previous Malbecs this had a lighter colour than you’d normally find in Cahors. It was smooth and silky and with a great finish. “Magic!” according to our man. Magic Malbec indeed. This had come from the Barry & Fitzwilliam display where we’d earlier been sipping beers by Bo Bristle and Mountain Man.

He went missing again and was back in a flash with a sample of the amazing Zenato Ripasso (from the Tindal stand). I’m a Ripasso fan and have tasted quite a few but this Zenato Ripassa della Valpolicella Superiore 2012 is silky smooth, with amazing concentration and a long long finish. “Dangerously easy to drink,” said Damien when we returned to the Tindal stand. Damien is a huge fan of the wine and the man behind it.

And he had a suggestion for the Christmas dinner: the Zenato Valpolicella Superiore 2014, full of character and flavour and easily able to stand up to most the variations on the Christmas table. And we finished here with a sip of the Cotes du Rhône Les Deux Cols “Cuvée d’Alize” made by Simon Tyrrell. A blend of Grenache, Syrah and Cinsault, it was made for easy drinking and, with its rich fruit aromas and flavours, it certainly hits the mark.

And we just had to try the Beefsteak Meaty Malbec 2015 at the United Wines stand. Well we were under orders! This vibrant Malbec, spicy and juicy, rich from the oak, is ideal - you’ve guessed it - for juicy steaks. And believe it or not you can join the Beefsteak club  online!

Pat, well known to patrons of O’Donovan’s in Mayfield, is a big red wine man and he showed us two of his favourites. First up was the Famila Castano ‘Hecula’ Monastrell 2014, a Gold Star winner (under €15.00) at the Irish Wine Show. “Deliciously ripe and opulent, a steal” said the judges. 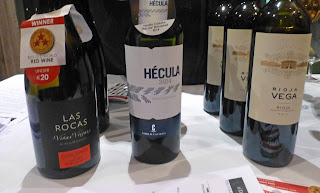 And I was very impressed with the next one: San Alejandro ‘Las Rocas’ Vinas Viejas 2013 from Calatayud. This won the Gold Star for reds priced under €20.00. And speaking of this old vine wine, the judges said: “..blackberry and mocha fruits with a side order of toast!”.

We finished where we started, back with Mary Pawle. We enjoyed the Stellar Running Duck Cabernet Sauvignon from South Africa and a young unoaked Rioja Osoti 2015. Osoti by the way means pigeon in Basque so maybe that’s a matching hint. And she also had a young Côtes du Rhone, the Contrefort du Delta 2014, very pleasing aromas and palate, soft and smooth, and described as “a good all rounder”.

All three were very good but my favourite of her reds was the Jean Bousquet Malbec 2015 with its intense aromas and flavours, soft and supple and with excellent length. Malbec again! Looks like it was the number one grape at the Fair, a very enjoyable few hours indeed.