No shortage of craic in the Franciscan Well pub on the North Mall last week when the local brewer officially launched their new can range in Cork. Three of their favourites, all tried and tested, are available in the new format: Friar Weisse, Chieftain Pale Ale and Ireland’s number one* craft beer Franciscan Well Rebel Red.

The announcement marks the first time Franciscan Well, which is brewed in Cork, has canned any of its beers and also the first time that Friar Weisse or Chieftain IPA will be available for purchase in off-licenses.

Founder of Franciscan Well, Shane Long (right): "The decision to move to a canned format reflects the growing trend internationally, whereby more and more craft beers are sold in 330ml can format. This is something that has been prevalent in the U.S. and has proven extremely popular. We are confident this will be the case as we roll out craft in a can for beer-lovers here in Ireland, making our award-winning range of beers even more accessible and readily available.” The new cans also chill quickly and are recyclable. 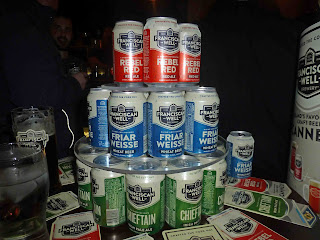 All brewing and canning will take place at Franciscan Well’s new brewery in Cork City. The brewery opened last year, allowing for operational growth and further expansion for Ireland’s leading craft beer brand, while staying true to Franciscan Well’s proud history and identity as one of Ireland and Cork’s favourite craft beers. The nearby North Mall brew-pub and home of Franciscan Well will be used an innovation centre, while remaining a popular destination for tourists and locals alike.

There was a pre-Christmas feel to the bar as we walked in to be welcomed with a choice of cans, of course. Must admit we both picked the Chieftain, a favourite here since it was launched. And later, I switched to draught and again couldn't resist that Chieftain! Next time, though I renewed acquaintance with the wheat beer, Friar Weisse, with is distinctive colour, aroma and flavour. The Friar (left) was one of my early Well favourites and, after the other night, it is going back on my short list.

It wasn't just beer on the night. The place was packed and there was music galore and no shortage of pizza either. Pompeii Pizza have a permanent place here and I saw why when I ordered one of their offerings, with  Chorizo and Mushroom toppings (€11.00). Enjoyed every little bit.

Check out the pizza, the music (including trad sessions), the tours and tastings on the website here. The new cans also chill quickly and are recyclable. And keep up to date on their Facebook place.