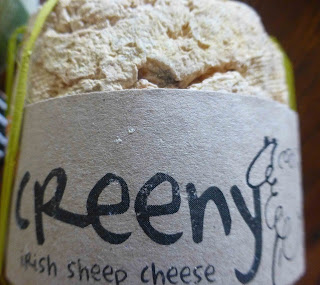 I bought this cheese at the Donegal Food Festival from the cheesemaker herself Silke Cropp of Corleggy Cheese in County Cavan. She told me it was six months old and made from raw sheep’s milk. It is rare enough as it is made only for four months each year.

At two months this is a mild cheese but as it matures (up to 12 months) it becomes a very sharp cheese indeed. I sampled a wee bit of the six month old cylinder and thought it was amazing, not a million miles away from a Pecorino, with a distinctive piquant pepperiness. It is indeed, salty, sharp and funky (as the Americans say).

It also has a distinctive rind but one that you may eat as Silke emphasised that it is formed naturally in the brine. “Creeny is always very slightly salty, the reason is that the sheep graze the grass to the very earth, full of salts and minerals from all the rich rain.”

Sheep milk is the richest milk of the three main milks and high butter fat and protein content makes for the rich luxurious taste. Like goat milk, sheep milk products are suitable for people with cow’s milk allergies.

It is my Taste of the Week. Use it as you would a Pecorino. It is suitable for grating and cooking and good for fondues, omelettes, sauces, salads, soups, pastas and pizzas and for sprinkling over savoury dishes. Go on, give it a try.