November 24, 2016
With Cork Cheese Week on (big weekend coming up at Cork Airport Hotel), I thought you might like to read this 2016 post on Cashel Blue, one of the cheeses featuring this week.

When you listen to Sarah Grubb speak about cheese and particularly about the cheeses that her family produces, including the famous Cashel Blue, you hear passion (and the occasional hearty laugh). But listen carefully and you realise that the passion is built on attention to details, little and large, and on hard work, on experience of course and also on a love for the locality, their terroir, the green fields of Beechmount Farm where their “new” dairy (2010) is located.

If the planners had their way, the building would have been on an industrial estate. But the Grubbs (including founders Jane and Louis, Sarah’s parents) were convinced that the dairy should be on the farm, in the place where the cheese had been made since 1984 and in the very area where their own workers came from. And, with help from friends and neighbours, that is what happened.

Cashel Blue is featured in the new Oxford Companion to Cheese. The book tells us that Cashel Blue has an ivory interior when young, which gradually deepens to a warm buttery yellow as it matures. Its thin, uneven streaks of blue give it a marbled appearance. Beneath the tinfoil wrapping is an edible, sticky, blue-gray rind with some white mold, which is intrinsic to the cheese, contributing to the breakdown of the curd and adding flavor and complexity. The book is published in America, hence the gray and flavor etc.

“The French,” Sarah said, “call sheep's milk liquid gold”. "Perhaps because it is precious - they produce so very little per ewe - and because too it is nice to work with. But you have to have patience with it. The milk contains more solids than cow's milk and so the cheese takes longer to develop.”

Goat's milk, she told us, is closer to buffalo than sheep (which is creamier). And, Sarah (who like husband Sergio, another key player at Beechmount) has a wine background, emphasized that sheep’s milk is a product of its terroir. “It varies from place to place. Fascinating!” And another thing, sheep’s milk is easier to digest.
She showed us the display of wheels. “Our cheeses are not particularly large - Stilton is much larger.” The smaller size is down to practical reasons. In a small operation, smaller wheels are easier to handle and quite often it is women doing the handling. The big wheels have one advantage though: “The larger the cheese, the longer it will last.”

“One sunny summer’s day my daughter Sarah and I were watching my husband, Louis, herd his cows in from pasture. What a deliciously rich and creamy milk they gave! I started to experiment. Eventually, in 1984, I created Cashel Blue, a cheese I believe truly represents the outstanding quality of Tipperary milk. I hope you will agree.”

This is Jane Grubb telling how Cashel Blue cheese came into being and we do agree, as do thousands of customers worldwide, from the US to Australia. “All areas of the market are supplied," Sarah told me they don't put all their eggs into the one basket! This is a deliberate decision, as they want everyone to try their cheese, not just those that shop in elite outlets.

I should of course say cheeses as Cashel Blue has been joined by other products, most notably Crozier Blue, developed in 1993 from sheep’s milk.
But back to Jane and those early days. She had decided to make cheese but didn’t know how. So she got herself a library book. Even that wasn't available locally and had to be obtained via the inter-library route. That book, lots of experiments and then the acquisition of a small vat, led to the famous Cashel Blue.

Over twenty years later, the new dairy was established near the original farmhouse (which had become almost overwhelmed by the success) and opened right in “one of the best fields” and locally became known as Louis’ shed. Louis is Jane’s husband and the entire family were glad to get their home back. 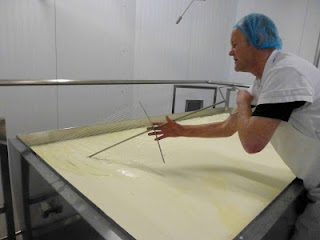 The early cheesemakers too needed encouragement as they tried to find their way. And that encouragement came in the shape of an early prize (up in Clones in County Monaghan)  and soon they were on the right path, choosing to make the blue rather than what many others were making.

The The Oxford Companion to Cheese is due to be published on December 1st. The 1084 page book, edited by Dr Catherine Donnelly, is the first major reference work dedicated to cheese and contains 855 A-Z entries in cheese history, culture, science and production.

The most comprehensive work on cheese available has drawn on an astonishing 325 authors (from 35 countries), from cheesemakers and cheese retailers to dairy scientists, microbiologosts, historians and anthropologists. It is a landmark encyclopedia, the most wide-ranging, comprehensive, and reliable reference work on cheese available, suitable for both novices and industry insiders alike. We'll have more on and from the impressive book in the coming weeks. 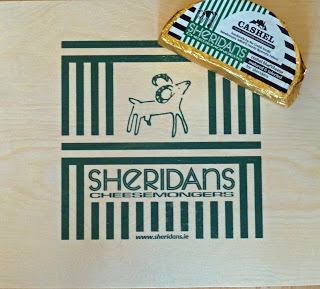