If you ever find yourself in Rioja searching for Tempranillo, don't be surprised if you hear familiar accents in the bodegas. I was there a few years ago and at each of the three wineries visited in one afternoon, I was greeted by someone who had learned their English in Ireland, two in Dublin and one in Cork.

Celebrating international Tempranillo Day? Here’s a duo of bottles to help, one from Rioja Alavese and one below from Alta. Alavese is the most northerly of the three Rioja sub regions; the others are Alta (to the South West) and Baja (to the South East).

This light bodied dry red is said to be a good example of the “modern style of Rioja”, a very pleasant one at that. It is quite a dark red and has pretty intense dark fruit aromas. And attractive fruit flavours also feature on the plum-y palate, barely a trace of tannins, just light and juicy, very approachable with a persistent finish. Highly Recommended. 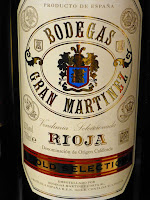 This is a medium red colour with cherries and raspberries in the aromas and on the palate too where you'll also notice smoothness and power, vanilla and spice, fine tannins and a decent finish. Delicious and a touch more serious than the Vinasperi and also Highly Recommended.

The fruit comes from 40 year old vines; it spends 12 months in French and US oak and they recommend pairing it with roast lamb or beef.

Tempranillo, indigenous to Spain and used in the great Rioja and Ribera del Duero wines, is planted in 500,000 acres of the world’s vineyards, making it the fourth most planted wine grape, and that would be enough to celebrate.


The periods are mimimum.

* 2017 Australia Day Tastings will be held in London on the 24 January at a brand new venue, B1 Bloomsbury Square, in Edinburgh on 26 January at The Balmoral Hotel and in Dublin on 30 January at the RHA Gallery.