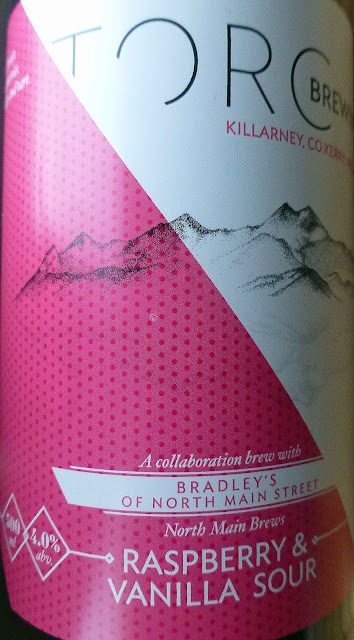 What is a sour beer? Don’t want to overcomplicate this and put you off. Think of a very dry cider or that gripping Basque wine Txakoli and you won't be a million miles away. Just be aware that in sours, as in ales and lagers, you’ll have quite a range. So you’ll have to try for yourself and this is a good one to start with.

I couldn't find an entry for sour in Slainte (The complete guide to Irish craft beer and cider).Perhaps they weren't any Irish sours when the book was published two years ago. Now there are quite a few. Yellow Belly and Eight Degrees had examples at the recent beer fest in the Cork City Hall. Perhaps the most high profile recent example for me was the Rodenbach at the Franciscan Well October Beer fest. By the way, people looking for cider at the festival, were offered this and there was a great reaction to it.

And this limited edition Torc is the newest Irish on the sour scene. While waiting for the revised edition of Slainte, I checked Wikipedia. Sour beer, they say, is beer which has an intentionally acidic, tart, or sour taste. The most common styles are Belgian lambics, gueuze and Flanders Red Ale, gose too.

This sour, by Killarney based Torc, is a collaboration with Bradley’s and is brewed with fresh raspberries and vanilla pods. The fruit, of course, is there to give a balance plus flavour.

The beer is tart, no doubt, yet not that mouth-puckering tart. It is refreshingly fruity, yet not overly so. I must admit I was well into the conversation with this well balanced cloudy beer before coming round to the idea that we could be friends! Well worth a try for yourself.