Rioja wines are voluptuous; they  are round and full and rich. They are not Audrey Hepburn; they are more Marilyn Monroe.*


Rioja in the north of Spain is one of the great red wine areas of the world. Like some of the other big red wine areas, there is a river running through it. The Ebro, the longest river in Spain with more than 200 tributaries, has given its name to the peninsula. But where has the name Rioja come from … Hard to say! Ana Fabiano in her 2012 book, The Wine Region of Rioja, says there are twenty two theories! But she narrows it down to two serious ones.

One of the pair does include the River Oja, Rio Oja, a tributary that joins the Ebro near Haro, in the mix. It is convenient for the modern reader to jump to that conclusion. But, as Ana points out, it is too simple. The origin is clouded in history and by versions in so many languages, including local, invader and Euskara (Basque). Much easier though to work your way through the wineries, even if many of them have Basque names!


Must admit I didn't know until recently that Rioja (the wine region) and La Rioja (the administrative region) are not exactly the same. Vines don't recognise where the border ends and so a Rioja vineyard can extend into Navarra or Álava. Rioja is divided into three sub regions: Alta, Alavesa and Baja.


Tempranillo is the main grape in Rioja. She (yes, it is a she) is so called because she ripens early and the Spanish word Temprano means early.


*The Wine Region of Rioja by Ana Fabiano. 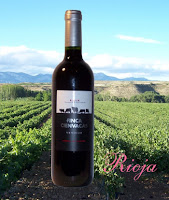 Decent fruit and a matching acidity combine to make this a quality, easy drinking wine. Colour is ruby and you have a bowl of ripe red fruit in the aromas. It is one hundred per cent Tempranillo and has been produced by a family undertaking to be “pleasant, healthy and for daily consumption,.... reflect in a straightforward manner the qualities of the environment and the benefits of the vintage”. All sounds honest to me and the wine is Recommended.


This bottle has a green label indicating less than one year in oak, less than one in bottle. This level of wine is often spoken of as being joven (young) but you may never see that word on the label. More than likely, you’ll see cosecha (harvest).


You’ll love the colour of this one, ruby with a shine. There are intense aromas of ripe red fruits. Fruit and spice combine in impressive attack, fine tannins too, superb body and balance and finish. This, made from younger grapes, has had a few months in oak. It is very good indeed for your basic cosecha (green sticker) and Highly Recommended. 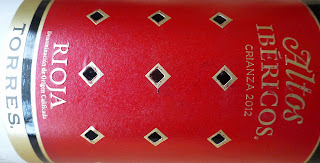 While Torres is synonymous with wine in Spain, it was only in 2005 that they first purchased land in Rioja. This wine is 100% Tempranillo and has spent 12 months in French and American oak. It bears the red crianza sticker. It was first produced in 2007. Torres don't rush and they now have just two wines from here, the second a Graciano. Watch this space methinks!
This deep cherry wine has aromas of ripe fruits, wood and spices. Quite a serious wine this monovarietal, bold and confident with fruit galore, elements of the oak too, a tannic grip, and a balancing acidity. Not of the easy drinking variety but well worth making the effort to get acquainted with this smooth customer. Very Highly Recommended.

In 2008 Tempranillo, Spain’s flagship variety, accounted for 80% of the red wine harvest in Rioja. You’ll also see it called Tinta del Pais, Tinta Roriz (Portugal), Tinta de Toro, and more. The blend here is Tempranillo (90%) and five per cent each of Graciano and Mazuelo (Carignan).

Colour is ruby (with a super sheen) and it has ripe fruit aromas. Vibrant wash of fresh fruits leads the soft attack, some sweet spice there too and other hints of its 18 months in oak. The finalé doesn't lack for length. May not make the top wines of Riscal - after all it is a newcomer (2007) to the stable - but it will sit nicely on my short list. Very Highly Recommended.

Zuazo Gaston Rioja Crianza 2012, 13.5%, €17.99
Stockists: Ardkeen Quality Food Store, Co. Waterford. Carpenters Off Licence Castleknock, Co. Dublin. Chill in Off Licence, Co. Dublin. JJ Gibneys, Co. Dublin. Matsons Wine Store Grange & Bandon, Co. Cork. The Wine Well, Co. Meath
This comes with dark fruits aromas, hints too of its 12 months in oak. Fruit and spice on the palate, fine tannins too and sufficient acidity, complex and elegant, all before a long pleasant finish (with a hint of fruit sweetness). Highly Recommended.
This is listed as one of the best crianzas in Ana Fabiano’s Rioja. Can't argue with that. Indeed, it is that listing that alerted me to Zuazo Gaston. The bottle is of an unusual colour, frosted dark green which, when full, looks totally black. Looks well on the outside, and what is inside tastes well when you get it out! 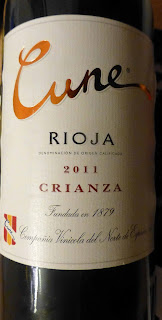 This bottle, from one of the longest established wineries in Rioja, has the bright red sticker that indicates its a Crianza with a minimum of 12 months in oak. It is drinking very well now. Uncomplicated, easy to drink and Highly Recommended. Penin, the leading Spanish wine guide, gave it 90 points.
Colour is a Cherry Red and there are very pleasant fruit aromas. Fruit flavours, fine tannins, plus the influence of its time in the oak and a matching acidity make this a very agreeable wine indeed and it has a decent finish too.
CUNE was founded in Haro 1879 as Compania Vinicola del Norte de Espana (CVNE). The transformed acronym, pronounced coo-nay, grew somewhere along the way! The sixth generation of the Madrazo family are now in charge.

Coto de Imaz Rioja Reserva 2010, 13.5%, €18.50 Karwig Wines
The bottle has the burgundy sticker indicating Reserva status. It is dark cherry in the glass with aromas of fruit (ripe, red) and spice. No shortage of power here, fruit, spice and wood wonderfully combining in a smooth show of Tempranillo at its best, power yes but in a velvet glove. It has spent 17 months in oak, well over the minimum twelve.

Founded in 1970, Bodegas El Coto is one of the “younger” Rioja producers and its wines are regarded as “wonderful Classic Riojas”. And indeed reverence is due here, excellent structure, well rounded and balanced and Very Highly Recommended.

This superb reserva is made mainly from Tempranillo vines planted in the 70s. The Graciano and Mazuelo varieties, whose presence in the blend does not exceed 10%, provide crispness and a lively colour. The fruit has been hand-picked and the wine has spent 26 months in American oak.

That colour is a dark cherry and the aromas are of concentrated ripe fruits, hints too of the oak and also balsamic notes.  The palate is superbly rounded, smooth and elegant, tannins are very soft and there is a long finish, A top drop for sure and Very Highly Recommended.

They recommend pairing it with ham, mild cheeses, casseroles which are not highly spiced, bean and pulse dishes, poultry, red meat, grills and roasts.

* At leading independents, including Bradley's and O'Driscoll's of Cork and also available on-trade at leading restaurants and bars.

Check out our mini-feature on leading Spanish winemaker Alvaro Palacios and how he is changing the balance in your Riojan red!
More here on Rioja whites