Taste of the Week. 15 Fields Cheese 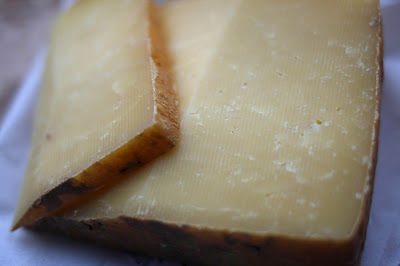 Our Taste of the Week is the 15 Fields mature cheddar cheese. It is a cooperative effort between Eamonn Lonergan of Knockanore Cheese and Sheridan’s. The name refers to the fifteen fields of Eamonn’s West Waterford farm. The cheese is produced from “great raw milk” in Knockanore and is then transferred to the maturing room in the Sheridan’s warehouse in Meath.

Many of you will have noticed at various tastings that it is usually the young cheddar that gets the popular nod ahead of its mature cousin. Generally the reason given is people don't particularly like the usually very dry texture of the mature. Sheridan’s seem to have got over that hurdle with 15 Fields (matured for 14 months).

It is their first venture as affineurs and, while it is early days yet, they “are really happy with how it is going”. I tasted it over the Christmas (having won a hamper in a Sheridan's online competition!) and it is terrific, a lovely Cheddar, mature but not dry, full of great flavour and our Taste of the Week.

Sheridan's recent book Guide to Cheese classes cheddar as a Pressed Uncooked Cheese and you’ll also see it classed as a Scalded Hard Cheese. The group is large and varied and includes Farmhouse Gouda, Cantal, Raclette, Pyrenees, Tomme de Savoie (and other Tommes) plus most of the English county cheeses such as Red Leicester, Wensleydale, Cheshire and Double Gloucester.

They are particularly good for use in cooked dishes, the stronger flavoured ones giving the best results. Don't overcook or apply strong heat or the cheese will become stringy and leathery. They are also ideal for light meals and snacks, especially picnics and packed lunches. Versatile!