Catch Your Fish at Fenn’s Quay

If in Cork, go catch your fish at Fenn’s Quay.

Once upon a time, Fenn’s Quay was actually that, a quay. As was nearby Cornmarket Street, as was Patrick Street (check the bend of the river!). Indeed, once upon a time, maybe in the 1970s, there was a proposal by a local businessman to concrete over the south channel of the River Lee and make a road of it. Glad to say that outrageous proposal - it got a lot of newspaper space - never off the ground.

Cork city centre still remains an island. And fish is everywhere, white, slippery, in the markets and stunningly fresh and tasty in many of the local restaurants. Kate Lawlor’s Fenn’s Quay restaurant is where we found some excellent dishes during a midweek lunch.


The fish platter, a regular feature, was an enticing option (€15.00). It was a perfect assemblage, a well judged mix of textures, flavours and colours, quality and quantity giving an elegant sufficiency on the black slate. In plain words: Fish croquettes, cured salmon, beer-battered hake, and smoked mackerel paté. Add in a perfect salad and you have a happy customer, singing a shanty on the way out the door. 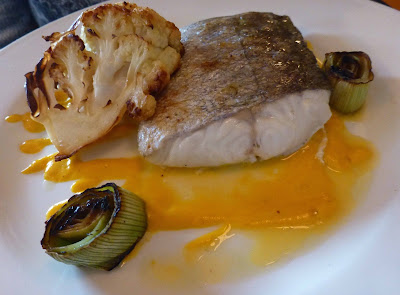 Fenn's Quay hadn't been too busy when I arrived - on the early side - but when I looked up after finishing that mega-platter - I noticed it was getting close to full. It is a popular spot, just off Patrick Street and conveniently close to the Courthouse area. No doubt briefs are studied (and discussed) here, after the menu is perused of course!

CL too had made an excellent catch: Baked Hake with roast cauliflower, leek, carrot and mash (choice of salad also), all for 16 euro. Hake has become an established favourite in local restaurants - just a decade ago it was seriously under-utilised here but a successful Bord Bia campaign, improved the siutuation. The piece in Fenn’s Quay was white, moist, impeccably cooked and deliciously delicate. Vegetables could have been a touch softer.


Now, before I go any further, I'd better make clear that Fenn’s Quay is not a fish restaurant. One of the highlights on the Specials Board was a Featherblade of Beef dish, another speciality here. Lots of choice, both at lunch and in the evening.
We had started with their French Onion Soup with Gubbeen Crouton (€4.50), a magical little bowl of the stuff. The soup and the Gubbeen were a match made in heaven but there was also a little dark magic added back in the kitchen, much more back-bone to this than you get in your regular French Onion soup. Highly recommended, especially on a winter’s day.

Indeed, day or night, winter or summer, fish or otherwise, Fenn’s Quay is very highly recommended indeed. But do watch out for those fish specials!

By the way, they will be open on the 13th and 20th of December (both Sundays), serving both brunch and early dinner.