Around the World without a Duck! The Edible Atlas by Mina Holland


The Edible Atlas by Mina Holland

Mina Holland doesn’t like duck! The author of the Edible Atlas worked her way through 39 of the world's main cuisines, including two regions of China, without cooking duck once! I had been checking the index for another reason but no sign of duck at all.

I did find out why though when we came to cook her A-not-quite-Cassoulet, from the Lyon area (Rhone-Alpes). This is so called because the normal duck is missing. “Expensive+greasy+cute=duck just isn't my favourite meat to cook with.”

I bought this book about a year ago and hadn't seen it since. A bit unusual, as we usually like to use the books we buy. But this was first up on a shelf and then got hidden by an increasing bunch of cook books. 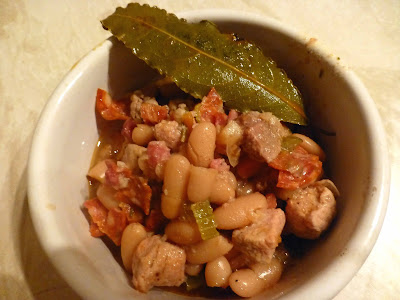 But, duck or no, we are making up for lost time and so substituted pork for the duck. That was combined with all the other cassoulet regulars - cannellini beans, bacon lardons, lots of garlic, bay leave too - in the fantastic flavoursome stew. The author loves this kind of dish: “This is the food I remember over Michelin-starred meals. It is usually delicious, very often gruesome and always real.”

She recommended washing it down with a bottle of local Syrah or Syrah/Grenache blend.
but I’m following a different wine river currently. I picked mine from Rioja, where the Ebro runs through, and the El Coto de Imaz Reserva (Karwig Wines) was chosen and did the matching job superbly.

Mina, editor of Guardian Cook, covers four regions in France in the book. The others are Provence, Loire Valley and Normandy. And it was in Normandy that we found our dessert: Apple Tart Normande, a dish “in which fruit, pastry and frangipane get jiggy”. Hard to resist that. 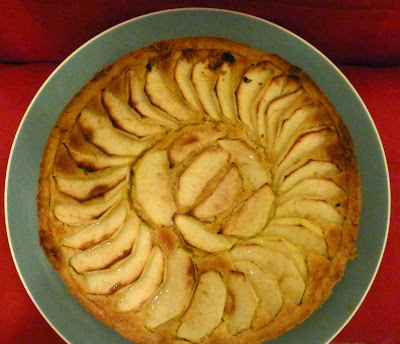 And the different parts do jel so well together, the fruit, the shortcrust pastry and the frangipane with the almonds and a shot of Longueville House Apple Brandy (well, we had that instead of the Calvados). A whole tart is a bit much for two but it lasts well in the fridge.

So, after that year lost on the shelf, the Edible Atlas is off to a great start in this house. “Fascinating, telling some fantastic stories about a broad range of cuisines … The food cries to be cooked,” said Yotam Ottolenghi.

We are looking forward to “visiting” Europe (no less than five regions in Italy alone), The Middle East for sugar and spice and all things nice, Asia (from India to Japan), Africa and the Melting Pots of the Americas (Louisiana among them, of course). Could be quite an delicious journey, even without the duck!