Long May Dede Reign In Baltimore

Long May Dede Reign In Baltimore

When I was growing up (in the middle of the last century), I was aware of three grain crops: barley, oats and wheat. I knew them well, from the time they broke ground to the time they were threshed (the workers enjoyed a bottle or two of the black stuff!).

Later on, much later on, I became aware of other grains (rye, spelt) and, last weekend in Baltimore, Dede introduced us to another one or at least to another variation: Firik, an ancient grain from his Turkey.

And there was much more from Ahmet Dede’s native country including mulberries, his spice mix, Turkish cold pressed olive oil. Indeed, he has some 50 different spices, oils, molasses, nuts, grains and more from Turkey.

The restaurant in the local Customs House elaborates:  “Our spiced based Turkish fusion cuisine is created by using raw and fresh ingredients from West Cork… An emphasis on beautiful local produce married with Chef Ahmet Dede’s Turkish heritage…”.

And then, to the premium inputs from Turkey and Ireland,  he and his team add amazing technical skills, precision and attention to detail.

We start our culinary trek, no cutlery required for this first step, with a couple of amazing snacks. One is based on a biscuit made from mushrooms, a toothsome squeeze of mature Coolea, then a sliver of onion, all crowned with a spicy crisp. The other was the dolma,  a top to bottom segment of poached onion stuffed with rice, topped with smoked yogurt and caviar, and decorated with chive flowers.

What a beginning! And it just got better. As we made our delightful way through the many courses, we said “that was the best” and repeated the phrase again when the next one came along.

But this next one was truly amazing, an illustration that this Irish-Turkish fusion was giving us the most amazing food. It was the Spiced Lobster Bisque, Brown Crab Manti and Caviar. The fish of course came from the waters around the nearby islands and the cape.

Around this point, he introduced us to his beautiful sourdough bread along with the Turkish olive oil and the Irish butter from Gloun Dairy.

Now time for another gem: Langoustine, radish, pea, smoked Crème Fraiche, and spiced consommé. And it just got better with the Cod, Chicken, Butter, Grapefruit, Lobster, and Fermented Chili Oil. The cod is not a rare fish on Irish menus but rarely do you get it so pristine and beautiful as this, singing on the plate. Of course it had a classy chorus to accompany it. 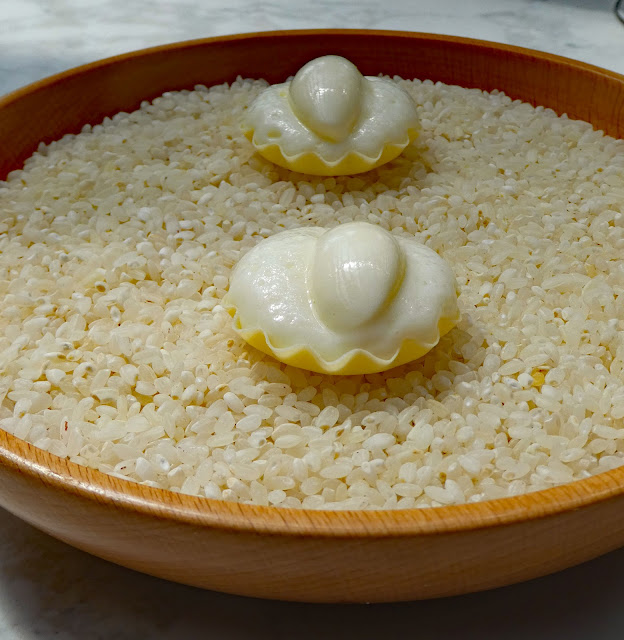 Course six was soon in front of us, the only meat of the day, a Wagyu and Dexter cross Aged Striploin, Ottoman Spiced Firik, Mint, Carrot, Kumquat and Isot. The meat, from Macroom, was excellent and yet it was that Firik that stole my taste buds, quite an amazing “risotto” with the grain looking like pearl barley but so much more flavoursome. In fairness, the grain and the meat together were quite the main course.

It was to be cheese and sweet all the way after that and so we switched from Stonewell Cider to Killahora Ice Wine, just as the Red Mulberry Vacherin (a soft cow’s cheese), pomegranate, wood sorrel, young meadowsweet, arrived on the table. It looked beautiful but, we were “ordered” to smash it with the spoon. And, having taken the photo of course, we did the vandal bit and then tucked in and enjoyed every large and little fragment.

Next a trio of small sweets were introduced: Hazelnut Bon Bon, Blood Orange & Cardamom along with the best Turkish Delight I’ve ever tasted.

And yet one more treat before we made a leisurely farewell. As with all the previous courses, our friendly and efficient servers (and there were quite a few) gave us the details and, on this occasion, the chef showed amazing precision as he made the most flawless quinnelles to top the Sütlaç ‘Rice Pudding’ Tartlet.

And that topped our memorable 10 course lunch at the Michelin Star restaurant. Thanks to Dede and Maria and to their lovely staff. Long may they reign in Baltimore.