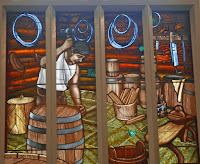 Back in 2019, I visited the beautiful Pearse Lyons distillery in Dublin’s Liberties. As you’ll see on the label, the distillery dedicates their spirits to the people and place that make it! They didn’t make that much of this one, just 4,000 bottles of which this one is #3377.

After a lovely informative tour, we got down to the pleasure of tasting a few as the afternoon sunlight spread through the gorgeous stained glass windows, each showing a scene from the process of making whiskey.

This Single Malt was our final tasting of the session. It was a new style of bottle for Pearse and was intended to be the type used from then on.

The standard within the bottle impressed and I thought it was exceptional and this latest tasting leaves that opinion unchanged. It is, as you may know, all their own malt, raised in first and second fill Bourbon casks.

They say: “It is the first five-year age statement Irish whiskey to appear from a new distillery in the whole of Ireland in more than 25 years. Presented in 4,000 individually numbered bottles, this limited release 5-Year-Old Single Malt was produced on two small-batch copper pot stills, and aged in bourbon casks.”

It is sweet, oaky, peppery. Still young, yet full of promise, all very encouraging indeed. This was actually the bottle that I bought before I left! Only getting around to it three years later but still loving its fruit of the grain, still giving it a big thumbs up.

Carefully selected from rare stocks of aged Irish Whiskey, the Fercullen 10-year-old Single Grain Irish Whiskey has been aged exclusively in American white oak (ex Bourbon barrels) for over a decade before being re-casked to mature in fresh bourbon barrels.

Produced by Powerscourt Distillery, it comes in a lovely gold colour. Vanilla, honey and spice in the sweet aromas (all through really), rounded and not overly intense. Beautifully smooth and balanced on the palate, sweet, crisp grain with complex combinations of oak and fruit. While flavours of vanilla and orchard fruits lead the palate, there are subtle combinations all the way, nothing jars at all, no extremes, easy sipping (no need for water) to a long and lovely finale with a sweet vanilla oak touch.

I tasted this first three years ago with the then Powerscourt master distiller Noel Sweeney. We actually started with it. Noel was not at all surprised at its success, “a star performer”, and he thinks that this particular category is generally “under-rated”. Again, I bought this bottle on that visit and only got around to it now.

The Fercullen 10 year old is based on old stock made by Sweeney while at Cooley, where he began his 30 plus year whiskey career and stayed on after founder John Teeling sold to Beam in 2011.

Noel is a globally recognised expert who has been credited for the release of many international award-winning whiskeys and was inducted into Whisky Magazine’s celebrated ‘Hall of Fame’ in 2017.

Celtic Whiskey still have some of the Pearse at €90.00.

And they have the Fercullen listed at €57.50