A Quart of Ale± #109. On the craft journey with Whitefield, Rascals, Porterhouse, Lough Gill and Kinnegar

On the craft journey with Whitefield, Rascals, Porterhouse and Lough Gill 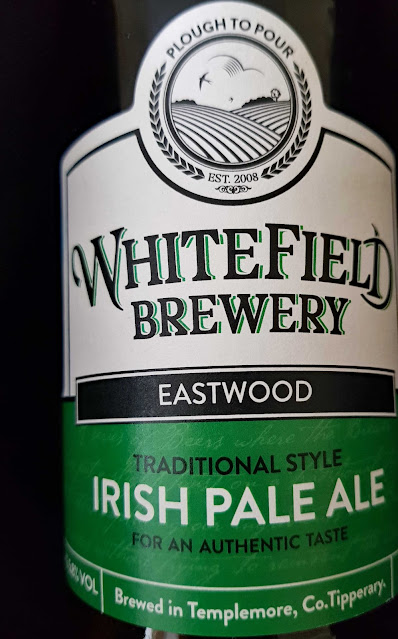 Whitefield’s Irish Pale Ale is more red than pale when poured from their usual bottle. It has a pillowy off-white head that hangs about for a while. The aromas are malt driven. It is immediately refreshing on the palate, nicely balanced between the Tipperary barley (from Tim Connolly’s farm) and Slovenia hops (from Blaz Bosnar’s farm).

Whitefield say:  “This pale ale brings out the best of our philosophy. Tradition, terroir and time.” Add in the long and creamy finish and I’m tasting a really beautiful beer, full of character. A big thumbs up for this one from Tipp.

I was reading on their website, looking for a bit of background on this beer (including why it is named Eastwood, and found there is quite a story behind the gear at this brewery: The brewery was commissioned by Paulaner in 1996 for a brewpub in Singapore. The Asian crisis meant the brewery had a very short life of less than six months.

It was then purchased by the Kiley brothers from Kinsale.  So, the brewery undertook it’s second journey all the way to Ireland and was commissioned in a beautiful building in Kinsale town in 2002.

No reflection on the owners however as the Irish market was difficult nut to crack in the hay-days of the Celtic tiger and it was idle again by 2004. The brewery lay dormant for the next 4 years after 2 false starts.

Whitefield (then White Gypsy) purchased the brewery in August 2008 just as another crisis loomed! It all worked out well this time, according to Whitefield: "They say it’s a long way to Tipperary, well it is when you start in Germany go to Singapore then on to Kinsale and end up in Templemore. She has a loving home now and fingers crossed she’ll see her retirement here.” 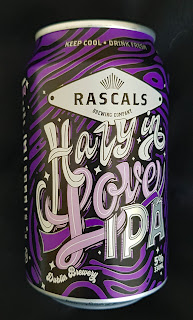 It’s a case (for me it’s a can) of love at first sip! Rascal’s are obviously very happy with this one and it is now part of their core range.

It is not that overly hazy as you can see streams of bubbles rising in the amber/orange colour. Aromas are tropical with Mango heading the posse. And all that exotic fruit, along with some citrus, shows up well on the juicy hoppy palate and there’s a smooth mouthfeel as well. No wonder they’re happy, as well as hoppy of course, in Inchicore. The bitterness in the beer is more or less middle ranking and prepares the palate for the next sip.

They say: This is a hazy IPA hopped with Citra, Mosaic and Ekuanot. Not only does it have all the flavour and aroma profile you’d expect from those world-class hops, but we’ve added wheat and oats to give a lovely hazy appearance and smooth mouthfeel. … Cloudy, juicy, hoppy, crushable: it’s a beer that delivers!

Quite happy to agree with that!

By the way, because you may well ask, the tropical flavours found in hoppy beer can include Passion Fruit, Pineapple, Mango, Lychee, Kiwi, Jackfruit, and Papaya.

And another by the way. It may well be worth your while visiting Rascal’s Inchicore (Dublin) headquarters. “We’ve a world class pizza restaurant with the freshest beer pouring on tap.” You can also check out their off-licence, do the brewery tour and enjoy the taproom of course. Details at www.rascalsbrewing.com 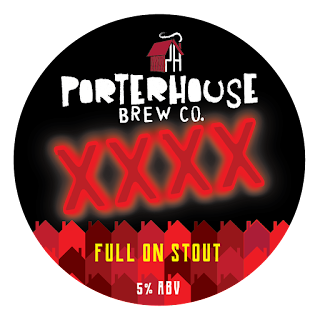 Glossy black colour and a foamy tan head are what you see on this Porterhouse stout. But what do you get? Exactly what they say - a full-on dry crisp flavourful stout, introduced by a classic aroma. Hops have their say in the aromatics but it is the malts that drive the flavour on the palate before the hops, with a fruity citrus streak, take over again in the the dry and bitter finish

They say: XXXX refers to the alcohol level and the depth of flavour in this stout. Our kettle hops drum up a fabulous aroma, flaked barley delivering big time on texture and the darkly roasted grain building a flavour as solid as a rock. Not for the faint hearted. Can you handle it?

They certainly seem to have struck an excellent balance between the fruit and bitterness of the hops and the darker roasted qualities of the malts. Having spent a few hours the previous day drinking one of the main stream stouts, this Porterhouse was different class. 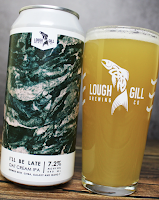 Craft brewed in Lough Gill, an independent brewery in Sligo, this Oat Cream IPA, has a mid-orange colour, a soft foamy head and cloudy haze. Aromas are fruity (citrus and exotic). The palate comes on strong and complex, all those exotic fruit while the oats and lactose help give it a creamy feel.

They say: Dry Hopped with 18g/L of Citra, Galaxy & Idaho 7, this IPA is an explosion of Citrus, Grapefruit, Passionfruit and Apricot which bring out bright tropical fruit and peach aromas followed by a little dankness.