A Quart of Ale± #111 with Cotton Ball, Lough Gill and Athletic Brewing 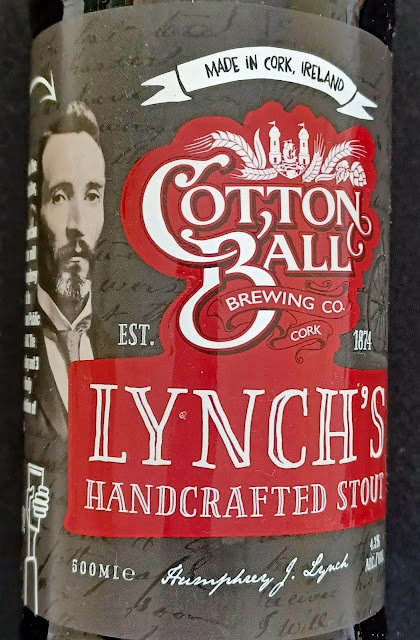 On the craft journey with Cotton Ball, Lough Gill and Athletic Brewing

The Lynch’s Stout from the Cotton Ball brewery is an excellent one, flavour, smoothness and a long dry finish the striking characteristics.

You get the hints of your old toffee bar in the aromas, coffee there also, and on the palate; the flavours last, still a pleasure well after the swallow. The beer is available on draught at the bar and also in bottle.

Humphrey Lynch, an American Civil War veteran and a cotton mill foreman, returned to his native Cork in 1874 to set up his own public house which he called the Cotton Ball. It is still here today and the current generation are brewing a selection of craft beers named after their great great grandfather who left the West Cork countryside as a teenager. The brewery, under the Mayfield pub, was founded in 2013.

A day or two after finishing the bottles in bought in O'Donovan's, I headed up to the nearby Cotton Ball for a quart± from the tap. Excellent stout and excellent company.

Hand crafted from five malts and traditional flaked barley, moderately bittered and late hopped with US and New Zealand hops, they say: “This stout is as dark as our great grandfather Humphrey’s black humour and has a warm and mature flavour. With a phenomenal marriage of coffee roast, caramel lush, balanced by a clean bitterness exploding into a tangerine, mandarin aromatic delivery.`’

They reckon it’s a great accompaniment for hearty meat dishes, stews and steaks. But, with a shameless piece of name dropping, they say that the ultimate food pairing is "our Famous Cousins’ Clonakilty Black pudding"! 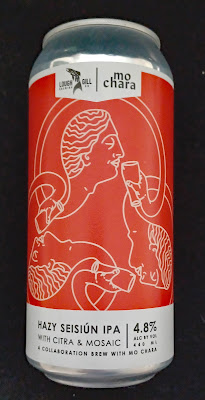 This hazy IPA is a collaboration between Lough Gill and their friends at Mo Chara.

It is pale in colour, almost lemon, hazy for sure with a white head that soon sinks down to leave a circular trace. Citra and Mosaic are the hops so I’m expecting Citrus and Mango and that’s what I get both in the aromas and, after a little shyness, on the palate. It’s not a big tiger of a beer, more like a pussycat, gentle and compatible over a session I’d say.

Lough Gill indicate that the Norwegian Yeast called Kveik has been used here and that does help bring out fruiter notes and that is the case here with exotic notes including Mango, Pineapple, Papaya, Tangerine and Passion Fruit. Quite a pleasant posse of flavours indeed.

Dundalk based Mo Chara are craft beer supporters, big time. “With 24 taps of craft beer, wines & cocktails, we have one of the biggest selections in Ireland on tap. Ten of our taps are rotational which means we change to a new beer after every keg so you can try something new every time you call in for just the one.”

Dundalk’s First Craft Beer Taphouse are not just about the drink. Here you may also get coffee, sambas and pizzas, And lots of craic by the look of it! 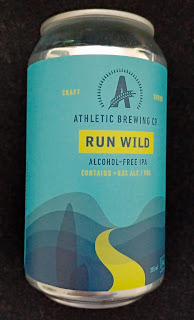 The American producers of this beer tell us Run Wild is the ultimate sessionable IPA for craft beer lovers. “Brewed with a blend of five Northwest hops, it has an approachable bitterness to balance the specialty malt body. Always refreshing and only 70 calories.”

Nice slightly hazy golden colour on this IPA with a decent white head that’s not for hanging around. Aromas, citrus and hoppy, are modest. And it looked as if the palate would continue that trend. But I gave it a good swirl around and that approachable (modest) bitterness made its appearance. Refreshing enough but not deeply so.

Still I’d be happy enough to agree with their assertion that "This isn’t your traditional watery, tasteless alcohol-free beer.” It is certainly more than that and better than many on the market. It could certainly do the job for a night if you are driving. And I’d also see it useful to alternate it with an alcoholic beer over a session where you want to exercise restraint. No major sacrifice! And I could say much the same about the Golden Ale, though with less enthusiasm.

When I picked it up first, I thought it was Irish but Athletic Beer are US producers with an office address in Dublin. And the US connection is written on the can which comes in a slightly different size to the usual European one. By the way, why do most non alcoholic beers, with the exception of the German ones (probably the best of the style), come in smaller sizes?

They say: Whether you’re looking to cut out alcohol for life or just for a night, you shouldn’t have to sacrifice your ability to be healthy, active and at your best, to enjoy great beer.

Run Wild is the ultimate sessionable IPA for craft beer lovers. Brewed with a blend of five Northwest hops, it has an approachable bitterness to balance the specialty malt body. Always refreshing and only 70 calories. 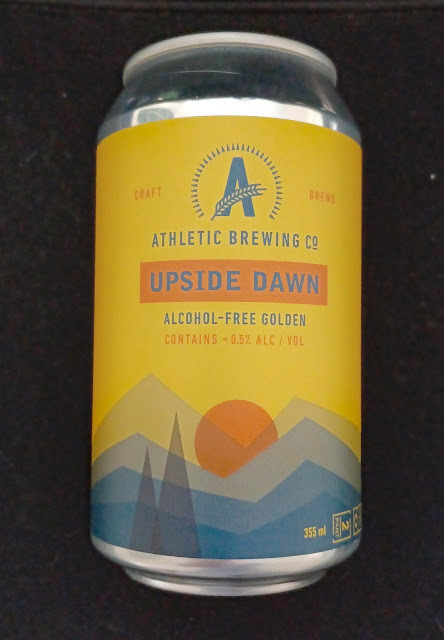 Made in a “classic craft Golden Ale style", this is the other Athletic Brewing alcohol free beer that I recently picked up in Bradleys.  Again it is a pale orange colour with haze and a white head that doesn’t hang about. Aromas are more floral than fruity (citrus). On the palate it is not that dissimilar to the IPA but is that bit milder, easier-drinking.