A Quart of Ale± #108. On the craft journey with Whitefield, Whiplash, Porterhouse, O Brother

On the craft journey with Whitefield, Whiplash, Porterhouse, O Brother

Colour is a hazy mid-orange colour with a soft slow-sinking wheat head. Nose is fruity (citrus), floral notes too and a background touch of pine. It is certainly very drinkable, more grapefruit on the fruity palate but little enough bitterness evident until the lip-smacking finalé. Indeed, there is a slight sweetness in the juicy mouth.

This beer goes down well with Whiplash, and their customers: “A relatively new beer in the history of Whiplash, but one that's earned its spot as a team favourite. Prisoner of Love is an all Cascade Pale Ale that we just have to slip into the schedule every year now. These hops are bright & lemony with complimentary floral and herbal notes and that translates beautifully in this beer.” 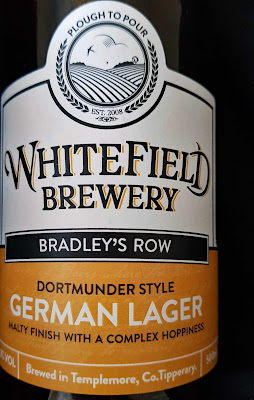 Lots of crafty beer out there for the hop addicts but this one is for the malt heads.

The Dortmunder style is a pale lager but this has a bit more colour, closer to a dull amber. The bubbled head is soft and sticks around a bit. As well as a “malty finish” it also has a malty start which comes through on the aromas. And indeed it is malt led all through.

The Whitefield label tells us their Dortmunder style German lager has a malty finish with a complex hoppiness. “Brewed with 100% German Brake Pilsner Malt, a variety of barley grown throughout the 80s in Germany and became synonymous with the German style lagers we all grew to love. Brewed with water from our own well, master barley, hops and yeast.”

The Beer Bible says the Dortmunder is “not a style  of enormous character” and that “the style’s future looks uncertain”.

There are, for some reason, a few Welsh words on the label and Google translates as “there is a black sheep in every flock”.

As you know the Templemore brewery was previously called White Gypsy. The rebranding also led to changes in their beer names, now being called after local landmarks. But their website doesn’t always keep up with their new beers so I can’t tell you what the ‘Bradley’s Row” refers to. I think though you can take it it refers to a local landmark rather than to the famous Bradley’s off licence, a beer landmark in Cork’s North Main Street.

Don’t think I’d be going out of my way to find a Dortmunder style. But I did appreciate this one and, so if you are a malt person rather than a hop person, then you will certainly like it. 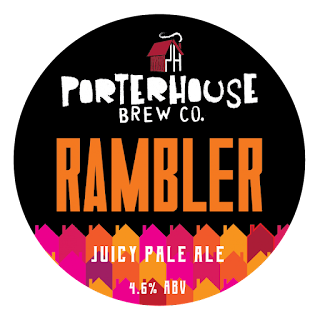 The Rambler has a light orange colour (and haze) in the glass, with a white head. “One for the juice heads,” say Porterhouse, based on the three hops used at whirlpool and hop. Well, it is juicy, moderately hoppy also, with a good dry finish.

The three hops added to the basic Magnum are: El Dorado (Apricot, tropical, citrus), Enigma (Grape, Berry, Melon), Eukanot (Mandarin, Melon, Mango). Their individual characteristics are in the brackets so you can see how they contribute to the result with a mild enough citrus and mango to the fore. Crisp and refreshing to the finish.

Dextrin, Ale, Wheat, Oats, and Crystal keep the malt end up, noticeable in the fuller body and a touch of caramel. Quite a delicious and easy drinking fruity ale to be fair, well made, and worth a try for sure.

They say: Rambler pours a light orange colour with a tight white head. We have used 3 hop additions of El Dorado, Enigma, Eukanot at whirlpool and dry hop. This combo contributes flavour & aromas of orange peel, watermelon, citrus and white grape for drinkability of smooth fresh juice with low carbonation. 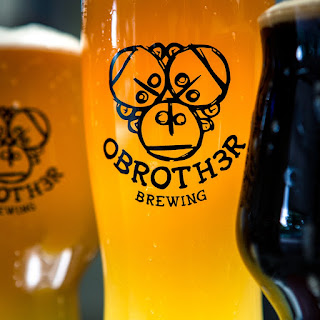 This IPA by the brothers has a hazy light orange colour with a big soft white head that sinks but slowly. There’s a kind of sweet tangerine peeping through in the mostly tropical aromas including a hint of coconut.

Quite a complex melange on the palate (a smooth one - they have oats in the ingredients), tropical for sure including mango (strongest), pineapple and a touch of coconut, not forgetting the citrus. They’ve struck quite an impressive balance here and the beer is all the better for it, nothing off the scale at all. Sure to find quite a few admirers, I’d say, including myself!

Hard to find much on the web about this one other than that the hops are Mosaic and Sabro.

But, while searching, I found out on the O Brother site, that craft beer didn’t reach America until the 1970s when air travel became cheaper. “As Americans sampled the hoppy delights of countries like Belgium and Germany many were hooked by their superior quality and began brewing similar beers illegally back in the U.S. As the craze didn’t appear to be slowing down, home brewing in the United States was legalised in 1979. A great decision we think!”

Very interesting indeed, but I would like to see a little bit more, not necessarily every little detail, about their individual beers.