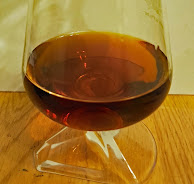 Taste of the Week.

This limited edition Cherry Brandy, of which I'm very fond, started life in August 2019 and three years later was named (with extreme bias) as Taste of the Week. The brandy was your basic Hennessy. The cherries were pretty basic too, from a supermarket as far as I can recall. They were nowhere near as good as those from the Apple Farm (I was too late for those) but they did the job well.

I was following the recipe in Booze by John Wright, No. 12 in the excellent River Cottage series of Handbooks. They advised not leaving the cherries there for too long  as "the almond flavour is extracted from the stone" and your cherry brandy "could taste inescapably like..disgusting, pink medicine.."

So forewarned, I separated the cherries and bottled the liquid just after the minimum two months on October 18th 2019. Then the Cherry Brandy was put away and patience reigned. I could have started drinking it after 12 months but it was just about two weeks back, (nearer to three years), that I started. 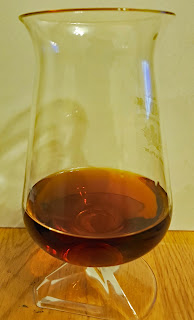 The result was excellent. Well worth a try. By the way that River Cottage Booze book has tons of recipes for similar infusions such as Blackberry Whiskey (mine is still unopened) and Raspberry Vodka (very easy to make and easier to drink!). Also some wine recipes including Strawberry and Elderberry. Some ales too!