A Quart of Ale± #61. On the craft journey with a mixed session, rounded off by a superb Yellow Belly "Red Noir"

On the craft journey with a mixed session, with this superb Red Ale the final can of the four. 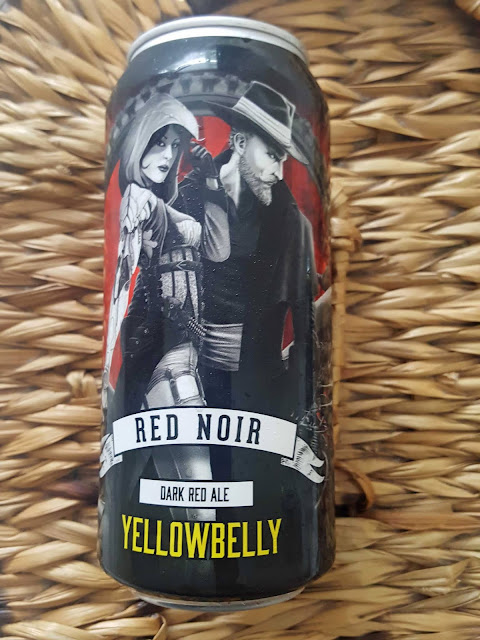 They say it’s a dark red and it is, very dark, more black than red with a slim milky-coffee coloured head (shortlived). Aromas, caramel and toasted malt, are pleasant, if modest. You get much the same but more intense on the palate, caramel, chocolate prominent here. It is very smooth, very flavourful, very dark. Just wondering have Yellow Belly come up with a new style here, the dark Irish red ale?

They say: How a Red Ale is supposed to taste. Mild aromatics of sweet toasted malt and light smoke entices the drinker to this dark decadent red ale. What follows is a velvety smooth beer with a complimentary combination of chocolate and dark forest fruit flavours on the tongue.

The Wexford brewery didn’t quite realise that it had a big hit in this one in its earliest incarnation, regarding it as a seasonal if not a one off. But popular demand has its way and, since early this year, they responded to demand and now Red Noir is part of their core range. I can understand why and very happy that the Belly took notice! Tending more toward the simple than the complex yet simply superb! 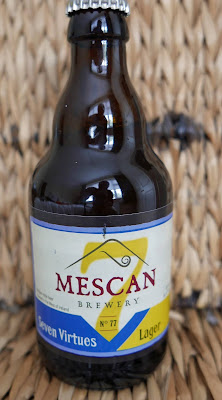 It’s got the nice golden lager colour and billions of bubbles rising up to the soft white head. A bit of citrus and grass (not that grass!) in the aromas. On the palate, it is a bit more than your usual lager - it is after all dry-hopped. But it is crisp and refreshing, easy-drinking. Well worth a try!

They say: Virtues lager is the first in a series of one-off brews. Crisp and slightly dry hopped, a nod in the direction of both tradition and innovation.  Serving Temp 2 - 4 °C. Note that serving temperature, somewhat lower than usual.

Mescan always pay attention to matching their beers with food and last year even invented the Mescan Food-Pairing Wheel, designed to take the angst out of matching beer and food. It’s an easy way to pair each Mescan craft beer with the foods that complement it. It’s available on the website and is easily printable from a pdf format. It’s a useful resource for all the home chefs who are exploring new options in their kitchens during the pandemic.

“Mescan craft beers are exceptionally suited to enjoying with food”, said Cillian Ó Móráin of Mescan Brewery, “We were inundated with queries as to the best pairings from consumers and from restaurants and bars. We wanted to create something simple yet effective that would help people enjoy our beers with the optimum foods – hence the Mescan Food-Pairing Wheel was born”.

Check it out here to see what goes with this lager. 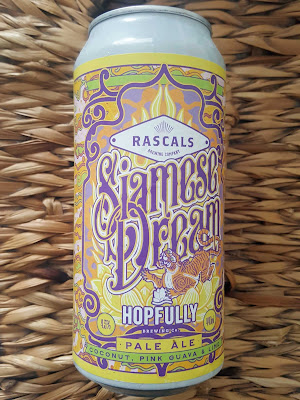 This Pale Ale collaboration between Rascals and Hopfully brings you a bagful of Far Eastern flavours, specifically coconut, pink guava and lime zest (all listed as ingredients).

There’s a hazy yellow colour. Aromas are rather modest. But it certainly delivers on the palate reaching, as promised, every corner with aromatic sweet pink guava, lime zest and coconut. A delicious easy-drinking ale, nicely-timed for the summer!

They say: The beer is brewed with Sabro and Sorachi Ace hops. The latter is a Japanese hop known for its lemon, coconut and even bubblegum properties. Meanwhile, Sabro hops offer fruity and herbal flavours and aromas, with noticeable coconut, sweet citrus and tropical fruit characteristics. Overall you’ll get a nice coconut hit up front, followed by a gorgeous tropical sweetness from the guava, and then in the finish there’s a spirited citrus payoff from the lime zest. Oat malt and Vermont yeast ensure a smooth mouthfeel and enticing hazy appearance. 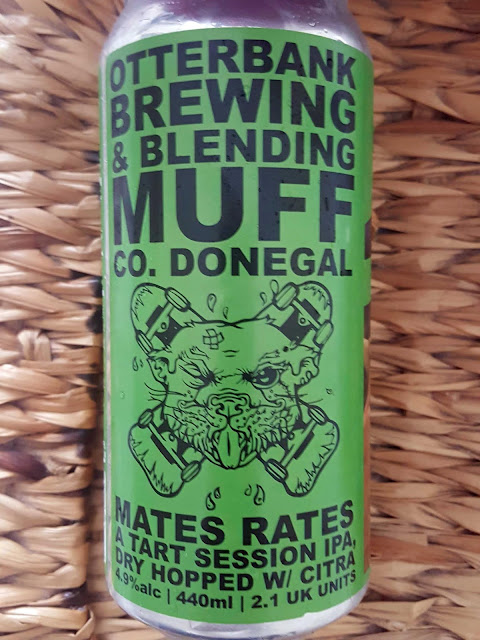 Poured this a little too vigorously and got myself quite a head, a head that was slow enough to sink. Actually a fingerful of that head gave me the clue that citrus would be a factor. Light gold is the colour and there’s no shortage of carbonation activity. And citrus is a key feature on the palate; refreshment’s another. A sour for sure but a well balanced one. Sour is not my favourite style but the balance here keeps me onside.

Otterbank are described as a brewing and blending outfit and the brewer is none other than Declan Nixon of Yellow Belly, themselves known for their sours. Otterbank is a bit on the side. By the way, this was brewed at Third Barrel by and for Otterbank who are based in Muff, Donegal.

The label also informs us that the malts are Pils, Cara, Clair, Wheat, and Oats while the hops are Pacifica and Citra (used in the dry-hopping).

By the way, Session is also used on the label. I’d have thought that the abv would have to be at 4.5 or under to earn that tag. What do you folks think?