The young sheep rush into their new ground and the words con brio come to mind as they dash hither and thither and investigate their new surroundings on a grassy slope near Kenmare.

And the same words could well be applied to the enterprise at the top of the town’s Main Street painted blue and known as the Tom Crean Base Camp. Aileen Crean O’Brien, grand-daughter of the legendary Antarctic explorer, leads a team than runs a B&B, a restaurant and a micro-brewery, all under the one roof.

Aileen and her family seem to have inherited the determination, endurance and enterprise of her grandfather. Indeed, in 2016 a bunch of them set off for South Georgia to see at first hand what Tom had experienced in his third trip to the region (this with the explorer Shackleton).

They certainly experienced the real thing and Aileen ended up with a broken leg and they had to wait to get to Chile to get that sorted. And, on her return, she didn’t sit back and take it easy but resumed her duties as head of the kitchen. Staff, we were told, gave her and her crutch a wide berth for a while!

Friends had told us that Aileen is an accomplished cook, having learned the ropes in the kitchen at the town’s famous Park Hotel under the guidance of Michelin head chef Matt d’Arcy. They later married and opened their own restaurant but Matt’s untimely death meant Aileen had to leave the business while she raised her young family. She came back in 2009 and refurbished and renamed the restaurant and accommodation in honour of her grandfather. And it keeps expanding.

The latest enterprise is their micro brewery and that was our first visit on what turned out to be quite a day in Kenmare. We had booked our tour for 3.00pm and met our guide Bill Sheppard who co-founded the brewery with Aileen in 2019. The couple had met during one of her trips to India and they married earlier this year. 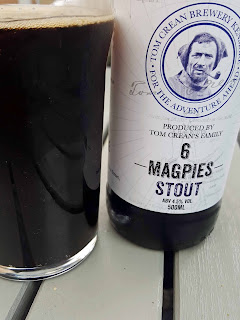 Bill was born in Chester in the northwest of England. He worked as a fire fighter in the London Fire Brigade and later graduated from Chester University with a degree in Archaeology.  Now he has retrained as a brewer and is turning out quite a range of Tom Crean beers, everything from the 1% Last man Standing to the Six Magpies Stout with lots of ales (pale and red and IPA) in between.

Most of the sales are direct from their premises and he also delivers around the town pushing his trusty sack-truck. But they do have a van. After all they have customers in other Kerry towns including, appropriately, Tom Crean’s birthplace of Annascaul.

As Bill told us the story behind the brewery, we sipped from a number of the beers, including the St Bridget’s Lager; the saint was a brewer herself. Druid’s, the wheat beer, “celebrates the landscape” and another new beer, Kerry Surf & Turf, is a tribute to land and the sea. He reckons his 6 Magpie Stout is as good as any around and Aileen uses it in one of her beef pies.

The café here is a daytime venture, understandable as they also do B& B here and the day is long enough. So, from 9.00am to 4.00pm, you may have breakfast and lunch. After that, up to 6.00pm or so, there’s pizzas and a few specials as well. And all of this, at the time of writing, is in an improvised outdoor setting in the yard alongside the little brewery. Outdoor yes but well covered; it lashed when we dined after the tour and, while the place is airy enough, not a drop got through! Suppliers are all local and you can guess where the beer comes from!

The highlight for me was “Star Seafoods Gratin” (Scallop shell, piped with mash, cod, salmon, mussels, vegges, seafood sauce, Cheddar Cheese, and Billy’s Mixed organic leaves, with fries), all in all a superb fish pie! CL meanwhile was quiet enough, concentrating on her very tasty Fish Cakes with Pineapple Salsa, Chips and Salad.  No shortage of fish in those cakes. By coincidence, Star Seafoods are a local Kenmare firm and we get quite a few deliveries from them here in Cork city, indeed, I saw them selling fish in Blarney yesterday, a very efficient outfit indeed.

Aileen, after her shift in the kitchen, then came out for a chat and that brings me back to the sheep. “Big day tomorrow getting our sheep for my front garden.  We finally got a herd number,” she told us.  “We produce our own electricity (P.V. panels provided by local firm Pro-Solar). and use the spent grain for dog biscuits (customers' dogs benefitted!) and muffins.  We will be able to feed the sheep the spent grain now and, later on, sell the lamb in the restaurant.  We are also awaiting our number for pigs and will do the same with them.  Really excited about it all.” The sheep, two boys and two girls, are settling in well and are already known as the Bonane Babes.

Quite an enterprise going on here. Quite a woman. Think her grandfather would be very proud of what Aileen and the family have accomplished here. And they’re are not finished yet!

Also on this trip: Three Days in Kerry, from Dingle to Kenmare. Check out the sights, the food, the hotels and B&Bs here.