From Dingle to Kenmare in the Kingdom. Highlights galore on Kerry coastal drive. 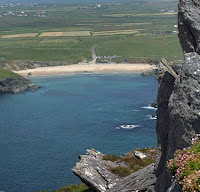 From Dingle to Kenmare in the Kingdom.

We got in of our favourite walks, Bray Head on Valentia Island. A brewery tour and terrific food at the Tom Crean Base Camp was another highlight. Lucky too in that we stayed at three lovely places, all helpful, especially Hannah at Muxnaw Lodge who drove us back into town for dinner when we asked for a taxi. The weather in Kenmare was wet but we had a magical night strolling around Dingle’s harbour after a massive feed at the Fish Box. And much more on a recent 3-night 4-day trip in Kerry.

The drive down from Cork took us first to Tralee and a look at the impressive Tralee Bay Wetlands Eco & Activity Park. Lots of activity here for families, including pedal boats on the lake and a massive climbing wall for the adventurous. Had hoped to enjoy a lunch here but it wasn’t to be; all the café had to offer were over-sweetened waffles. Perhaps the menu will expand as the season goes on and as more visitors come. Our server did indicate that they hope to have sandwiches and salads (these already appear on the online menu).

Soon we were on the road to Dingle via the Conor Pass of course. Great views of Dingle from the parking area at the top and they get a little better if you climb up the hill alongside. A few minutes later we were in Dingle itself and heading for the coast. Both Ventry and Slea Head were packed so our first real stop was Clogher. Time for another walk to the top here and great 360 views that include the Blaskets and Sybil Head.

Enjoyed that interlude and we headed back to Dingle and to Bambury’s Guest-house, our base for the night. Enjoyed the welcome here and took it easy for a short spell before heading out looking for food. The Fish Box was our destination. It was first come first served. We didn't have to wait long for our table in one of their outside booths. Here they have some sixty covers.

The owners, the Flannery family, have their own boat and the menu is mainly about fish. Quality is good but quantity is massive.  Ours,  The Fish Box and the Spice Box, came not on  plates but on trays. Quite a choice here but if you are going for one of the boxes you’d be advised to skip the starter. We didn’t!

We saw pints coming in. The Fish Box is more or less next door to Dick Macks and you can enjoy the ale and the stout from the micro-brewery. And there’s also cider from Stonewell and a short wine list. After that, we strolled down to the water where the views and sounds of the sea and the many boats were enthralling. Great buzz there too with people hanging out, some going  canoeing and others returning from their boat trips.

Next morning after a lovely breakfast from Bernie and her Bambury team, we were on the road again, this time heading for the Iveragh peninsula. First stop was the car park for Bray Head Walk at the southern end (Portmagee) of the island. There is a parking charge of two euro. We’ve had better days on this marvellous walk but even on a dull day it is enjoyable with views out towards the Skelligs, the cliffs and back towards Portmagee  and the bridge (on which my father worked) that links it to the island. I didn’t time it but I think the walk to the tower at the top and return takes something under 90 minutes, probably less if you’re under 70 and not taking so many photos!

Our base for the night was the old Glenbeigh Hotel with its own parking and large gardens. Though most of the meals are served in the old bar, a large one, they also have a beautifully decorated Garden Room where we enjoyed a really good breakfast. No surprise to us at that stage as the evening meal was quite splendid and featured some excellent fish dishes including their Seafood Mariniere for example, packed with fish (fresh salmon and white fish) and shellfish (mussels and prawns). There’s a very friendly and efficient team in place. The only downside was the hit and miss (mostly miss) WiFi.

We could see over the gardens to Rossbeigh beach from our window and we headed there after breakfast for a long walk. Back on the road then, heading for a stop at Waterville. Busy enough here with Micko Dwyer and Charlie Chaplin in their usual positions. 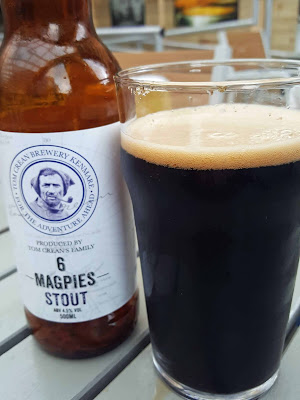 We had some early afternoon appointments in Kenmare so didn’t have as much time as usual to dally. The rain arrived in Kenmare at the same time as ourselves and kept getting worse until about seven in the evening by which time we had packed in a lot, including our visit to Tom Crean’s.

That started with a tour of the micro-brewery given by co-founder and brewer Bill Sheppard. Like his wife, Aileen Crean O’Brien (grand-daughter of the famous Antarctic explorer Tom), Bill is a get and go person. They now have a range of about eight beers and you can read all about them and the tour here. Bill's tour includes details on the beer and his method of brewing of course but he also details Tom Crean’s adventures there along with the tale of the trip that the family made to the region in 2016.

Aileen is the cook here, quite an accomplished one indeed. Watch out for her fish dishes. I reckon her Star Seafood Fish Pie is as good as you’ll get anywhere! And, of courses we had a few beers, including their lovely 6 Magpies Stout to go with the food.

After the tour, we had headed to nearby Muxnaw Lodge (WiFi didn’t function here either) in its lofty location overlooking the bridge. Here, we asked owner Hannah to phone a taxi for us to return for the meal. She wasn’t having any of it and drove us over herself! We really appreciated that very much indeed and the lovely breakfast the following morning.

Also on this trip: Tom Crean Base Camp Kenmare where you'll find a B&B, a micro-brewery and a restaurant. Eat, Drink and Sleep!