A Quart of Ale± #60. On the craft journey. A session of Cider with Cockagee, Viking and Bordelet.

On the craft journey with a session of Cider 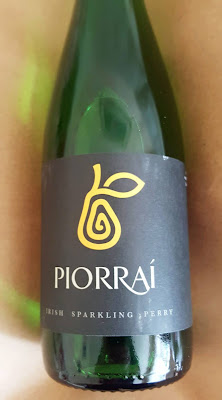 Perhaps the most striking aspect on seeing this Irish sparkling Perry as it is poured into the glass is the myriad of bubbles streaming upwards through the light gold colour.  The aromas are certainly reticent, a barely detectable floral note. The palate is rather special though, a classic dry Perry, refreshing and crisp, and packed with flavour but not over-packed. Just spot-on as it the case with all of Mark Jenkinson’s ciders that I’ve tasted over the past few years. If you see Cockagee or The Cider Mill or Jenkinson on the label, don’t hesitate to use that credit card.

While there was a gap of a few days between tasting this and the Bordelet Poiré, I’m inclined to give the nod to County Meath. But I’d have no problem with a rematch.

The Piorraí is made from hand-picked Irish grown French Perry pear varieties ‘Plant de blanc’ and ‘Poire de cloche’. These varieties are among the most highly sought after in Brittany and Normandy for making Fine Perry, or Poiré, as it is known in France.

These apples, like many cider apples, are far from the prettiest and you wouldn’t want to eat them but ciderists like Mark patiently work their magic and turn the ugly pears into elegant perries that stand out in the crowd.

Enjoy chilled on its own or with strong cheeses, charcuterie, white meats and shellfish dishes. 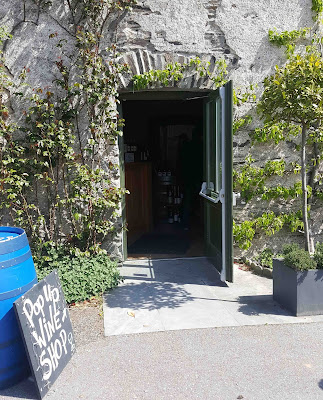 They say: Cockagee – Our somewhat unusual name is a revival of the once famous Irish Cider Cockagee first mentioned in 1664. Originating from the Irish language ‘Cac a gheidh’ which translates as ‘goose turds’ and refers to the yellow/green colour of the fruit from the Cockagee apple tree. In the same way that ‘Duck Egg Blue’ is a colour descriptive, ‘Goose Turd Green’ was once a common colour, although I doubt you’d find it on a Farrow & Ball paint swatch nowadays.

Distributors Le Caveau: “Mark is growing 120+ varieties of apple across his 12 acre orchard located near the town of Slane. Apples are grown without the use of chemicals and are hand-picked.” 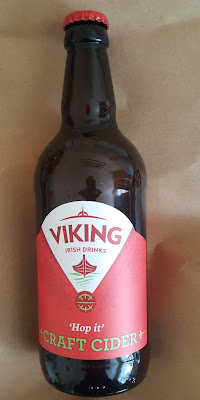 Hop It is aptly named as Viking use a trio of hops - Cascade, Amarillo and Citra - in this cider. They may not be the first to do so; I think Stonewell (who’ve been using El Dorado in the superb Tawny cider that they started producing in 2014) may have that honour.

Viking say: Hop It is a blend of Katy (dessert apple) and Vicky (new bittersweet early cider apple) apples. The blend needs the fruitiness of Katy and the bitterness of Vicky to create harmony with Cascade, Amarillo, and Citra hops, thus lending tropical flavours to this cider. Suitable for Coeliac and Vegan Friendly. Hop It is ideal for people who like the taste of Hop beer but cannot tolerate gluten.

Hugely respected cider-maker, Davy Uprichard of Tempted, has a very different view of Katy. On an internet forum early this year, organised by BeoirFest, his thoughts were clear: “ Katy is an abomination - I don’t use it all”. Different strokes for different folks!

Colour is quite a light gold and there’s no shortage of bubbles in the slightly hazy glass. The first impression is of tartness, crab apple style. It boasts a good dry finish as well. But is terrifically refreshing and I can see it doing very well indeed with the recommended pairings of BBQ food, smoked fish, Asian delights, pizza, Irish farmhouse cheeses - the list goes on and on. “Hop It must be a foodie’s dream! Apart from enjoying with food, pour Hop It cider slowly into a tall glass and savour the delights of a craft cider with the treat of a hop taste. Enjoy.”

While the hops play a role in the balance, you’ll also notice, though not very obviously, traces in the flavours and, a little more prominently, in the aromas.

Cider Makers Tip: Viking Irish Drinks at Dennison’s Farm was set up as a company in 2017, with cider production commencing in 2019. At the heart of the company is three unique craft cider styles, based on old farm recipes, including Medium Dry Orchard Cuvée, the immensely popular Harvest Blush and Ireland’s first Hop flavoured cider, Hop-IT. 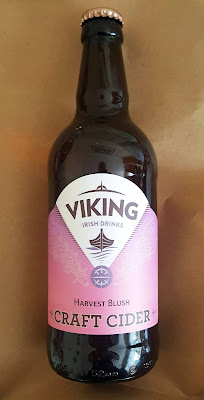 The Harvest Blush gives a clearer mid-gold colour in the glass than does the Hop It. Plenty of bubbles here also. And Katy too! It is one of two varieties, the other being James Grieve (also a dessert apple), used to make it.

Both are usually in harvested in August. Harvest Blush is fermented slowly on its natural yeasts for up to six months, and then “we add our soft fruit juice to create a light blush and adding fruitiness of the berries, yet importantly retaining the style of the cider. Our bottling condition allows us to create a light natural sparkling cider, which is a good alternative to a sparkling wine.”

So is it sweet? Not overly so. Might be fairer to say it is much less bitter than the Hop It and no doubt a good match for fresh strawberries, raspberries and fruit pavlova. Viking also recommend seafood / shellfish, also good with pork loin and roast chicken. “Versatile, this cider will compliment most food from starters to dessert!

The Blush is softer, easy-drinking. Hop It is known as a hard cider in the US; harder-going perhaps but worth the effort.

They say: We recommend Harvest Blush to be served chilled at 6-8 c, and it can be served as an aperitif, like a good Prosecco but lower in alcohol, which is an excellent choice for receptions / weddings and parties. Can be bottled in Champagne style bottles for events (pre-ordered only).

And they also have a Viking Irish cocktail!

Viking Irish Drinks derives from orchards in the Barony of Gaultier, East Waterford, near the estuary of the three sisters - the Barrow, Nore and Suir rivers - where the Vikings sailed and conquered cities, towns and villages. 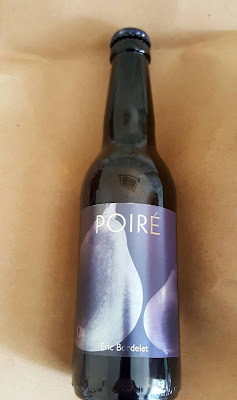 This Poiré, as the name indicates, is a pear cider and is one of the best ciders, apple or pear, that you are likely to come across. Colour is a pale gold and then follow aromas and flavours of the orchards. It is on the dry side, a delicious thirst quencher and, with its clean acidity, importers Le Caveau indicate that it is a “great food pairing for scallops, savoury crepes and all manner of salads, delicate fruit based desserts or even cheese. Versatile, refreshing and delicious!”. No arguing with that.

It is biodynamic and made in the traditional manner from old orchards that have never been sprayed. In the 1980s, Eric was a well known sommelier at Paris’s Michelin 3-star Arpège restaurant but his native Normandy and its famous ciders were tempting him back. He thought he could add to their reputation by applying his wine knowledge and so he came to take over his family’s Chateau de Hauteville and extended the orchards. Now he is on the short-list of the world’s great cider makers. Check him out!

Th label tells us this sparkling thirst-quenching fruity flavoured is produced from the  “living and stony soil of the Coteaux de Massif Armoricain”, the production “concerned with your sensory pleasures and your health”. Reckon I’ll drink to that. Wait, I already did. And will again.