Ingenuity & the Bounty - the Seafood & Wine Dinner at Ballycotton’s Bayview Hotel.  FEAST 2019 is up and running!

From the Norrie Rancheros via the Octopus’s Garden to the Slocked Apples and Blakas, and all that delicious aromatic Albarino in between, we had quite a ball at Ingenuity & the Bounty - the Seafood & Wine Dinner at Ballycotton’s Bayview Hotel in association with Rias Baixas Spanish Wines and the first major meal of FEAST 2019. 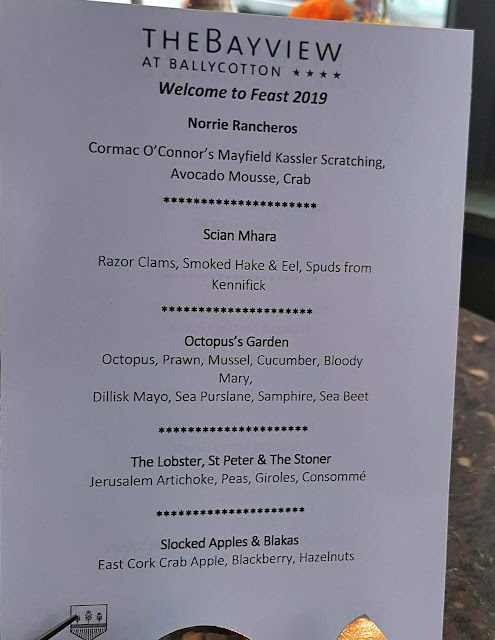 Leslie Williams pointed to the harbour down below as he introduced the wines from the rias. “I love this part of the world. Ballycotton is a perfect place to serve Albarino. It is the most marine wine.” The fruit is grown in the lower estuaries of the long rias (sea inlets) that penetrate this north western region of Spain. Just spread out your fingers with the back of your hand upwards. The gaps between your digits are the rias, the rest (the low ground or baixas) is where the vines, tended mostly by women (the men away in the cities working), grow.

You can see the amazing menu in the photo: so many types of fish included - Crab, Razor Clams, Hake, Eel, Octopus, Mussel, Lobster, St Peter and The Stoner. And from the sea too came Dillisk (for the mayo), Sea Purslane, Samphire and Sea Beet. St Peter’s fish is the John Dory while The Stoner is the rock bass.

A superb meal then with a sweet finish - on the double. The dessert was the Slocked Apples (I know this practice of “hobbling” apples from an orchard as slogging) and Blackas (the local name for Blackberries). When the coffee arrived, so too did some substantial treats as you can see from the photo! 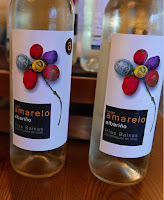 Leslie’s three wines went down well. We started with the Bago Amarelo 2018 by Adegas Galegas. Think we’d all have been quite happy to carry on with that. As a wine expert of my acquaintance declared at a recent tasting: there is no such thing as a bad Albarino.

But, at the Bayview, we found out some Albarinos are better than others! Certainly, the Santiago Roma Albarino 2018 from Bodegas Santiago Roma, while having the typical acidity, was more intense in all aspects than the Amarelo, including texture, aromas and flavours.

I had been expecting the Terras Gauda O Rosal 2018 to be the top wine. But had my doubts after the first sip as the Roma lingered strongly. But soon the O Rosal began to assert itself. It may not have had the forward intensity of the Roma but this more rounded, more sophisticated wine proved itself once again in the long run. No wonder Leslie declared it his favourite Albarino.

This was the first major event of Feast (which started impressively at the Castlemartyr Resort Hotel on the previous day). And Stephen Belton, who manages the Bayview along with its big sister across the way, the Garryvoe, was in fine voice despite cheering on Dublin in Croke Park 24 hours earlier. “I’m delighted with the evening. Thanks to everybody for coming. We’re into our food here but not pretentious about it, very relaxed with our well sourced well cooked offerings. And great to see Feast expanding. There is so much to offer in East Cork now. A fantastic offering that can compare with any other place. East Cork is still emerging and Kevin and company are putting it up on the national stage.”

The Kevin he mentioned is Kevin Aherne of Sage in Midleton and he was next to speak and acknowledged that there was a business element, of course, to the festival, the hope being to attract more visitors to the region. “But this year we want the community of East Cork itself to enjoy it. There are now 40 events, spread over 7 days and it is growing, getting national, even international, press attention. Great for the growers, producers, chefs who enjoy it themselves.”

“Ireland is now a benchmark of world food and Cork is the best of that. East Cork is a part of it too and we want you to enjoy yourself. Taste the food. Have a drink. Have a laugh.” Not a bad motto at all and there is loads more to do from here until Sunday. Check out the events here at FEAST
Also at Feast