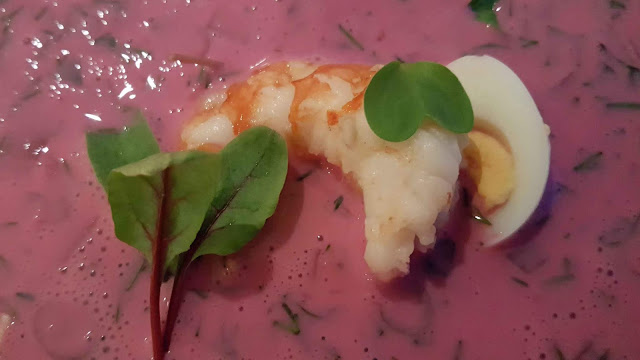 “We got all those spices before France did,” said a smiling Patryk Suchojad, chef/patron at Midleton’s Surf and Turf, as he welcomed his guests to a Feast from Europe’s East, an event in this year’s FEAST.

He explained that Poland is a big country, the cooking in the north mainly fish based, while that is the south is mainly from the produce of the land. That's probably a bit too simplistic; he went on to tell us that there are many regions, each with its own profile on the table.

“That Pierogi dish on this evening’s menu, for instance, is stuffed with potato and curd cheese, but can really be stuffed with anything you like, varies from region to region. We have a long culinary tradition and indeed we did get those spices, via Iraq and Iran, before they found their way to France!”

“There are a lot of similarities between Irish and Polish food, cabbage for instance,’ He said with a broad smile. “We both love our food.”  “Polish food is basically a humble food, home cooking and you’ll see that in the Pork Lard on your table. That lard may include onions, garlic, spices. Sometimes it is smoked, may be kept for a long time. Very popular and many restaurants serve it”. We certainly enjoyed it, especially on the delicious bread that came with it.

Vodka was then poured for the guests and Patryk, who has been operating Surf and Turf on Distillery Walk (MIdleton) for the past two years, told us a bit about the śledzik. “We usually use herring but I couldn’t find any around here - maybe I didn’t try hard enough - but got the mackerel from Ballycotton. White wine and vinegar was used in the process. I love smoking stuff and I did the mussels for you.”

That śledzik by the way was an amazing plateful (a generous one too and that generosity was repeated throughout the very enjoyable evening). It consisted of Kombu pickled mackerel, cured mackerel with horseradish apple and sour cream, gin and juniper brined sea trout, and those smoked mussels.

Now, as we sipped the last of a trio of different Polish beers, it was time for the main course, the Zrazy. This is a beef roulade, hunter’s sauce (mushroom mainly), Silesian dumplings, braised red cabbage. Quite a plateful and that roulade was outstanding. The beef had been “hammered” and rolled, packed with veg (including onion and carrots) and covered with smoked bacon (“proper bacon, not the injected stuff”). As you can imagine, this was full of flavour, a really worthy main course, crowning all that had come before.

And there was still time for an impressive finalé. The Szarlotka is a Polish style apple pie, baked uncovered, and made, not by Patrick, but by the lady of the house and served with Bison grass ice-cream. There’s a story about that ice-cream. I’ll tell you when I meet in the pub some night!
Also at Feast 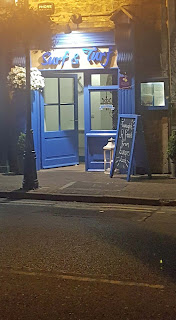