September 30, 2019
Kinsale's Perryville House is Guesthouse of the Year

Congratulations to Perryville House in Kinsale. The splendidly situated house, with excellent views over the harbour, was named Guesthouse of the Year in the recently announced and highly coveted Georgina Campbell Ireland Guide Awards 2020.

By coincidence, I had stayed there a few days before the awards were announced. Most of the guests had travelled much further; this lovely waterside venue is very popular with American and European visitors.

Must say I was very happy indeed to see Perryville win, if only for their support of Irish produce. When we checked in, the first thing I noticed in my room, alongside the Espresso coffee machine, was a pack of shortbread biscuits. No, not those anonymous packs you get elsewhere but the delicious Seymour Biscuits that are made by Philip O'Connor in the neighbouring town of Bandon.

Later that night, much later, I called to the amazing comfortable in-house bar here. I knew they hadn’t draught beer so I enquired about bottles and again they came up trumps with the local Black's Brewery 1601 lager.

Before heading out to dinner that first evening, we were strongly advised not to miss the breakfast. "It would be foolish to do so!" Good advice indeed, not that we had any intention of skipping it in any case. 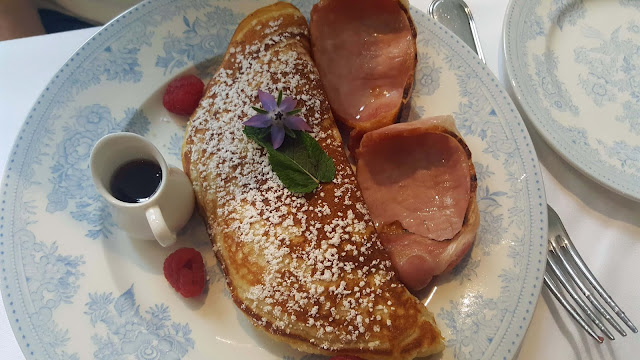 We weren't disappointed. The breakfast is indeed unmissable and served in a room to match. And the menu is based on local produce and includes Gubbeen cheese, Glenilen yogurt, Barrett butchers sausages and bacon, and Hederman smoked salmon.

The hot menu includes their creamy organic porridge served with cinnamon-infused soft brown sugar. Of course, they have the Full Irish and shorter versions. And they also do a Pan-fried fish of the day. French toast with poached berry compote is a favourite. Pancakes are a favourite of ours recently and theirs, packed with berries, come with maple syrup and few more berries for good measure, nicely presented too. 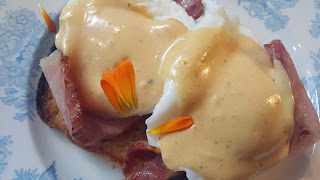 If you read the reviews, you’ll note nothing but praise for their Eggs Benedict. I tried it and gave it the thumbs up. Two fresh eggs (just delivered by Siobhan from her nearby farm) on toasted sourdough, crispy bacon too and all smothered in sauce. Delicious

The cold buffet is eye-catching and includes fresh orange juice, iced water, granola, boxes of other cereals, a mini-fridge with yogurts, home-made preserves (Lemon Curd, Raspberry, Marmalade), honeycomb from the owners’ bees, their own pastries (include pear/almond scones) and bites sized slice of cakes (eg blueberry).

A big bowl of mixed fruits and other tempting fruit dishes such as poached plums and poached rhubarb in honey. And then there’s all that well-known West Cork Cheese with grapes and chutney. No shortage of anything and great service as well in this friendly place. And lovely too to meet up with Emily at check-out. We used meet her regularly over Karwig Wines. She was helpful there and is just as helpful here, as was everyone one we met in Perryville. 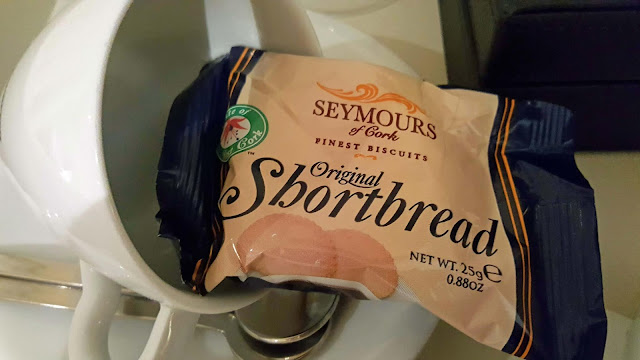 This is the full citation for the award:
More country house than townhouse, Andrew and Laura Corcoran’s Georgian harbour-front home is the prettiest in Kinsale. Renovated and furnished with style, it is immaculately maintained and offers plenty of relaxing space, including a handsome bar and garden room, as well as outstanding accommodation in generous and extremely comfortable rooms (with luxurious bathrooms). Ten new rooms were added this year - so seamlessly executed that the casual observer would never guess at any recent changes. And, masters of detail as always, they even created a stunning new garden to the side of the building so that rooms without a seaview would have an equally pleasing outlook. All this plus great service and, reflecting the Corcorans’ Slow Food philosophy, carefully considered food. An outstanding destination.