There is great cooperation between the hotels, restaurants and bars in the city. The sentiments of Aaron Mansworth of Trigon Hotels and reiterated by Mags O’Connor of the Cornstore as the Cobh Clams descended on the Bodega and as we spoke about what it takes to put an event like this Cork Gourmet Trail on the road.

Better explain, the Cobh Clams were one of five large groups taking part in the 2019 edition of the Trail and the Bodega, where neighbours Cornstore also had a stand, was our first port of call. The other groups that would follow, at intervals, were Bantry Barnacles, Monkstown Mussels, Leap Lobsters, and Shanagarry Scallops.

The event, part of the Cork Oyster Festival based at the Metropole (one of the Trigon hotels), began at noon and ended late-ish in the Met and in between visits were made to Cask, Dwyers of Cork, Greenes, The Oyster Tavern, Electric, Soho, Tequila Jacks, The New Yorker Bar & Bistro, Olivo at the Cork Airport Hotel, the Cornstore, Gallaghers, the Bodega and Arthur Maynes. We didn’t walk out to the Airport by the way as both the New Yorker and Olivo were accommodated in the city. 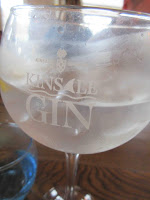 So what can you expect on a Cork Gourmet Trail. Quite a lot and all quite delicious, something for everyone. The Cornstore/Coqbull menu for the event is an excellent illustration.

And the welcome here was warm, a drink (red and white wine and more) offered immediately. A table top full of local and international charcuterie and cheese, including an ultra spicy Spanish blue, while alongside Bodega chef Dave had some beauties including Oysters baked in their own Grainne Ale beer and a delicious Basket Cheese Cake with whiskey among the ingredients! And if you couldn’t sample everything - nobody could! - there were some lovely takeout desserts from the Cornstore.

And that welcome and choice of food and drink set the scene for the long afternoon, replicated all the way. More wine and hospitality on offer at Dwyers in Washington Street where we stuffed ourselves into the various nooks and crannies, every now and then replenishing at the stands of Dwyers itself and the New Yorker. The New Yorker’s Chicken Croquette, home-smoked in Barry’s Tea, was one treat, while one to finish with was the Jameson and Ginger Cheesecake by our hosts.

Next stop was Electric who treated us to oysters and a Kinsale G&T. Kinsale Gin are among the sponsors. Earlier we started as we gathered in the Vance Room in the Met with yes, a G&T and oysters, before being divided up into the various groups and being introduced to our leaders. Our guide was Ray from Trigon and he didn’t lose anyone!

After Electric, we strolled down the Mall to the lovely and lively Tequila Jacks. More wine and also some delicious Tequila based cocktails and more good food, both from our hosts (a superb taco, also delicious Pork Belly) and some savoury and sweet stuff too from Olivo (including some well presented dessert bites).

Cask was next on the itinerary and here also we met Gallaghers and the MET Tavern. Gallaghers had a trio of beauties including a Beef Featherblade with a Walnut Chutney. While the Met, with Head Chef Stuart Dardis on hand, had a great selection too including a palate pleasing tuna bite. Cask shone too, supplying the drinks and lots of their interesting tapas including exquisite prawns. And all the way through, it was smiles galore and helpful people even if, by this stage, they must have been explaining their offering for the umpteenth time that afternoon. Pure Cork!

We weren’t finished yet. Next stop was the Oyster Tavern and here we met a couple of stragglers from a previous group. They had stopped to do a bit of shopping in Penneys and were now running late! So we had a chat with that English duo as we had chats all through with whoever we happened to end up with, sometimes friends, sometimes total strangers, but no strangers when the day was through. 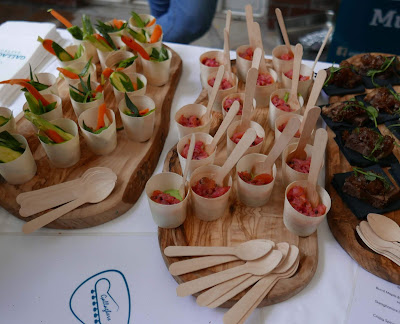 Another glass of wine in the Oyster and excellent food also. Soho were here as well and their Pork Belly was so good I called for it twice!

The final round-up was back at the Douglas Vance room in the Metropole but some were saying their goodbyes. We were humming and hawing about it as we strolled down Patrick Street. The rain, which had been intermittent all afternoon, was now pelting down and that, plus the fact that there was a No. 208 conveniently at our bus-stop, made up our minds for us and we headed home after a terrific day in the city. Well done to all behind the Trail, the Oyster Festival itself and to one lady in particular (who we are all thinking of this weekend).