Asado at Barnabrow House. FEAST’s Argentinian BBQ
The Argentinian BBQ (Asado) at Barnabrow, part of the series of the week-long FEAST Festival in East Cork, was sold out early on, the punters keen to see how Barnabrow’s resident Argentinian chef Mariano Sosa would introduce his homeland’s BBQ. Mariano, who has worked with celebrity Argentine chef, Francis Mallmann*, was assisted here by Barnabrow’s Head Chef Stuart Bowes.

Together Mariano and Stuart built a fire pit which was lit early on Friday morning. When we arrived about six in the evening, the cooking and smoking was in full swing over the slow burning hot ashes. No beef here but the eye-catching centrepiece was a whole lamb being cooked in the traditional way.
There was much more to see as pineapples and Midleton chickens, hanging from a  simple frame over the heat, were being smoked. Trays of stuffed peppers (eggs) were on the heat. Potatoes were cooking in the ash and organic leeks from the garden were being grilled.

Appetites were being sharpened as the audience watched from a wooden terrace overhead, wine and beer at hand, lots of soft drinks too as there were quite a few families attending in the lovely evening sunshine.The heat of the sun wouldn’t linger for much longer - the blue sky did-  so Barnabrow had wisely prepared the restaurant and soon we all headed there along with all that delicious food. 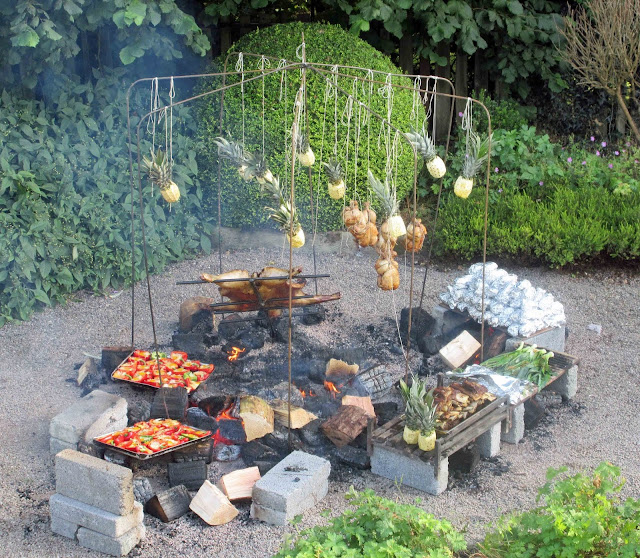 Then we tucked in as the platters arrived at the tables, packed with the various meats and all those vegetables along with simple Argentinian salads and their chimichurri sauce. Not too much talking now as we savoured the mix of smoky flavours. Not too smoky, mind you, that element was very nicely judged indeed. All delicious though I must admit I really enjoyed those potatoes and also the leeks.

A couple of platefuls later each and it was time for a walk. A little one, just across the walkway to a room where a splendid array of desserts were temptingly arranged. Didn’t think I'd manage that Valrhona Chocolate so settled for the juicy Cranachan Irish Raspberries.

* Mallman (who you may have seen on Chef’s Table on Netflix), by the way, did a similar exercise next door in Ballymaloe at LitFest a few years back.
Also at Feast


Barnabrow is famous for its Sunday lunch and its wedding receptions but there are many other events here too, some coming up soon.

Santa is coming to Lunch on 8 and 15 December and there's an Afternoon Tea there for Women's Little Christmas on 4 January.

And you may need to start thinking about ordering their superb Christmas hampers, ranging in price from €30 to €80.