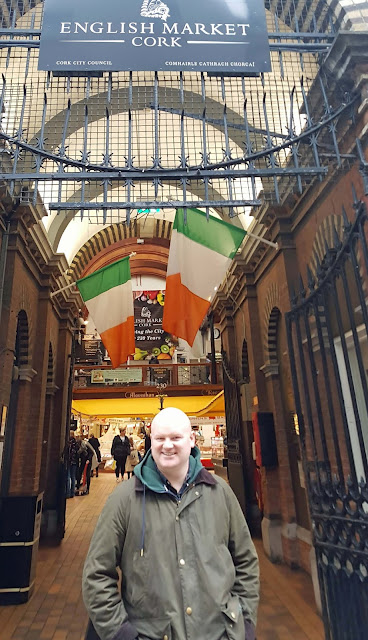 Nigel Cotter, the Douglas man who was recently awarded the Market Lane Culinary Scholarship with CIT, has taken a long road to cheffing. He is a qualified butcher and has spent over ten years in the trade.

And it was while working as a butcher that he began to appreciate quality of produce. He credits an early mentor, Flor Kent, with giving him a good all-round picture, of the trade, of food and of life. And that butcher background is now a massive plus as he studies to be a chef.

But cheffing had always been somewhere in his mind and that has much to do with his mother who was a farmer’s daughter. Her roasts were spectacular, memorable. But with a whole animal from the family farm available, she had to use all the cuts and they had meat, stews and steaks and so on, all the year round variety.

Nigel still appreciates the meat of course but nowadays tends to cook a lot of fish at home. “We are an island nation, we should be using more fish.”

And it is not just at home that Nigel cooks these days. As part of his CIT course, he had to find a restaurant that would give him 400 hours placement. Luckily, Brendan Cashman’s Gallo and Galetti, where both Nigel and his wife enjoy eating, took him on and now that 400 hours requirement has been well and truly exceeded.

He was delighted to accept the scholarship that will help him extend and enhance his culinary education, “It is an incredible opportunity for me.” Nigel, who is currently studying for a Certificate in Culinary Skills, will use the bursary to progress to the National Chef De Partie Apprenticeship Programme at CIT, which will set him on a fast-track to becoming a fully qualified chef with access to the best kitchens in the country.

He is an obviously determined young man. His studies currently take up two full days each week and then he works around that commitment. Does he get a chance to relax? He does indeed. He loves watching Rugby and American football. For the past seven or eight years, he has been playing Five-a-Side football out in Ballincollig, enjoying the exercise and the craic. Music is another big interest of his and indeed he “used to play for a few bands”.

He has been strong on getting local producers recognised and his thoughts on the subject were taken on board by Conrad Howard of Market Lane who will be including profiles on their menu in the coming weeks, introducing their diners to the fantastic, passionate producers that supply the restaurant with their produce.

Nigel’s interest in local producers was reinforced by Avril Allshire of Rosscarbery Recipes and Caherbeg Pork when she spoke to his group at CIT. “Avril gave us a great talk and very unselfishly promoted other producers as well.”

He is all for diversity and balance in diet. “We should eat better quality meat, but less of it, and definitely eat more fish and vegetables.

Has he a favourite chef? “Marco Pierre White, a working class man who shot for the stars. Also the Roux brothers, Albert and Michel, French-born restaurateurs and chefs in Britain. And I’m sure there are more!”

Nigel is a patient fellow. It has taken him a long while to get to this point but he is not jumping too far ahead. “Of course, it’s in the back of every chef’s mind to have his or her own kitchen and to run the show to his or her own standards. But I’m only at stage one. You’ve got to serve your time, got to learn, then find your niche.”