If a good start is half the battle, then Cobh’s new café Seasalt is already winning. Jacqui O’Dea’s Casement Square daytime restaurant (9.00 to 5.00) has hit the ground running. And you’d better get a move on too as they are popular and busy. We were there on a bitterly cold and showery midweek day and it was packed at lunchtime, with some potential customers turned away.

So what’s it all about? It’s about good fresh food, sourced locally and cooked well by the Ballymaloe trained chef Jacqui. Amazingly, for the first time ever, a Cobh chef is offering the smoked salmon of Frank Hederman even though he is just out the road and has been supplying some of the world’s best outlets for 38 years! You may have the salmon in the morning and at midday, as Seasalt offer tempting Brunch and Lunch menus.

And while Seasalt have lots of salads and veg on the menus, they have the Full Irish too, well at least the Rosscarbery Irish: two sausages, rashers, black pudding, sautéed spuds, roast tomato, two organic fried eggs and sourdough toast! Impressive.

Having just escaped a heavy shower, we settled in for lunch and thought we’d warm up with their Mushroom Soup. It came in a colourful pot but I didn’t bother with a photo as the soup was so dark, not at all photogenic! But don’t judge a book by its cover! This was a splendid thick soup, a power-packed shot across the bows of the cold weather and probably the very best mushroom soup that we’ve ever tasted.

The menu changes weekly here, partly so regulars won’t get bored! I had been looking at the Cork Reuben as my main course. This consists of McCarthy’s Pastrami, house sauerkraut, pickles, with Edam cheese on Pana sourdough.

In the end though I picked the Hederman Smoked Salmon that came with a salad, plus a helping of apple and fennel, all on a base of their own very tasty brown bread. Very happy with that, the crunch of the bread, the apple and the smoothness and precision of the smoked fish, just perfect.

CL meanwhile was enjoying her Tart of the Day with two salads, a puff pastry base loaded with roasted vegetables (aubergine and courgette) and much the same salads that I had. Another good mix of textures and flavours, not to mention the attractive colours. These were both specials. Aside from the Pastrami, they also had Croque Madame, a Cauliflower Dahl, and a Macroom Halloumi Salad to choose from. 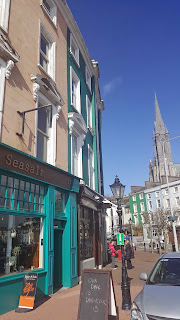 Would we have dessert? Hummed and hawed a bit but once we took a closer look at the counter, all resistance faded. And, along with a couple of cups of the Badger and Dodo coffee, we enjoyed an Orange and Polenta Cake and also a Lemon Slice.

The sun has been shining while we ate and for a few minutes after we left. But soon we had to pick up “speed” as another shower coming from the city threatened. Just made it back to the Five Foot Walk car park.