I think many of the customers at last week’s superb Rizzardi wine dinner in Courtmacsherry’s Lifeboat Inn had Amarone on their minds. And when the 3CRU 2013 came, it didn’t disappoint. It was introduced, like all the previous wines, by Giuseppe Rizzardi and he gave us a few tips. 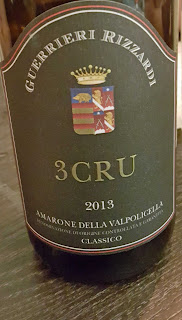 “Don’t decant,” he said. “By all means, open it a few hours in advance but don’t decant! Also, don’t serve it too warm. It is our most prestigious wine. Amarone is not a grape, not a region, it is a method, a process. The grapes are picked and then put into boxes that hold 4 to 5 kgs. Some 15,000 to 18,000 boxes are left to dry out in a large room in a method known as appassimento. It takes 2 to 3 months and you end up with less fruit but with more concentrated tannins, more colour, more sugar. It then spends two years in barrel.”

The Rizzardi version, a 2013, was excellent and fantastic match with the Beef Cheek and the pairing was heartily endorsed by the winemaker. But Giuseppe told us that not all Amarones are the same. “Too often is it very sweet and that sweetness covers the lack of other qualities.”

Giuseppe is quite familiar with Ireland and did a few summer jobs here in the 1990s and of course he's a regular visitor now to O'Brien's Wine, his distributors here. On arrival the guests were treated to a glass of Rizzardi Prosecco, the famous sparkling wine made from the Glera grape. “This one is smooth and dry, with a little bit bit of character.” He told us they use it as a base for cocktails, “especially Bellini.”

The Italian enjoyed the food and was intrigued by the local Mozzarella in our starter. Pinot Grigio is quite a well-known Italian white and we started our meal with that. “It is not barrel aged, is quite light, made with fruit from the region of Soave. It’s ideal as an aperitif and will go well with soups.” And it went very well indeed with our delicious opener.

Indeed Giuseppe, like the rest of us, was every impressed with the starer, surprised to hear that the cheese was locally sourced “very interesting texture, very impressed”. He told us that a lot of Soave, our next wine, is made but much of it is just for everyday. Theirs comes from a beautiful fortified village in the Classico area and the Gargenega vines are grown on volcanic soil. “Again it is unoaked, a little bit of Chardonnay is blended in.” And he advised against serving this too cold. “You get more flavour as the temperature goes up.” It was paired with the scallops, local and absolutely superb. 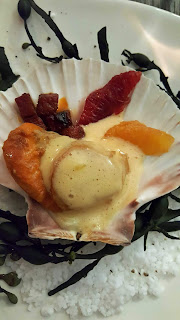 So don’t serve the Amarone too warm, don’t serve the Soave too cool. What next? Well a red wine with fish! And the Roast Monkfish paired with the 2013 Ripasso de Valpolicella was a match made in a Courtmacsherry heaven. Again, Ripasso is a method with the grapes “refermented on the skins of the Amarone and then 12 months in big barrels”. “This is a red wine that can be poured cool, at about 14 degrees,” he advised. “Great freshness and acidity and it provides a link between simple Valpolicella and Amarone.”

And it did indeed go very well with that splendid Monkfish dish. Front of house here is David O’Halloran and he had been giving us some extra details on the dishes. He told us it was a “purposeful decision” to pair the Ripasso and the Monkfish “to show that fish and red wine will go together”. Referring to the Amarone he said that here, in a reversal of the norm, they picked the food to go with the wine, not the other way round. Chef Martin Buckley got out later on and thanked Giuseppe, saying “it was special to have him here tonight”.

And there was another surprise when it came to the dessert, an excellent chocolate offering as the wine was, believe it or not, a Merlot, the 2016 Clos Roareti. An unusual choice. And an unusual project, according to Giuseppe, that began in 1999 in a region near Verona where there was no Merlot. But they succeeded and produced their first bottles in 2006. “Now (we were drinking the 2016) the vines have matured, there is a good richness and concentration but not too much. It has spent 12 months in barrel and this 2016 is still a baby. Production is limited and the bottles are individually numbered.” 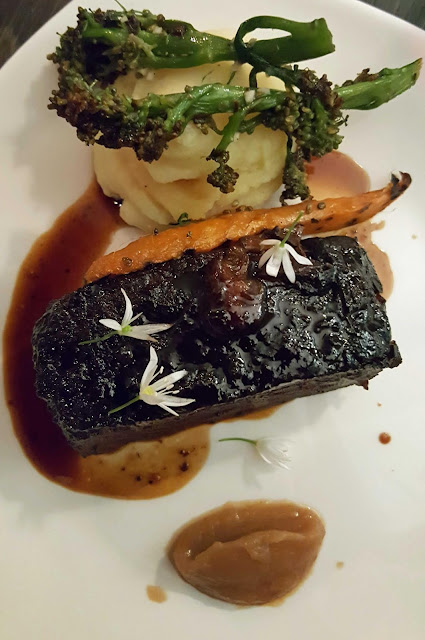 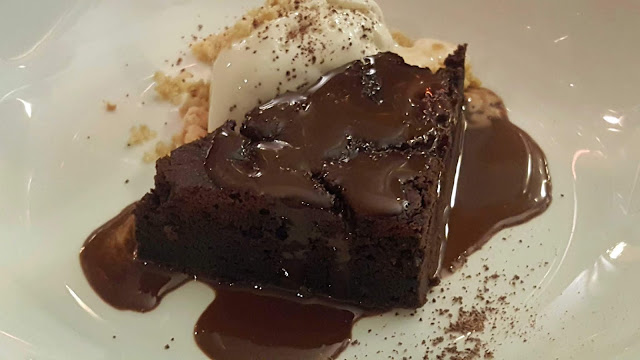