Quelle surprise! In Finns’ Table Kinsale recently, we were delighted to have the opportunity, totally unexpected, to talk with Olivier of Joseph Mellot wines from Sancerre. 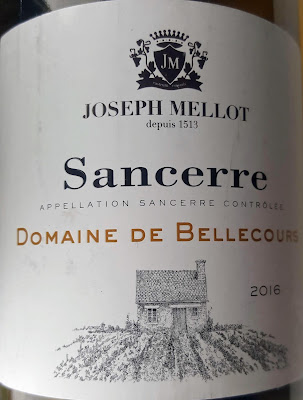 It was late in the evening when Olivier arrived but he was as enthusiastic as if it were a sunny morning by the banks of famous Loire.

“It’s a very long story,” he said, referring to the family’s history in the area. It began in 1513! In the 17th century, the family obviously knew their wine well enough for César Mellot to be appointed sommelier to Louis XIV, this paving the rue for a long dynasty of passionate winemakers. Sancerre by the way, is as close to Paris as it is to Tours and then too the kings regularly visited the chateaux on the Loire.

In the 20th century, Alphonse Mellot, is the first winemaker of Sancerre to exhibit his wines at the Foire de Paris and to win several medals in wine and culinary events. He then opened a warehouse in the Halle aux vins of Bercy to develop his sales in the capital.

Nowadays, Joseph Mellot wines are sold in over 40 countries, and distributed here in Ireland by Longueville Wines. And Longueville was represented in Finns Table by none other than Eoghan O’Hea who I hadn’t set eyes on since his Tennents days. 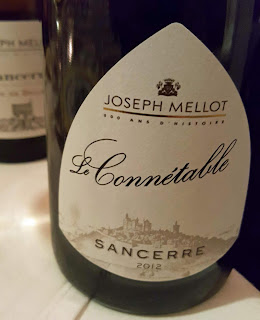 The soil of course goes back even further, tens of millions of years. “The ocean has been here twice,” said Olivier. Flint dominates the soil now and it and Sauvignon Blanc get on very well together. “It is a well draining soil, gives lots of aromatics and minerality. Last but not least, the sun warms the stones and if you walk in the vines at 11.00pm, you’ll find it 2-4 degrees warmer then elsewhere as the warm stones return the heat to the vines. The night-time warmth encourages the grapes to ripen, an earlier harvest. Amazing.”

The Mellot vineyard is on hills in Sancerre, at 450 metres altitude, above the River Loire which still has some 500 kms to travel before it reaches the Atlantic. Wine-Searcher says Sancerre is typically less "obvious" than the most famous New World styles of Sauvignon Blanc; less grassy than those from Marlborough and less overtly citrussy than those from Chile. Once upon a time, Sancerre made mostly red wines but now their Pinot Noir accounts for just about 20% of wine. But that may change again with global warming!

Julie Finn had been gently and generously introducing us to the wines before Olivier’s arrival. The red was Le Connétable, Cuvée Prestige, a red Sancerre of character! The fruit is raised on those hillsides rich in flint. It is matured in oak barrel for one year, local French oak that is, and then one year in bottle before release. 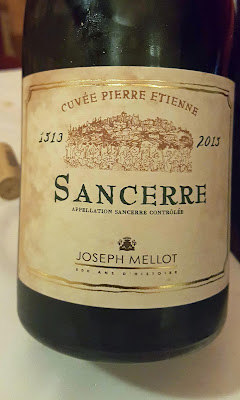 It boasts an aromatic persistence with notes of blackberry and cherry.  Matched perfectly my starter of beef brisket and CL’s main course of lamb.

We also enjoyed the Domaine de Bellecours 2016, a delicious Sauvignon Blanc with a pale gold colour and aromas of tropical fruit. Palate shows elegant balance of freshness and fruit. Superb with the restaurant’s Oysterhaven mussels starter and later with the Seafood Bourride (Provencal fish stew).

Cuvée Pierre Etienne 2015 is another Sauvignon Blanc, smooth and elegant and quite a treat. Beautiful yellow/golden colour, sign of the ageing in barrel which has also tamed the strong mineral character of the younger wines. Generous and intense, with a nice aromatic persistence.

This cuvée was created in tribute to the founder of the Mellot dynasty, Pierre Etienne, and his descendants. It is vinified only in the best vintages and just 3,000 bottles are produced. The front and neck labels are reproductions from the 1930s. We were really privileged to sample this on the night! A mega merci to Julie and John!