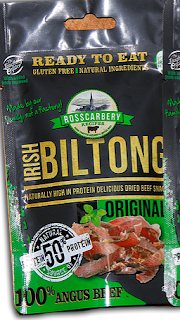 You’re a person on the go. Playing stamina sapping games. Surfing. Climbing. Hill Climbing. Farming. Maybe you’re just hovering the stairs carpet. And you need a quick snack to boost those energy levels. Well, our latest Taste of the Week might interest you. The Irish Biltong by Rosscarbery Recipes is naturally high in protein, a great on the go snack made from 100% Angus beef. Just sea salt, organic raw cane sugar, toasted coriander, ground black pepper, onion powder, garlic powder, and dried Irish seaweed have been added to the beef.

The Allshires, the family behind Rosscarbery and Caherbeg Pork, are well known in West Cork and beyond and it was one of the younger members, son Maurice, who developed this product. Initially is was for himself.

An active young man, he was unimpressed with the snacks available, certainly with those long lists of strange ingredients. “I needed something tasty, something that I could rely on with an ingredient list that a toddler could read.” And so he developed Rosscarbery Biltong around his own lifestyle. It took a while though but now it is widely available.

The beef has been cured and air dried and cut into small strips and the product comes ready to eat in a pocketable pack. Just put a piece on your tongue and allow the juices in your mouth to work their magic. The beef softens and you can chew away to your heart’s content. Another  strip or two and you’re ready to move that mountain, well climb that hill!