See Where Your Food Comes From With West Cork Farm Tours


See Where Your Food Comes From
With West Cork Farm Tours

Here’s how to get a two week old calf to suck your fingers.
Extend your hand and keep it out there. Keep it steady. No sudden moves. Be sure and have your palm facing upwards - they don’t want any backhanders! Be patient and soon enough the calf will come and suck (probably with more force than you might expect).

Just one of the experiences from our morning West Cork Farm Tour on Denis O’Donovan’s dairy farm between Rosscarbery and Glandore. “Dairy’s the only game in town,” according to Denis and, since 2015, the only type of farming that he conducts. The 150 cows in the herd get the best of care and attention from Denis, his wife Collette (great with the calves!) and son Eoghan (who is attending secondary school). Denis’s father, nominally retired, is also a big help especially when the family need a break.
They greeted our group when we arrived on the mini-bus and soon we were sitting at the table with a spread of scones, Kerrygold butter, Dubliner cheese, and their very own milk (very delicious!). Collette and Eoghan joined us for a chat and indeed for the tour.

Denis was keen to stress that Ireland is one of the few countries in the world where milk is produced from grass. “Ninety per cent of the world’s milk comes from cows fed on grain,” he told us, stressing that the grass based method was much more environmentally friendly. 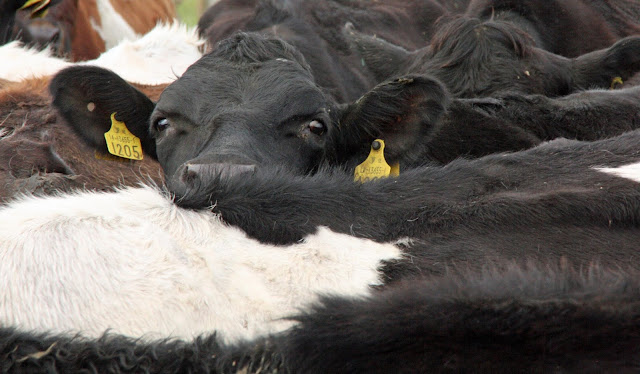 There are four farmer owned co-ops in the area and they also have the Carbery factory. This is where the O’Donovan’s milk goes before ending up in products such as that Kerrygold and Dubliner and also milk powder (especially for the big baby food companies).

It seems to me that the perfectly laid out farm would be one of twenty one fields, ten on each side and one at the top of the farm road. Why? Well, the grass cycle is 21 days. Denis: “We have the perfect climate for grass, though the drought (like that of 2018, thankfully a rare occurrence, and severe cold can upset that). This spring has been very kind so far and we have loads of grass.” And where there’s a surplus of grass, it can be harvested as silage and retained for the two and a bit winter months when the cattle are kept indoors.

Good farm roads are essential and theirs are excellent as we’d find out later, “better than some public roads”. Other essential items are large water troughs for each field or paddock,  piping to get the water out to the fields, electric fencing to control the strips of grass being grazed. Amazing how the cows will stick their heads out under those wires to get a nice mouthful of grass but are very careful not to touch them.

So then it was time for us to get into our trailer and Denis onto the tractor. The trailer by the way is adapted for passengers and you get a great view. Midway through, we walked a bit, getting nearer the West Cork coast and enjoying marvellous views down to Glandore harbour and its rocks and islands and, over to the east, Galley Head and its lighthouse.

At this point too, Eoghan gave us a local history lesson as he pointed out the impressive ruin of Coppinger’s Court in the near distance. Must have been much more impressive when it was built in the 17th century with 365 windows, 52 rooms and 12 chimneys. Sir Walter Coppinger intended to build a city around it but his ambition bankrupted him.

He was hauled off to court, leaving instructions with his staff that, if he wasn't back by supper, he’d have had lost his case, and they were to burn the place down. He won the case though and repaired to the nearest tavern to celebrate. He forgot all about his instruction until seeing the glow in the sky from the flames as he arrived home.

Back in the milking parlour, we heard that Denis and Colette are up at 5.45am every morning for ten months of the year. Straight out to do the morning milking; the afternoon milking is around the 4.30pm mark. No escaping those two daily sessions if you’re a dairy farmer.

The herd is a Jersey/Friesian cross, the Jersey used for its higher fat and protein in the milk. Each cow produces about 5,500 litres of milk each year but nowadays farmers such as Denis tend to talk about milk solids rather than the amount of liquid. Their paycheque is based on the solids and hence the importance of the Jersey (who is also a very “efficient cow”). 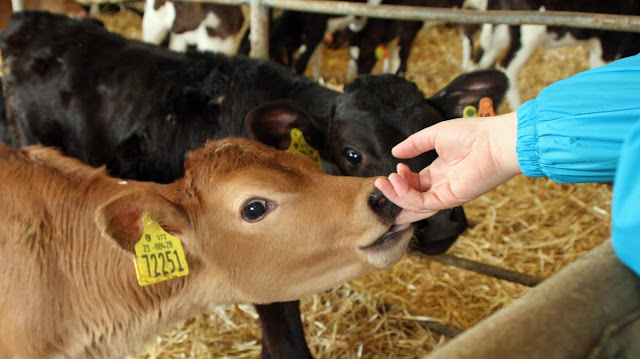 As we met the herd out on the field, and they came over to check us out, Denis revealed that he does all his own AI (artificial insemination). “Most of the semen we use comes from New Zealand but we (Ireland) will soon have our own bank.”

He pointed out the tags that have all the data (birth date, mother, father etc.). “The department will know exactly her history. Full traceability is all important. There is no traceability in many countries.”

Back at the buildings and right next to the milking facility, we met the current “crop” of calves, just a few weeks old and just as curious (if a little bit more nervous) than their mothers. All the calves, by the way,  are born in the springtime, all by arrangement (thanks to AI and good planning). It makes the whole operation that bit more efficient and means that the family can plan their year a bit better better, especially that well earned break! 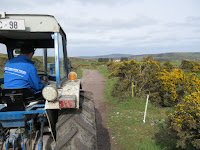 There are five farms participating in the Tours programme, all a little bit different. They can do days tours, bespoke tours, specialist tours. We certainly enjoyed our one and you can get most of the info you want from the contacts below, especially the website. Very Highly Recommended. Local hotels, such the Celtic Ross, can also be of help if you want to do a tour and indeed big thanks to Neil Grant of the Celtic Ross who arranged for us to go on this one. 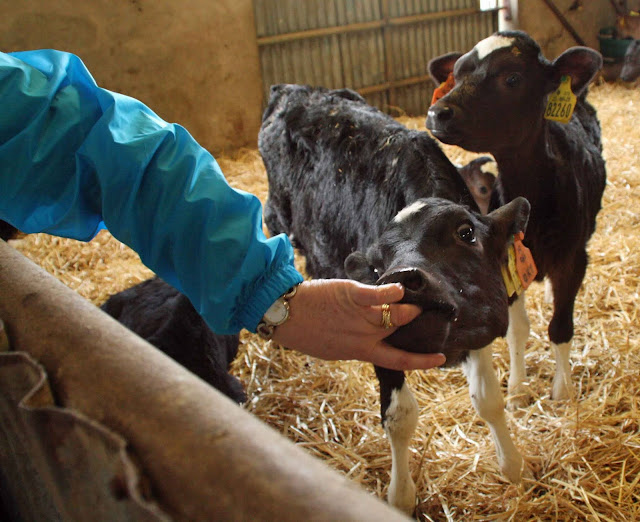