In a remote restaurant in Sweden, Chef Magnus Nilsson saws a bone lengthways as his customers look on. The marrow is scooped out and mixed with other ingredients, a bowl for each guest. Fäviken* is the name of the restaurant and it is in the world’s top 50. No such theatre at ORSO on Monday evening when the Market Lane young chefs presented their latest Chef Sessions, the first one open to the public, but we did have bone marrow, lambs hearts, cauliflower stalks, tripe, pigs tail, spent grain brioche, pig skin pasta, even a stout wort fudge.

The focus here in these sessions is very much on using the previously unused, rarer cuts of meat, little known fish, and on avoiding food waste. But the focus, and the challenge, is sharpened by the imperative to cook and present the unusual to a very high standard. The confident crew did very well indeed and their nine course meal took us beyond the familiar comfort zone and was a delicious delight of taste and imagination.

Served with some excellent beer (their own) and organic wines, this turned out to be a thought provoking nine courses of excellent dining. Keep an eye on the Market Lane and Chef Sessions social media accounts for future events (which may have a different theme but with the same talent behind this “evolving, exciting eating”).

Last Monday's theme was underlined by the welcome drink, Blood Orange Fizz, a delicious cocktail of Beara Gin infused with waste from segmenting blood oranges and topped with Prosecco. Bread and butter was served, the brioche made from spent grain, a by-product of their brewing process. The delicious cultured butter is a fermented butter. Then smoked Cods Roe “criminally underused in our opinion” was served as a mousse on a squid ink cracker. At this stage we were enjoying a bottle of their Jawbone cloudy beer, a superb drink with the food. 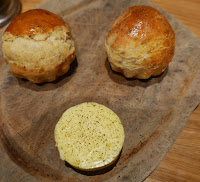 Then a combination of classic Cork and classic France: Tripe and gribiche. The tripe was slowly braised, pressed, cooled and cut unto rings before dusting with flour and deep-frying. Looking at it, you’d have thought you had calamari on the plate. Then came the bone marrow, served and roasted in the bone and topped with an oil based sauce, flavoured with parsley capers and lemon. Another excellent pairing.

Next up was the Coffee Grounds Baked Beetroot, Hive Mind Honey, ricotta, and malt cracker. Hadn't heard of Hive Mind before but they are a County Cork company, a kind of co-op really, that for a fee will look after hives for you at their location and give you the honey at the end of the season; more info here.  Market Lane have invested in hives and the honey here came from a fennel meadow. The ricotta was made using leftover buttermilk from making the cultured butter and the malt cracker was made from malt from the Elbow Lane micro brewery. And, by the way, all these ingredients came together very well indeed.

The following dish, Pigs Tail and Garlic broth, was also full of flavour. The tails, with the inner bone removed, had been slowly braised, pressed and pan-fried while the broth was made from the skins of roasted garlic which is often wasted. I thoroughly enjoyed that one.

Another interesting combination followed: Cauliflower stalks, parmesan rind custard, and smoked ham. The stalks had been "confited" in duck fat and the cheese sauce garnished with ham crumb. Time for a palate refresher then and that was a Cucumber sorbet, pickled watermelon rind. Apparently, there is a fair bit of waste with cucumbers and here the outer skin and inner seeds were used to good effect.

Pig skin “pasta” with clams got us going again. Had really been looking forward to the next one and the Lambs heart, potato fondant, kale and lamb demi glace didn’t disappoint. Far from it.

Burnt toast and “barmalade” parfait Barry’s Tea ganache was the tasty dessert. Citrus fruit waste from the bar was used to make the “barmalade” and the white chocolate ganache came from used Barry’s Tea bags. “Using used tea bags you get a more caramel flavour and lose the harsh tannin flavour from the tea”. All a bit complicated to the outsider but no bother at all in cleaning that plate!

We had, a long time back, started on the wines, both by Le Caveau. The white was a Judith Beck Weissburgunder (Pinot Blanc) from Austria while the red was Inspiration by Domaine de la Ville Rouge in Croze-Hermitage and both were excellent.
The coffee then appeared along with a selection of “petit fours”. More invention here. The coffee and walnut was filled with a coffee grounds infused custard. The Beetroot aqua fava Macaron saw the egg white in the recipe replaced by water from Chick pea tins. My favourite was perhaps the Angel Stout wort Fudge. Wort is a by-product of the brewing process, a sweet and malty one.

Just another surprise on the night. At the start, Conrad Howard of the Market Lane group had promised us “a treat” even if many of the ingredients were by-products, discards, or waste. He was spot-on. So well done to all involved, to Lorenzo Luzzani, Chef de Partie in Market Lane, Janos Schmidt, Chef de Partie in the Castle Cafe and Liam Flynn, grill chef in Market Lane and to young Aishling Moore sous chef at Elbow Lane, who once again headed up the team. They also benefited from the regular input of the Group's executive chef and Elbow Lane owner, Stephen Kehoe. 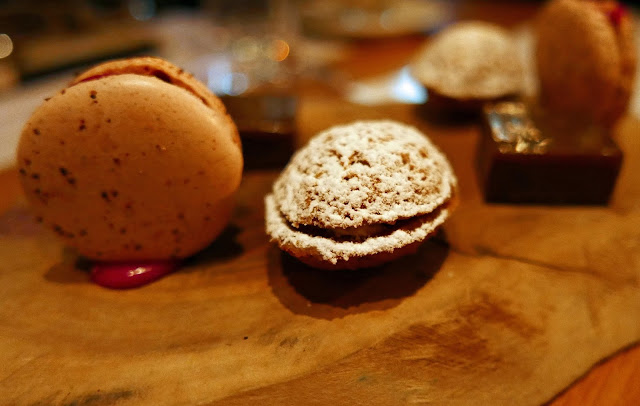 *  The 'Chef Sessions’ are the result of an intense collaboration among the young chefs working in the Market Lane Group’s four restaurants (Market Lane, Elbow Lane, Castle Cafe Cork & ORSO Kitchen & Bar) who, over a six week period, create a menu to present on the night. CorkBilly was a guest at ORSO.

* For more on the story of this remarkable restaurant and indeed for behind the scenes accounts of restaurants past and present from around the world, do try and get your hands on In The Restaurant (Society in Four Courses) by Christoph Ribbat (2017). I got mine in the local library.