Braupakt Hefeweissbier. A Flavoursome Duet with Weihenstephaner and Sierra Nevada. 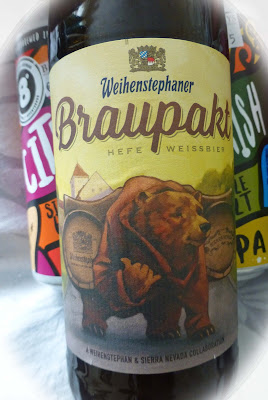 Those behind this collaboration between Weihenstephaner (the world’s oldest brewery, 1040) and Sierra Nevada (of much more recent vintage, 1979) have noted a trend away from ultra-bitter beers towards a more aromatic hoppy offering. Scott Jennings, head brewmaster at Sierra Nevada and Weihenstephan’s head brewmaster, Tobias Zollo, have produced this “perfect match” between the revered German hops and the newer American ones.

The name has nothing to do with the cool bear (I first thought it was a St Bernard!) on the front label. Braupakt (literally translated; Brewery Pact) merges “old world” purity standards and brewing methodologies with “new world” innovation and hop flavours. The collaborators say the name also plays on America’s “bro pact”.

This naturally cloudy amber Hefeweizen has a lasting foamy head. Peach, apricot and citrus on the nose, hints of clove too. The pleasant mix of aromas continue in the mouth, banana touches here too and a refreshing grapefruit from the American hops plus sweetish notes from the caramel malt. The beer is balanced and has a moderate tartness that melds into a harmonious mouthfeel on the finish. Very drinkable indeed.

An interesting note on Sierra Nevada. When the brewery was founded in 1979 it was the 42nd in the USA. Today, there are close to five and a half thousand. Just shows how far craft beer has come in a relatively short time. Speaking of “short time” this is a limited edition! Well worth a try.