Mathews & McCan Take A Walk on the Wine Side


Mathews & McCan Take A Walk on the Wine Side

Colm McCan talked the talk and walked the walk as he guided a group of Munster Wine & Dine members around the wine history of Cork City last Saturday. The meeting point was St Peter’s Church in the ancient heart of the city and as we sipped the first of our wines, the Elgin Ridge 282 Sauvignon Blanc from South Africa, Colm filled us in on the huge appetite for wine that our ancestors, especially our mayors, including one called Richard Wine (1273), had for wine. Don't think though that they'd have enjoyed the delicious Ardsallagh Ash Pyramid Goats Cheese that we sampled with the first wine.

Marian Smith, from Ballyjamesduff, is co-owner of Elgin Ridge and all the wines that we’d taste at the various stops would have an Irish connection, the Irish loosely interpreted in some cases!

Next stop was almost next door at Bradley’s where Michael proudly showed us the amazing gate (really a map in metal of the old city) that his brother mounted on one of many old lanes off North Main Street. Many of the lanes are gone or are blocked up but their names can be seen on plaques built into the pavement. Woodford Bourne is a name linked with the wine trade so it was appropriate that we'd make a stop there.

Then it was on to the Crawford Art Gallery. The older part of this building was once the Custom House and ships, often with wine onboard, would dock here in Emmet Place, now a busy square, and the captains would go in to pay their duty.

In the gallery itself, we stopped in front of the large portrait of Hugh Lawton, mayor of Cork in 1776 and a direct ancestor of Pierre Lawton, the influential Bordeaux based negociant. In a cabinet we saw Penrose glassware. Cork glass pre-dated Waterford crystal and was made from 1783 onwards.

The city also produced some of the earliest wine writers, including the famous Maurice Healy. As we moved to our next stop, we passed the GPO which stands on what once was Lawton’s Quay. You can guess what cargoes came in here!

Kevin Parsons has spent a lifetime in wine and he (and his wife Mary) was a guest on the walk and came up with some good stories. In Jacques, as we warmed up with a delicious tagine and a wine (Zouina’s Volubilia Rouge, made in Morocco by a French company with an Irish connection), Kevin told us about famous winemakers he had done business with, including the Mahoneys of the Napa Valley, John Horgan of Western Australia, even the then nascent Nyetimber of England. He is well known for his posters of the Wine Geese and used one of a few mounted in Jacques to illustrate. You may check those posters whenever you’re in the Oliver Plunket Street venue.

Kevin and the rest of us were looking forward to our next arranged halt, at the Old Bond. We did get into the area. Lots of keys available but those to the old vaults couldn’t be found and we had to make do with looking at the exterior, perhaps for the final time, as there are plans afoot to develop this point of land, the final point at the eastern end of the island city. Kevin had been a daily visitor here for decades.

So back to the warmth of the top wine venue in Cork, L’Atitude 51. Beverley had been with us all day, helping Colm with the commentaries, and now she was our host, greeting us with a glass of 1701 Franciacorta. The Irish connection here is Rhona Cullinane, a Clonakilty lady who works with this family owned vineyard between Lake Garda and Verona. 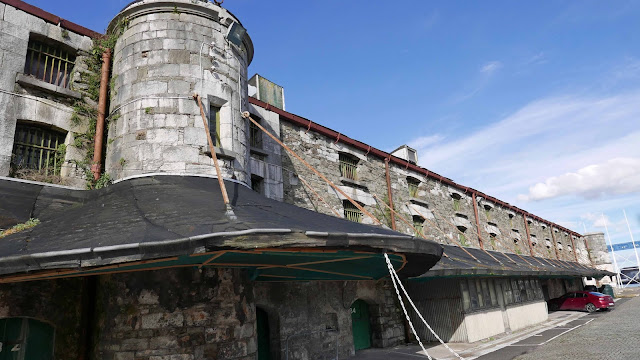 Wexford man Pat Neville was described as one of “modern day wine geese” as we sipped his Domaine Aonghusa Bentouly 2014. All the while, there were contributions of mainly Irish interest coming from Colm, Beverley and Kevin.

And then it was time for the finalé: Le Cèdre Malbec vintage 2012. And very nice too, its sweetness a lovely match with the chocolate covered figs from the L’Atitude kitchen.
And who better to tell us about the wine than Jules, the son of the vignerons, who just happens to be doing work experience at L’Atitude. “It is a Vin doux naturel, raised by organic methods, with an abv of 16%.” When it comes to wine, Mathews and McCan always find an Irish connection! Salut. Cheers. Slainte.