Eight Degrees Can Three Of Their Range


Eight Degrees Can Three Of Their Range 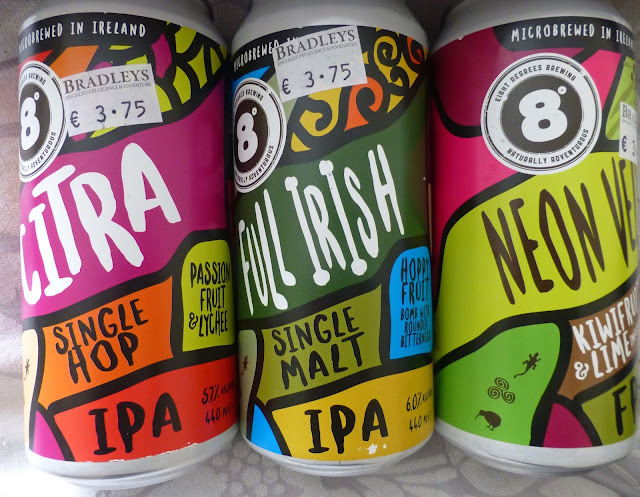 Eight Degrees are the latest brewery to can their beers. The Mitchelstown based firm launched three cans this March, two with established favourites and one with a newcomer. Very colourful cans they are too, joining a myriad of other colourful cans on the shelves. Canfusion for me but luckily Michael Creedon in Bradley’s always knows where the one you want is situated.

Brewery co-owner Scott Baigent said: “We've definitely seen an increased demand for cans in recent times and, despite our ongoing love for the 330ml bottle, are releasing three of our beers in 440ml cans.”

This is the newcomer, a limited edition beer, and only available in cans or on draught. This cloudy beer  is a golden colour. Aromas are bright hoppy. Very pleasant smooth intro. Infused with kiwi and lime and more flavour from the Citrus and Amarillo hops, all before a dry hopping with New Zealand hops Pacific Jade and Motueka. A lovely fruity ale, “hazy, silky and fruity” as they say themselves and with a dry finish.

Lots of food pairing suggestions on the Eight Degrees site but the one I fancy is: “a chunk of good Irish farmhouse cheddar will play off the fruit flavours in both elements of the pairing”.

Citra Single Hop IPA, 5.7% abv, 62 IBUs
Tropical fruit aromas and flavours on display from the get-go here with this pale orange coloured beer. Hoppy notes too in the aromas. The Citra hop holds up well on this solo run, its tropical flavours scoring all the way through, the malt also playing its part in quite a flavoursome drop indeed, fruity and juicy and a good finish as well.

Think I'd like to try that with the suggested “grilled spicy fresh Gubbeen chorizo sausages”.

Full Irish Single Malt IPA 6.0%, 65 IBUs
This excellent beer is well known at this stage, having gathered award after award following its 2014 launch. They describe this as “a hop bomb” and so it is but the bitterness in this pale gold drink is rounded. No shortage of hops in the aromas with citrus and floral notes in there too. Local barley is the malt hero here but the hops (Ahtanum, Centennial, Citra, Amarillo) share the limelight as this clean tasting well-balanced IPA makes its journey across the palate before you enjoy that rounded bitterness at the finalé. Quite a few food suggestions again; I’m inclined to go for the smoked duck, especially if it's Ummera.

So there you go. An excellent way to pass an evening watching Champions League on the telly. Just as well, Barca stopped at three against Chelsea!

Stockists: Eight Degrees beers are widely available in Ireland. Also in Italy, France and the Benelux countries. See stockists here. I got my three (for a tenner) at Bradley's Cork.