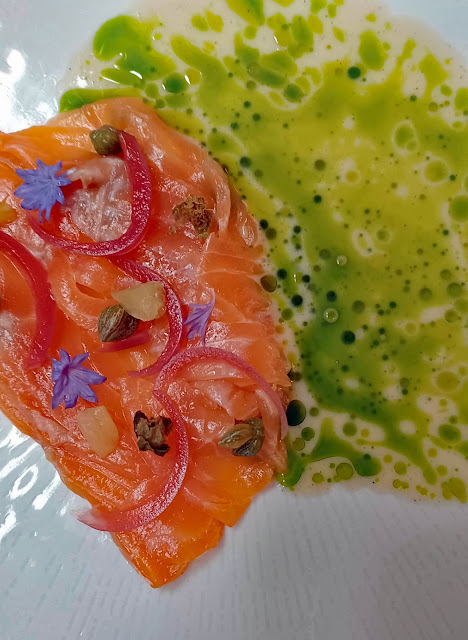 Greenes Kitchen Skilfully Manage The Bounties Of The Seasons

It’s early on a September Friday evening and the courtyard between Greenes Restaurant and her now grown-up sister Cask is abuzz with diners. We make our way through to the waterfall and turn right into the restaurant and there’s a warm welcome from sommelier Frank* who combine(s)d his wine duties with restaurant manager.

We were in early, early enough for their excellent value Early Bird (5-6pm). Other choices also available, including Prix Fixe, A La Carte and Tasting Menu. After a fair bit of “reading” and double checking, we settle on the Prix Fixe (55 euro a head) and we will not be at all disappointed. Au contraire!

The excellence here begins in the fields, the seas and the forests, with farmers, growers, foragers and fishermen, in Cork and in the region generally. It is meticulously maintained and cooked and presented by the team in Greene’s kitchen. And it is served with accuracy and smiles by the front of house team.

We’ve made our choices and our wines have been brought to the table. A glass of Grüner Veltliner (Steiniger, Kamptal, Austria), light, fruity and with crisp acidity, for her; a glass of Lingenfelder Fox Label (Pfalz, Germany), deliciously juicy with ripe fruits by the German family for me. Both glasses are 175ml by the way, as large as you’ll get anywhere in Ireland. 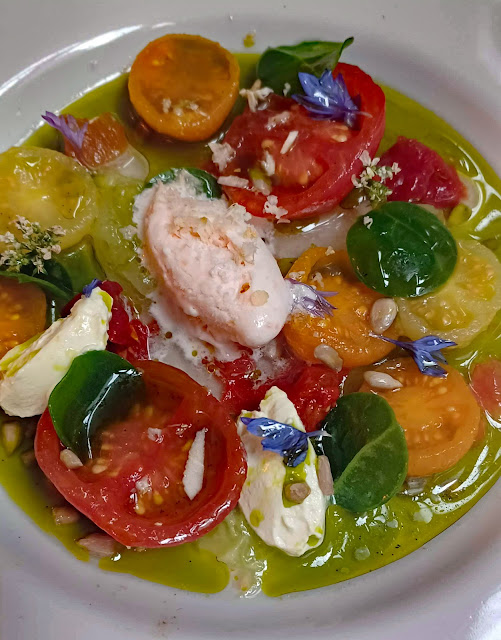 Then there’s a surprise unlisted set of snacks, salmon sushi style, a creamy apple-topped soup and a pork belly croquette. Super bites and signs of the goodness to come. Delicious breads on the table also. 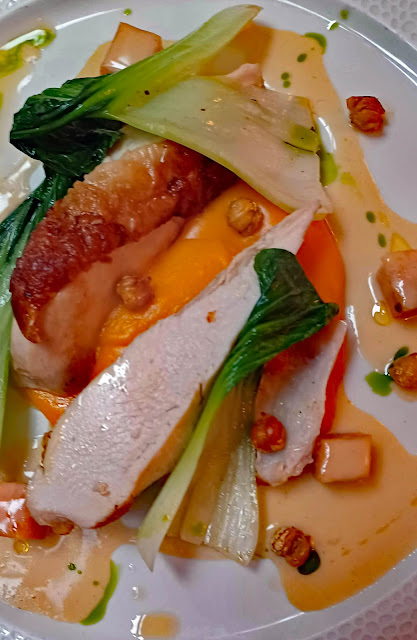 I started with a colourful and wonderful plate of Glenmar Salmon Gravlax, Toasted Almond Milk, Parsley, Pickled Red Onion, Crispy Capers. The salmon and the toothsome red onion were the main duo and the milky sauce helped it all on its delightful way. 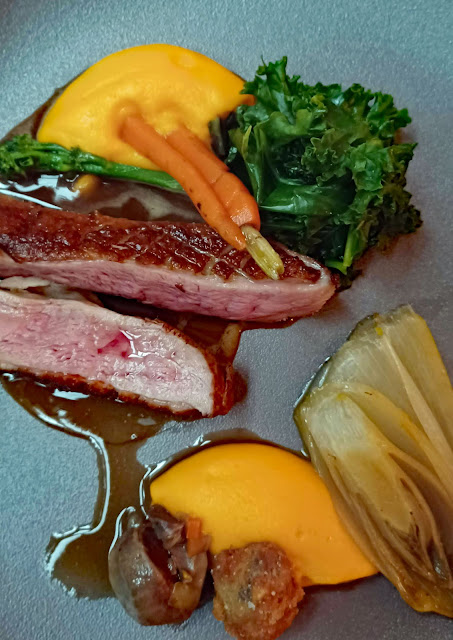 My second choice (from five) would have been the Heirloom Tomato, with Basil Yogurt, Grapefruit, Vanilla, Sunflower Seeds, Tomato Water and CL loved it. There was a bit of sharing going on, there always is. I enjoyed my bits no end, as did she. Next time, we’ll have to swap courses!

Then it was on to Market Chicken (from Twomey’s of Macroom) and, as always here, the breast meat was soft, tender, succulent, moreish! Especially with the Coconut and Lemon Grass, Sweet potato, Bok Choi, Crispy Chickpeas. Again, we had five choices and my pick was a favourite, the Skeaghanore Duck Breast (medium rare), with Carrot, Braised Endives, and Jus and more. Tasty and toothsome, this consistently satisfying dish is a must if you like duck. By the way, all main courses come with a side of vegetables and potatoes to share. Needless to say, these were spot-on.

Desserts can often be a letdown in restaurants. Quite often the lemon posset is no great shakes. But it is a different story, different class, here and the Lemon Posset and Raspberries, Oatmeal Lace Biscuit, Raspberry Sorbet is highly recommended by CL. And I can honestly give a major thumbs up to my Dark Chocolate and Hazelnuts Torte, Praline Caramel, Barley Ice Cream.

* Frank Schiltcamp, who told me last week, publicly announced on Twitter on Sunday last that he was leaving:
After 7 amazing years, today was my last day in
@Greenescork
It's been an absolute pleasure working with such talented people throughout the years but now it's time for a little sabbatical. Thank you guys, you've been nothing short of legendary!
Best of luck Frank and enjoy!!! And best wishes also to Head Chef Veronica and to new manager Noel.