A hazy orange colour here with a generous foamy head that soon settles and sinks. Aromas are modest, citrusy with a touch of pine. It certainly loses its reserve on the palate, full of deep and lasting flavours (citrus, more exotic stuff) all on a hoppy backbone and no shortage of malt either. The finish is also impressive, the dry-hopping having helped in the balance.

The base malts used are Irish-grown, from Loughran’s Family Malt. The American hops include the pretty well-known trio of Centennial, Citra and Idaho 7.

Decent info on the label where the main visual is based on a Ha’Penny Bridge painting by Sarah Magee. When built in 1816, it was the first pedestrian bridge to cross the Liffey. Post Card beers are brewed in Farmington’s Brewery (Kildare).

Post Card Brewing Company is "a small but adventurous craft brewery. We brew our beers to both tempt the average beer-drinker and enthrall the enthusiast”.

They point out that Ha'Penny Bridge Pale Ale is not so pale “but an old school style” that will remind you of your first Pale ale all those years ago”. 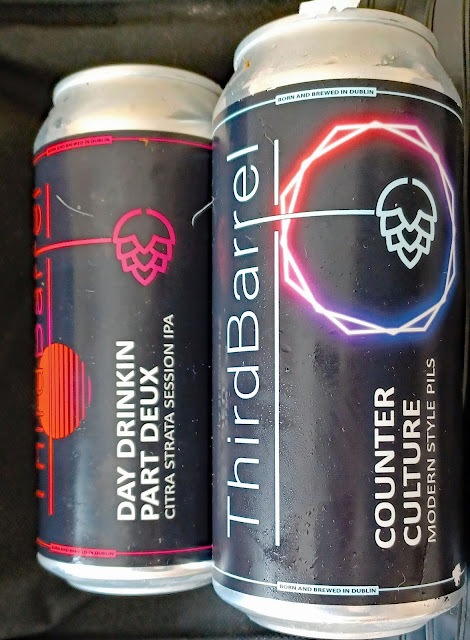 Counter Culture Modern Style Pils (quite a mouthful!) comes in a golden lager colour. Malt and hops share the aromatics here and the engaging engagement continues in the mouth, a mouth full of flavour and refreshment, this clean crisp beer doing its job to perfection.

Two hops feature: German Saaz and Lorien. The latter is the less traditional one, hardly traditional at all as it is a relatively new hop from the American Indie Hops Flavor Project, a hop that has been advanced through the “development process with crisp, refreshing low-gravity beer in mind. This hop has a unique ability to let the tasty malt platform shine, yet contributes an addictive finish of citrus zest, fresh melon, sweet hay and wildflowers, all capped by a cinnamon spice that cleanses your palate and lures you back for more.”

For its part, the more traditional Saaz (this from Germany apparently, rather than Czechia) contributes aromas/flavours of hay, tobacco, and herbal. Not quite the modern magic of Lorien (which echoes some of the Saaz qualities) but still a player.

The Lorien though is certainly full of promise and the excellent lager is a good example and a welcome addition to our bottle shop shelves.

So who are third Barrel? Initially formed in 2016 as a collaboration between two gypsy brands who wanted their own space. Third Barrel has now grown to be one of the most respected brands in Irish craft beer. Brewing everything from the most wholesome Pils to Triple IPAs and everything in-between.

Our one and only passion in life is making savage beer and we love sharing that passion with you.

Wicklow Wolf tell us Toto Sorachi is brewed with Pilsner malt, Sorachi Ace hops for bittering and German hops Huell Melon and Ariana for flavour and aroma. An Italian style Pils, named after an Italian, but no Italian hops.

The Italian? Why, Toto Schillaci of course. The then little known Sicilian struck like an island pirate to snatch a quarter-final winner after a hopeful Pakie Bonner parry and send Ireland tumbling out of the World Cup of 1990 or Italia Novanta as George Hamilton revelled in pronouncing at every single opportunity.

Back to the beer then. It is, as touted, a refreshing pils with bready, malt sweetness, citrus and melon aromas and a clean, crisp bitterness to finish. Excellent then for a World Cup game and will score well in any exciting encounter.

Schillaci, sorry Sorachi, is a versatile hop, excellent in several beer styles, lager among them. It has been used here for its bittering qualities. The German hops Huell Melon (look for Melon, Strawberry, Vanilla) and Ariana (Tropical, Berry, and Jasmine) are employed for flavour and aroma. But, as with most good lagers, the Pilsner malt has quite a say in Toto.

By the way, do you remember which beer Toto later advertised on Irish TV? Check it out here.

One of a series of “Seasonal Small Batch Beer, the range developed as a way to explore our passion for our craft”.

It is a hazy mid-orange with a soft bubbly head. Lots of juicy citrus and exotic fruits in the flavours, dank here too as in the aromas. It has has quite a soft feel on the palate. Lots of promise so far but the expected delivery never quite arrives. It lacks a finish. A bit like Shamrock Rovers against Ghent on the TV.

Rye River say: “In this edition of our beloved Miami J, we collaborated with our friends at Barthhaas X to pack their advanced hop products into this juicy IPA. Lupomax, Incognito and Spectrum have saturated this brew to accentuate all the things we love about the softer side of hops. Brace yourself!”

No doubt this collaboration will have its fans. Different strokes for different folks. I’m not having much luck with collabs this year though there was at least one memorable work between Wicklow Wolf and Mescan. If it weren’t for that and one or two others, I’d be inclined to give them a wide berth