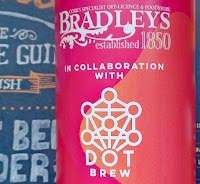 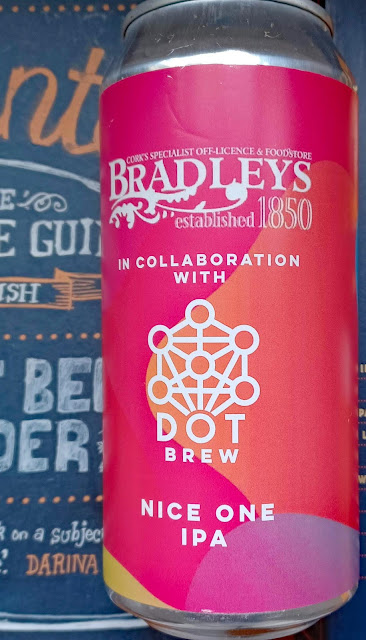 Colour is a nice light gold, topped by a white bubbly top, one with a bit of stamina. Aromas of grapefruit and granadilla sweetness plus a hint of pine resin. Much the same on the palate, the fruit and pine still there plus a touch of peach and apricot right the way to the satisfying finish.

Quite a combination, nothing out of synch here, good mouthfeel too. Excellent on all counts. Just might restore my faith in collaborations!

Geek Bits: Barley, Oats (flaked and malted), and Wheat are all included in the ingredients. And you have a healthy helping of US hops Simcoe and Amarillo.

Michael at Bradleys tells me they are now working with a new Irish delivery courier who use zero emission vehicles: “So whether it's the latest craft beer, fine wine or luxury whiskey, you can shop our online store and have it delivered anywhere in Ireland for just €5.” 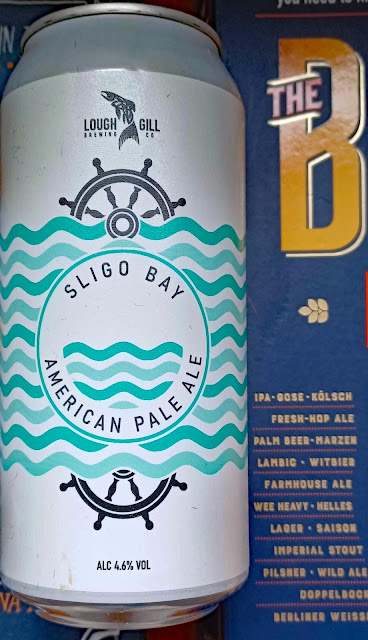 Colour is a light gold, hazy, with a soft white head. Aromas are moderate, led by citrus. Well balanced, as the makers indicate, between hops and malt, refreshing with a dry finish.

Lough Gill are happy with this one: “This American Pale Ale has a stunning bright golden colour. We've brewed it with a mix of cereals & American hops for a hop-forward yet malt-supported flavour. A bit special!”

The independent family run brewery is nestled close to the shores of Lough Gill, Co. Sligo and was established in 2016 by James Ward. Since opening their doors, the team have continued to produce high quality, exciting beers, ranging from bold stouts to brave sours.

The water, along with the name, come from nearby Lough Gill and that was also the name of the old brewery. It is not the first brewery for James and wife Valerie. Their initial venture, the White Hag, was the first brewery in Sligo for the best part of a century. After a couple of years, he sold it to its investor group and launched Lough Gill, with Anderson’s Ale, in November 2016.

Colour is a mid-gold with a big soft white head.  Aromas are citrusy, with more exotic notes as well, such as Mango. The exotic flavours from the American hops are immediately apparent in the mouth all the way to a satisfactory smooth dry finish. Haven’t seen the hops detailed anywhere though they do mention on the web shop that they’ve used a “blend of American hops balanced by the delicate yet complex malt bill”.

Stone Barrel beers are brewed by Third Barrel in Dublin. So, who are Stone Barrel?

“Well, what can we say, we’re two home-brewers who brew bigger.

Niall Fitzgerald and Kevin McKinney are the founders, brewers and driving force behind Stone Barrel Brewing. We both have a huge passion and appetite for all things in craft beer, from making to drinking and everything in between.

We launched Stone Barrel in November 2013 with one simple aim, to brew the kind of craft beers we love drinking. The good thing is that we love them all!

Like most home-brewers, we dreamed of one day opening a brewery. So, after a lot of planning, stress, blood, sweat, tears and hugs, we’re here. We’re living the dream and dreaming of beer! 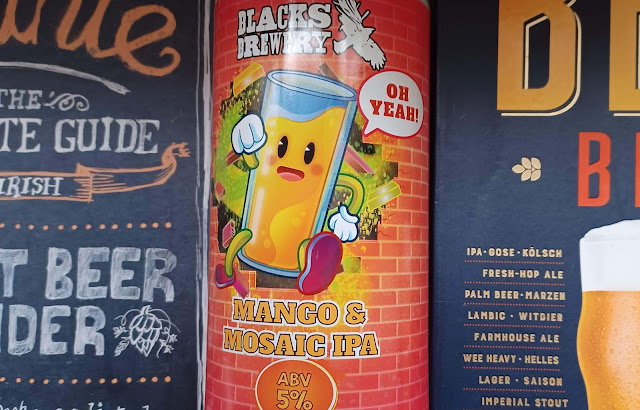 Summer drink with a summer colour, shiny gold, and a white crown. Fruit aromas, with mango (which is included as an ingredient) heading the exotic posse. And so it goes onto the palate, those mango flavours surfing across with the Mosaic catching up towards the finish to give you something of a refreshing crisp and bitter finalé. Not a bad outcome at all! If you like Mango a lot.