A Quart of Ale± #123. On the craft journey with Third Barrel, Rascals, Wide Street and Larkins 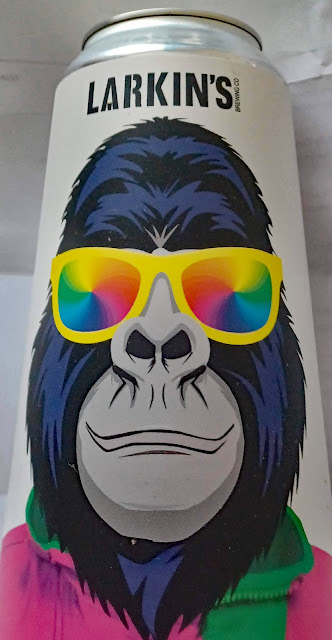 On the craft journey with Third Barrel,  Rascals, Wide Street and Larkins

Our Citra Strata Session IPA is the second in Third Barrel’s series of summer slammers. This one is double dry hopped with Citra and Strata. The first was  called Day Drinkin and was a one hop (Simcoe) beer. That drew a great response and so they were inspired to go again. And here we are.

The current slammer is a hazy pale orange one with a soft white head. Aromas are quite citrus-y. But it is with the impact on the palate that it makes the big impression here. The citrus led fruit and the lip-smacking finish, all in a dank envelope, make this one to note. 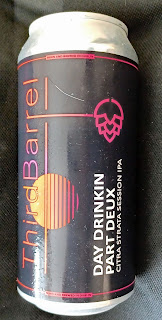 We summed up the first Day: Day Drinkin, at the 4% abv, would certainly make for a good session, night or day. As they say themselves: “be sure to pick up a few for your next bbq, camping trip or even just sitting on your own in the kids paddling pool.”

It seems the opportunities for outdoor recreation are fast fading but there’s nothing to say you can’t enjoy one or more of Part Deux inside, or maybe under an awning, even a tent. Made for a session and well made.

"Initially formed in 2016 as a collaboration between two gypsy brands who wanted their own space, Third Barrel has now grown to be one of the most respected brands in Irish craft beer. Brewing everything from the most wholesome Pils to Triple IPAs and everything in-between.

Our one and only passion in life is making savage beer and we love sharing that passion with you.”

“The finest NZ hops fused into a tropical & citrus flavour bomb…it’s all peace, love and juice!”

That is how Rascals introduce this collaboration with Yeastie Boys. Falls flat though; this flavour bomb lacks a detonator.

Let us have a look. And a taste. Orange is the colour, hazy for sure. Nice white head but doesn’t hang about. Aromas are rather modest, soft notes of citrus and also tropical.

They have deployed a quartet of New Zealand hops here: Galaxy, Nelson, Betty and the lesser known Riwaka and expected flavours include citrus and tropical. Clearly, a lot of work from the collaborators to get here. Was it worth it? Not for me.

What I did enjoy from Rascals recently was a pint of their superb 4.4% stout on draught at the Celtic Whiskey bar in Killarney. Big thumbs up for that one! 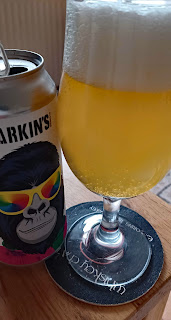 This little Sesh, with a punky gorilla on the front label, could well be described in my shorthand as troppy, meaning hoppy with tropical aromas and flavours. And it’s true enough as regards the aromas, pretty big indeed. And it is quite juicy and with much the same fruits on the palate.

So no bother in agreeing with Larkin’s Insta summation: “Our new improved session IPA with bigger aroma and body.” Well balanced beer, easy to drink and easy to enjoy.

The label claims it’s an East Coast style and, that is confirmed by tasty tropical notes, less bitterness and the hazy appearance (not so hazy that you can’t see the fountains of bubbles rise to the top).

Ingredients are listed as Barley, Wheat, Oats, Hops, Water and Yeast. Tiny is part of the new Larkin’s core range and is available in single cans and in “a great value” 440ml 4 pack. One of those beers that might well make the jump to draught.

Wide Street’s Belgian style Pale Ale has a light, almost lemony colour with a soft white head that persists a while over the haze. Aromas and flavours are tropical and hoppy and there is the slight clove-ish hint on the nose and on the clean and refreshing palate, the aromas and flavours coming, Wide Street say, from the freshest American hops (El Dorado and Idaho 7 in this case).

An interesting, very dry and lip-smacking beer from the Longford brewery.

Best paired with your favourite music, they hint!