The Franciscan Well hosts the First Beer Festival of 2020 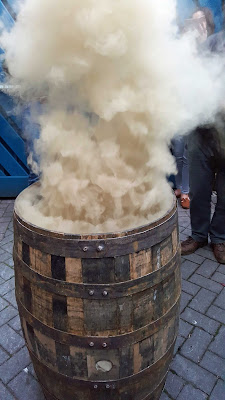 
Kate Clancy of Franciscan Well has just been in touch to say the North Mall brewpub will be running 5 key Irish beer/spirit festivals. "These will include, The Cask & Strange Brew Festival, The Easter Beer Festival, The Fem-Ale Festival, The October Beer Festival and The Espresso Martini Festival brought by MONK our cocktail bar. Of course first up is our Cask & Strange Brew Festival which celebrates cask conditioned ales from a variety of Irish brewers and is the only one of it's kind in Ireland."

Now in its 8th year, the Franciscan Well’s Cask Ales and Strange Brew Festival is the first beer gathering of 2020, running from Thursday the 30th of January to Saturday the 1st of February.
The festival celebrates cask conditioned ales from a variety of Irish brewers and also show cases their growing experimentation & their ability to challenge the norms of brewing by hosting a range of special brews using curious and interesting ingredients.
‘Cask beer has become increasingly more popular, the beer is much lower in carbonation and is served at room temperature which allows the beers full flavour to shine through’ says Kate Clancy, Marketing Manager of the brewpub.
Lough Gill, Dot Brew, West Cork Brewery & 9 White Deer are just some of the breweries at the festival with over 20 cask engines rotating a range of brews. All breweries attending will also compete in the Beoir Cask Competition which will be judged by the national beer enthusiasts club on the Saturday 1st.
Because of the successful collaboration between Franciscan Well & Jameson in creating Caskmates there will be special whiskey & beer pairing session on Saturday 1st at 4pm. ‘ We will conduct the tasting in the very room where Caskmates was born, including a boiler maker with  two whiskeys and two beers’ . This session is free but arrive early to avoid disappointment’ Says Kate.
As always festival goers will be able to enjoy freshly made wood fired pizzas from Pompeii, sip on the Well’s new cocktails from the MONK cocktail bar and kick back to some live entertainment.
The Franciscan Well, based on North Mall will play host to many key beer festivals though out the year, such as their annual Easter Beer Festival, October festival and their newly added Fem-Ale Festival which celebrates women in drinks industry.
Admission is free and doors open at 5pm on Thursday 30th and 1pm on 31st & 1st.
beer festival Franciscan Well