The much loved salmon, popularly known as Goldie, swims forever on top of the tower of St Anne’s in Shandon, in one of the most elevated positions in Cork City. The fish and ale restaurant named Goldie, in the flat of the city, is already in an elevated position when its comes to matters fish on the plate. Our first meal there a few months back was impressive, this latest even more so.They appear to be getting into their stride. Who knows what heights this creative kitchen will hit in the seasons ahead.

Lots of hard work here too. After all, they get the whole fish in here every morning. But Head Chef Aishling Moore is relishing it, the head to tail ethos, the challenge that each delivery poses, plus the freedom to create that it also makes possible. “I’m living the dream,” she said on our latest call.

The Goldie Menu has three main sections: Snacks, Small Plates, and Mains. You also have sides and desserts of course. And then there’s the beers, all from their own brewery across the road in Elbow Lane, ales formulated by brewer Russell to “specifically suit the foods that we offer”, three on draught, two in bottle. They do have a matching wine list of course and, on the night, had some interesting special offers on.

You can expect to see quite a range of fish on the menu. On our visit last week, squid, prawn, ling, oyster, mussel, salt fish brandade, plaice, ray, and monkfish were all in the mix to some degree or other. No meat here but vegetarians are catered for at all stages including a mains of Piccalilli Panisse, Coolea Cheese sauce, and kale.

We started with beers (Elbow Lager and Jawbone Ale - all their beers are named after Cork lanes) and a couple of snacks. The Chickpea Wafer, fennel and Coolea Cheese, was a delicious wee bite but my favourite was the Salted Ling fish finger, with gherkin ketchup.

CL continued on the vegetarian path with a small plate of Beetroot, gherkin ketchup, yogurt and horseradish. Absolutely superb, so good I persuaded her to share. She did well too though as she was full of praise for my Tempura of Oysterhaven Oysters, with ponzu sauce.

That sauce was magic and indeed I thought the combination well capable of converting oyster haters and when I mentioned that to our server, she said she’d seen it happen here. So if you are a bit doubtful about oysters and you find yourself in Goldie, do go for it. Other small plates on the night included Steamed mussels, creamed watercress and cider and also Salt Fish Brandade, seaweed cracker, pickles.

Now, for the main event. We were both tempted by the Whole Roast Plaice, bok choi, café de Paris but that will have to wait for another night! Instead we went for the Ray and Monkfish dishes and a delicious side (shared) of Sea Salt shoestring chips.

Sauces and relishes here are key - like the ponzu earlier. Now it was turn of a well-judged red wine sauce to work its magic with the Pan Fried Ray and the parsnip. And superlatives too for the oyster velouté  and fennel that enhanced the Pan Fried Monkfish. Umami on the double.

Just a short dessert list. We had tried, and enjoyed, the Killahora Orchard apple port Panna cotta on the previous visit and this time picked the equally enjoyable Blood orange posset, brown butter Madeleine, white chocolate and tarragon ganache. Quite a delightful plateful that we shared.

Then time to say goodbye to the very friendly and efficient crew here. But we did have a peek at the upstairs room that has just been opened for service. Downstairs, it is very bright and modern. Upstairs, there is more by way of decor, lots of foliage. Will definitely take the pressure off downstairs at weekends and would also be a lovely room for a midweek party (up to 15 people or thereabouts).

Party or no party, go fishing folks! Head to Goldie. 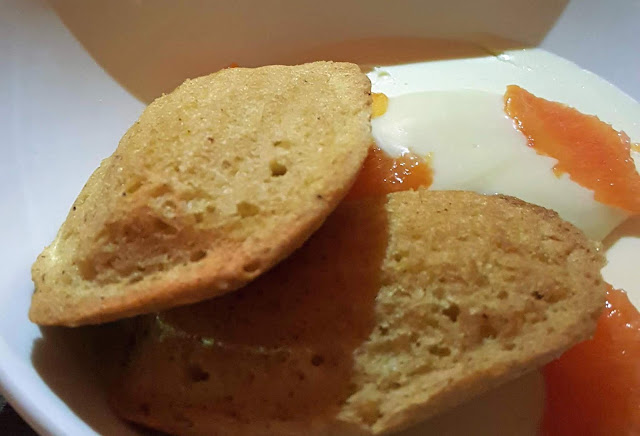