Two Outstanding Reds despite contrasting growing seasons in Yecla and Valpolicella
Drought was a regular feature in Spain’s Yecla in 2016, resulting in very low yields, but that in turn led to increased concentration in the Monastrell grapes. No complaints about the season in Valpolicella in north east Italy and the results were excellent. Here, the wine-maker availed of a version of the Ripasso method to enhance concentration. And so we have two excellent reds for you to enjoy. 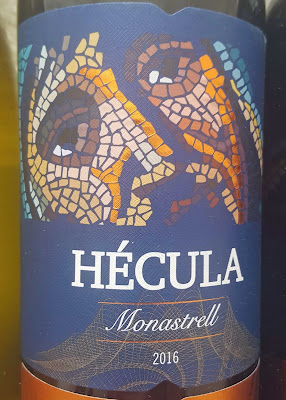 Just a few info bits and pieces for you…
“Hécula” is the name of the wine and it is produced by the Castano family from the Monastrell grape in Yecla ( a small wine DO in the north of Murcia, about an hour inland from Alicante). The grape is known as Mourvedre in France and the fruit used here is from 40-year old vines.

Dark intense ruby, legs slow to clear. Inviting aromas of blueberry and raspberry. Not at all shy on the palate, soft and elegant with fresh juicy raspberry flavours, a hint of the oak too, quite concentrated. A long and substantial finish. This wonderfully harmonious wine is Very Highly Recommended.

Drought was a regular feature in Yecla in 2016, resulting in very low yields and that probably accounts for the extra concentration of flavour. After fermentation, the wine was aged for six months in oak barrels of which 50% were new. The oak used was 80% French and 20% American. It is untreated and unfiltered so you expect to see some sediment. It may be best to decant. I didn’t take my own advice but, as it happened, there was no sediment.

Mid to dark ruby is the colour of this blend of 70% Corvina/Corvinone, 25% Rondinella, 5% Sangiovese. Quite aromatic with cherry prominent and some scents too of chocolate/coffee. Juicy and darkly flavoursome, velvety smooth with refreshing acidity. Harmonious all the way with silky tannins in a long and richly satisfying finish.

Back in 2002 when Vino Italiano was first published, its authors described  Allegrini as one of the biggest names in Valpolicella. They added: “the value-priced Palazzo della Torre (which includes 30% dried grapes) is a fruity and fun Valpolicella with more meat than most.” Still holds true today and this 2016 is Very Highly Recommended. 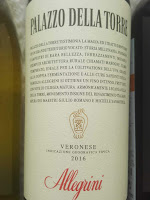 The Modern History of Italian Wine praises the “fruit philosophy” of the Allegrinis, first espoused by Giovanni, “a true innovator of the 1960s”, a philosophy based on preserving the fruit from the vine to the bottle.  They are based in Fumane, with Lake Garda about 20 minutes to the west and Verona less than 30 to the southeast.

Nowadays Franco Allegrini (of the new generation) uses the modern version of the traditional 'ripasso' technique for Palazzo della Torre, drying a proportion of the grapes in the 'Terre di Fumane' drying centre, to intensify “the character of this vineyard”. And, the 2016 season and the result here “was one of the best ever, outstanding for its great balance and elegance”.

Palazzo della Torre pairs effortlessly with various Italian dishes, above all risottos, especially those flavoured with saffron, porcini mushrooms and pork; classic dishes such as pasta with Amatriciana and Carbonara sauces, baked lasagna, gnocchi with gorgonzola cheese and walnuts; grilled meats and roasts. It also excels when matched with Parma ham and fine-cured Zibello pork loin, as well as medium-matured cheeses, especially Parmigiano Reggiano (Parmesan), Pecorino and Monte Veronese. Anything Italian by the looks of it!