Miguel Torres: Message in a Bottle 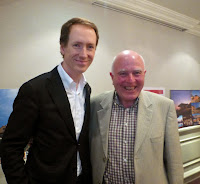 The more we care about the earth, the better our wine.

Climate change pops up in conversation and some people switch off - nothing to do with me. That’s not the way the Torres wine family see it. With the opening sentence above as motto, they are doing something about it with a programme called Torres and Earth.

Miguel Torres, one of the family’s fifth generation, was in Dublin's Westbury Hotel last week for a tasting but first he spoke of the family and the threats from climate change that it is seeing “more and more”. “Vineyards are very much at risk. Hailstorms are an example.”

Torres are well known for their concern for “the earth and its resources, not only for this generation, but also for future generations”. Climate change has heightened their concern and led to a continuing drive for improved sustainability. For instance they have devised a method of turning vine cuttings into a source of energy, are using solar panels for much the same purpose and have a 2020 target of reducing CO2 emission per bottle by 30% by comparison with 2008.
Fair Trade has long been a Torres concern, beginning soon after their 1979 start in Chile. Miguel explained that Fair Trade was good for their growers there and also for the company itself. If they hadn’t paid a fair price for the grapes, the children of their growers would have left for the cities as has happened elsewhere. Now, seeing their parents fairly paid for their work, enough children stay behind to ensure the future. Torres was the first private company in Chile to be designated Fair Trade.

Back to their base in Catalonia and here they have “recuperated ancient Catalan varieties, 38 in all. Not all are good but six are top quality, very well adapted to a hot and dry climate”. Torres are also experimenting with growing vines at higher levels.

And then there is the never ending problem of disease. Indeed some diseases, particularly fungal, may be due to modern machinery which are rough on the vines. I think we in Ireland have seen that in the way modern machines “batter” the roadside hedges in the process of trimming them. Miguel detailed some trunk diseases, possibly facilitated by the rough "handling" by machines, and said they were working towards a cure. Obviously others are too and he said “one treatment to cure all would be in great demand!”.

Miguel said that while Torres “have lots of vineyards, it is the people that are important. We have 1300 people, a team". The family are of course part of that team. He also said that people buying wine should rely more than the winemaker rather than the appellation. “An appellation can produce some great wines but also some terrible ones’.
“We are very much into organic viticulture, being so aware of global warming. Today's decisions will have to be dealt with down the line.”

Torres are not interested in expanding beyond what the family can handle. “We want to continue as a family, pass it on to the next generation”. One of the benefits of this, at least in the Torres case, is that no less than 95% of profit is re-invested, much of it in research.


They are of course a Spanish family. “Penedes is our hometown and by the way, watch out for a new wine from here next year. It will be called Purgatory, not because we are sinners!”

He called his aunt Marimar an inspiration. She helped boost sales in the US from 1975 and now runs the 57 hectare Marimar Estate in California's Russian River valley, producing mainly Pinot Noir and Chardonnay wines, all organic with a focus now on biodynamic.

“Chile is an ideal country for wine,” said Miguel. “All our vineyards, total 400 hectares, are organic.” They began here in 1979. His father and grandfather brought in the first stainless steel tanks, along with the first new oak casks in over forty years, to revolutionise the industry there. In recognition of that and their long-term commitment, the Chilean government presented Miguel A Torres with the Order of Bernardo O’Higgins in 1996.

There have also been major honours for the family in Catalonia. It seems they contribute wherever they are. The earth could do with more companies like this.

The Bottles
Frustration ran high in the Torres stronghold of Penedes in the late 70s. They were producing what they thought were great wines but where was the recognition?

Then  came the breakthrough, in Paris of all places. Torres entered their Gran Coronas Mas la Plana into the 1979 Gault-Millau blind tasting Wine Olympiad and it won, leaving wines like Chateau Latour and Chateau Haut-Brion behind. The win gave Torres the recognition it craved and the confidence to take on the world.

And from that same 29 hectares vineyard, we had the Mas la Plana 2010, a 100 per cent Cabernet Sauvignon, full of freshness, fruit and spice. Miguel said this was a great wine to celebrate its 40th anniversary - the wine that won in Paris was from 1970.

You could taste why Miguel would be proud of this one but perhaps he was just that little bit prouder of the next, the final red of the tasting. This was the Grans Muralles 2004 and the extra pride was because this was composed of Spanish varieties, including two of those “recuperated”. The two are Garró and Samsó and the other varieties are Monastrell, Garnacha Tinta and Carińena, all of them planted within the walls of this single vineyard, dating from the Middle Ages. The wine is full of character and complex. “Still young with a long life ahead”.

Before these two, I had more or less settled on the Salmos 2012, from their Priorat vineyards, as my favorite. Priorat is one of the smallest appellations and the wine is named after the psalms the original monks sang (they weren’t allowed to talk).

It is a blend from two vineyards, one at 200 metres, the other at 500 (for the Carińena). The other varieties are Garnacha Tinta and Syrah.

Carińena is becoming increasingly important and, for its contribution to colour and acidity, is being used in this particular wine in “increasing proportion and could be a key variety in the future of Priorat.” Just loved its fruit, spice and acidity, suited me very well indeed.

We had started the reds with quite a lovely Tempranillo, the Celeste 2012 from Ribera del Duero. It is made in a Rioja style but is less acidic. It is a light red yet quite complex and “delivers the fruit very well, tannins yes, but quite elegant”. 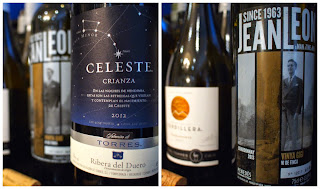 Then we went down to Chile for the next red, the Cordillera Carignan 2009 from the Maule Valley. By the way, Miguel advised going to the south of Chile if you do get a chance to visit. The original Carignan vineyards had been abandoned but Torres pruned them and started producing again. This is a very good example, fresh fruit and acidity, tannins, a little spice with a good finish. “Not heavy, but fresh!”

While we sampled the final white, the Jean Leon Vinya Gigi Chardonnay 2013 (Penedes), Miguel revealed that the first Chardonnay vines were “smuggled” into Penedes and, after a struggle, were eventually recognized for appellation purposes. Aromas of tropical fruit with an unctuous creamy palate and a long finish makes this a little bit special.


Another Chardonnay, from the Limari Valley in Chile, had preceded this one. It has been aged for 7 months in French oak (30% new, 70% second year). They are decreasing the oak though. “In Chile, the nicest thing you have is the fruit - no need for make-up!”, said Miguel. “We are trying to keep the acidity and freshness”. And it is fresh with good acidity, great flavor and a little spice. I think I may have a slight preference for this over the Jean Leon.


We had started with two grapes that I enjoy: Verdejo and Albarino. First up was the Verdeo 2014 from Rueda. No wood used here at all. The vintage had been “cool”. This was very aromatic and beautifully fresh.


The 2013 Albarino came from Pazo das Bruxas (bruxas means witches!) in Rias Baixas where the grape “is a key variety”. Some grapes for this come from close to the coast (for better acidity), some from a little bit inland (for the body). “You can get red apple here; it has good density and finish”. He told us that Albarino can age well, 7 or 8 years, and can get more complex. This is excellent as it is, with great freshness and flavour.

I know I've picked Salmos as a favourite but to be honest I wouldn't like to leave any of these behind me. It was a great set from Torres. So muchas gracias to Miguel for the talk and the wines and to Findlaters for bringing it all together.